Widow who lost home to fire appeals for help to rebuild

The pain of losing a home is difficult to endure, says 53-year-old Dularie Lall of Mahaicony, East Coast Demerara.

After the death of her husband, Mrs. Lall was left to raise six children on her own. 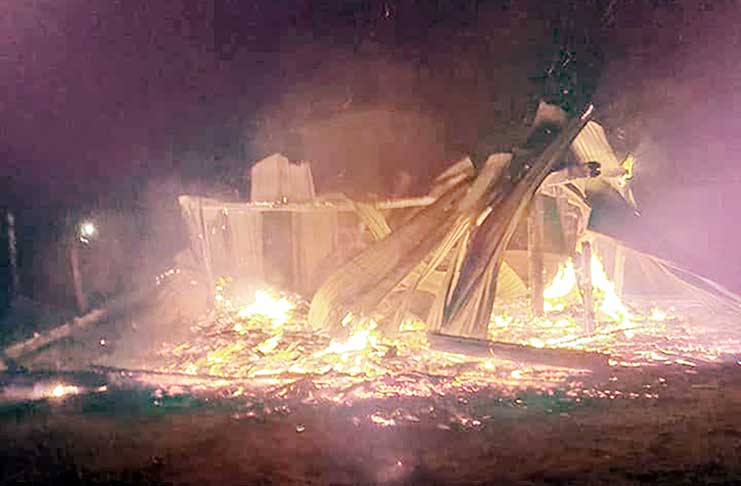 The home under fire.

Now she finds herself once again in a trying situation after her home, which she had occupied for over 20 years, went up in flames.

The mishap occurred on the December 16, 2019 at Novar, Mahaicony.

At the time, Mrs. Lall was at home with her four younger children.
Speaking with this publication yesterday, an emotional Ms. Lall recounted watching the home in which she had lived with her husband, go up in flames.

The family was unable to save anything.

According to the distraught woman, she and her children are presently seeking shelter at the home of her eldest daughter, who lives two villages away. While she is grateful for the assistance, the home is too small for so many occupants.

Mrs. Lall is appealing to the public to assist the family to rebuild their home.

“Whatever you have you can give me, due to my situation I am accepting. If you don’t have money to donate that is not a problem, please send some clothes and a mattress so that the children can have something to lie down on when night come.” 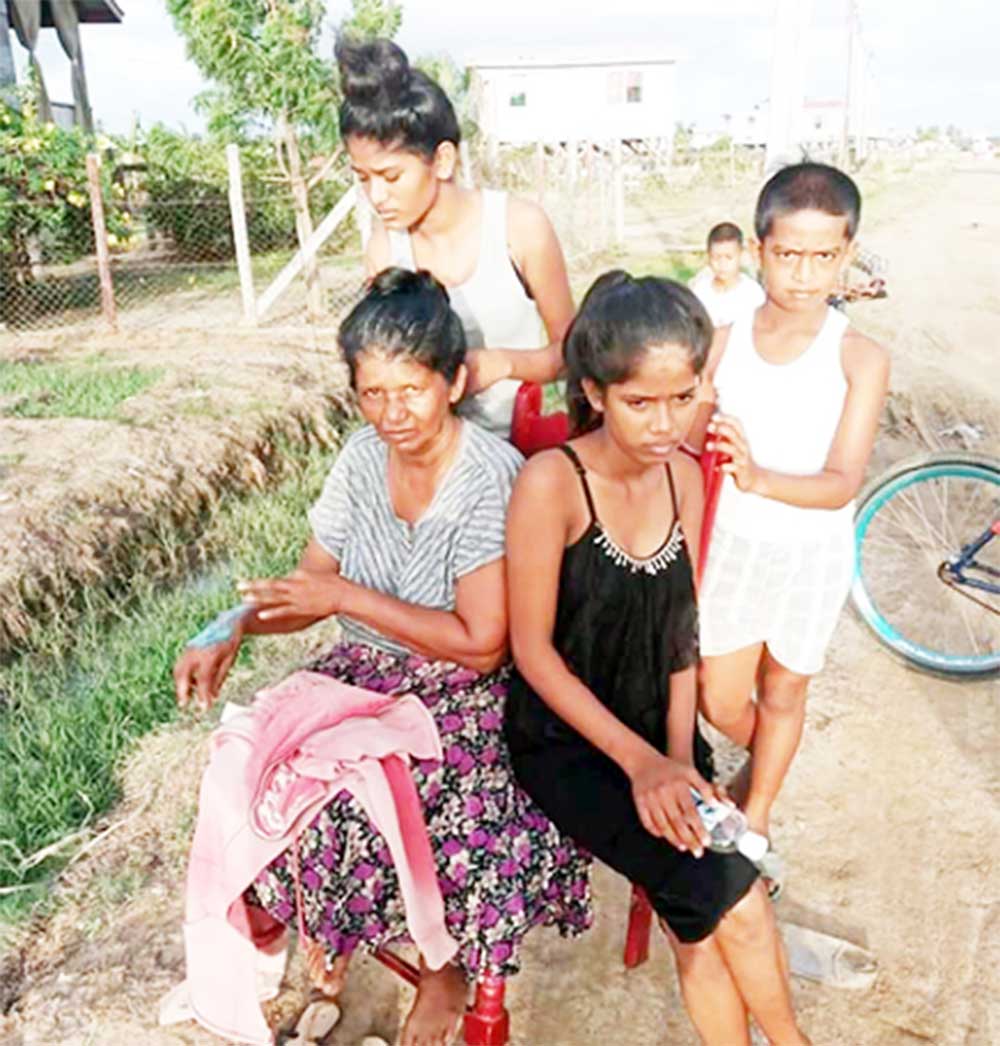 Mrs. Lall and her children

“I am willing to go and look for a work but I lately did a surgery and the doctors advised me to stay out of the night due and to avoid lifting heavy objects.”

I get a big son but he ain’t working either because he was born with a condition. I really need some help to build back my house, I am asking if you can send some zinc sheets and even some boards for me to at least start the construction. And I believed that once it’s started it will finish.”

According to reports, Ms. Lall was asleep in her home when she felt her hand burning.

Upon waking up, she saw flames inside her bedroom and immediately raised an alarm.

“When I woke up and see the fire the only thing I could have done is get my children and get out of that building.”

Kaieteur New publisher Glenn Lall is willing to donate GYD$100,000 with the aim of starting the rebuilding process.

Everyone on the board here should try to give something.

Where is Irfan?  This is the ideal time for him to demonstrate his humanity by committing future government resources to rebuilding this woman's house.

Django, time to earn your stripes. You are taking over the site so organize it so we can help this family.  You should take the lead. If you say you can take control and deliver the resources i am sure we can help.

If everyone of us put in 20 US or Canadian.  That is a lot of Guyana money.

If everyone of us put in 20 US or Canadian.  That is a lot of Guyana money.

Easy to do, but how do we know that the family will actually get all of the money donated. Who will be the middle man. I am willing to pledge some money.

Amral, many years ago I ask that you create an account for such purposes wher GNIERS can give. You are the only one I trust on this board except the Prince!!

Put me down for 20 dollars!

Money can be sent directly to recipient thru Moneygram. I will contribute towards donation.

Django, time to earn your stripes. You are taking over the site so organize it so we can help this family.  You should take the lead. If you say you can take control and deliver the resources i am sure we can help.

Contribution can be sent easily thru Moneygram, the recipient will uplift themselves.

If it's one donation from GNI, I can send my money via ach or paypal to that person.

I trust whomever agree to send the money

I got mrs lall to reply to me

I got mrs lall to reply to me

Thank you Bossman. This Family needs all the help they can get. God's Blessings to them.

However our focus should be on what we all can do, collectively and individually.

I am having an issue, this American Citizen thing keeps popping up

If Mrs Lall can provide a bank account #. Money can be directly deposited to this account from Canada and US. Amral asked her if anyone set up such account for her .

I have to go to work soon, if someone wants to follow up with the lady, please do. I am not going to be much help for the rest of today.

I will try from my end and share any information I have.

Please, someone who is capable take over from Amral. I really want this to work. This family is hurting enough and maybe our contributions will be of great help.

Here is my idea , what's your thoughts.

I think  the members can make contributions ,send it to an individual and transfer the money directly to the recipient via moneygram.

A group of us raised some dollars for community center recently . That's how we did it.

Maybe someone open a PayPal acct and everyone remit to that acct.  Then make one Moneygram or Western Union transfer to the family.

Ok Guys, I have someone who will reach out to Mrs Lall to get all her information.. and you guys can make direct contribution to her .

when I get the information, I will posted.

Ok Guys, I have someone who will reach out to Mrs Lall to get all her information.. and you guys can make direct contribution to her .

when I get the information, I will posted.

If not, I can ask Pandit Sugrim from Humanitarian Mission if he can assist.  They are building homes for the needy in Guyana.