Supported by a large band of home fans, reigning champions Showstoppers produced a clinical display to halt the ambitions of ESPN to win the final of the West Demerara / East Bank Demerara Zone of the Guinness ‘Greatest of the Streets’ Competition which ended on Friday at the Pouderoyen Tarmac. 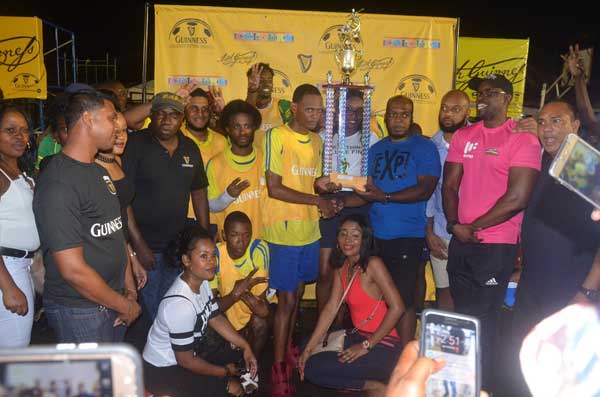 Close to two thousand fans braved the inclement weather to witness the highly anticipated final that featured arguably the two best teams in the competition and while the surface was a bit discomforting due to the rains, Showstoppers was the team that seemed to master the conditions better and romped to an easy 3-0 win and the top prize of $400,000, championship trophy and a spot in the national playoffs.
It meant that it was the third time in succession that Showstoppers have won the title and therefore can rightly assume the title of ‘Kings’ of the West Side.
It was once again the Marvin Josiah and Dexroy Adams show as they cut shreds in the ESPN defence time and again, before Josiah opened the scoring in the 8th minute of play, firing into the goal.
Josiah oozing with confidence and aided by the vociferous home support gave his team a 2-0 cushion ten minutes later when he netted his second with a cracking shot into the goal.
The half came with the hosts enjoying a comfortable 2-0 lead, but with ESPN’s loaded talent including the skilful Pernell Schultz and Trevon Lythcott, they knew that they had to remain focused since those two players could turn a game on its head in a jiffy.
However, coming out in the final period, the die was cast after one minute of play when the prolific Adams fired into an empty goal to send their fans into wild celebrations and confident that they had secured another title.
ESPN on the other hand had very few opportunities, but continued to give it their all, while Showstoppers remained relentless in their search for more goals.
In the end, the final whistle came with no addition to the scoreline, but the home fans invaded the playing area in their droves to celebrate with their players. 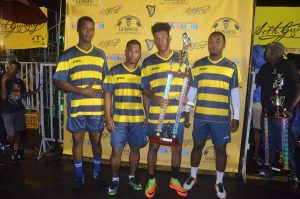 ESPN did not go away empty-handed and won $200,000 for their efforts.
In the third place playoff, West Side Ballers defeated Dream Team 2-0 in a penalty shootout after regulation time failed to break a 1-1 stalemate.
West Side Ballers took home $100,000, while Dream Team’s efforts made them $50,000 richer.
In the Plate Section final, Ballers Empire squeezed past Rising Stars 1-0 in a penalty shootout after their encounter finished 0-0 in regulation time.
They went home with the $60,000 winner-take-all prize.
A number of senior personnel, from Banks DIH Ltd including Guinness Brand Manager Lee Baptiste, GT Beer Brand Manager Jeoff Clement and representatives from co-sponsor Colours Boutique witnessed the final.

Sign In To Reply
Post
Current Visitors: 176 (6 members, 170 guests)
Welcome to the Original Guyanese Discussion Forums, first established in 1996. Here you can discuss, ask questions or generally debate anything related to politics, movies, music, health or just gyaff away your day/night here. A note of warning, the Political forum is not for the faint of heart.  We do have some rules, so please adhere to them .
Do not post any messages that are obscene, vulgar, sexually-orientated, racist, hateful, threatening, or that otherwise violate any laws. Do not post any messages that harass, insult (name calling), belittle, threaten or mock other members.

Prashad replied:
Thanks Cain. The wife told me that there is a French area there. I don't know one word in French.