…AFC Executive to meet on Sunday to discuss fallout

With yet another fallout between A Partnership for National Unity and Alliance For Change, senior People’s National Congress Reform (PNCR) member Dr Karen Cummings has trivialised the concerns of the smaller coalition partner by indicating that the party will move forward with or without them. 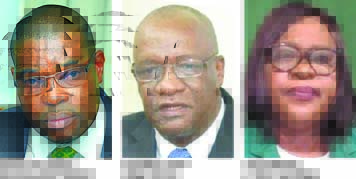 This latest fallout stemmed from the election of the Chair and Vice Chair of the Region Four Regional Democratic Council (RDC), in which the AFC was snubbed for the position of Vice Chair despite a previous agreement between the two sides.

AFC had nominated Neilson McKenzie for the position, while APNU nominated Samuel Sandy and the People’s Progressive Party nominated Desmond Morian. Both the APNU and PPP nominees had 14 votes each, and the AFC had five. But the Chairman, APNU’s Captain Daniel Seeram, using his deciding vote to break the tie, voted for Sandy.

During a virtual press conference on Wednesday, Dr Cummings, who is also an Opposition Member of Parliament (MP), was present at that RDC election on Monday, and described the process as transparent but noted that she was unaware of the previous arrangement to give the position to the AFC.

“It was very fair and transparent [process]. I wasn’t privy to original decisions, but what I know, sitting there at that point in time, it was unanimous,” she stated, while recalling the process.

However, when asked about the current status of the relationship of the coalition, Dr Cummings noted that the Coalition is on a forward trajectory, and it’s up to the parties to follow along.

“We all have freedom of choice, and you’re free to come. But we are accommodating, we’ve always stretched out the olive branch to you, and so it’s up to you. But this is a movement, we are moving forward; so, you come with us, you going forward; if you not with us, you stay at the back. But, like everything else, we want to come together. As I said before, united we stand; divided we fall. So, we don’t have time for travail and cavil, and using the devil’s advocate to disturb us, because there is a lot of distractions here,” she asserted.

However, the PNCR led-APNU, which is the majority party in the Coalition, has been embroiled in an internal power struggle that has been playing out publicly. Already, two of the parties in the five-member partnership – the Working People’s Alliance (WPA) and the Justice For All Party (JFAP) – have resigned, citing sidestepping of smaller parties by the PNCR, the leading party in the APNU grouping.

This is at a time when there are already tense relations between the two coalition partners. The AFC had to settled for a 30-70 per cent division of parliamentary seats in a revised Cummingsbug Accord – a significant reduction from the initial 40-60 per cent arrangement.

However, this tension was heightened over the past days following the recent controversy surrounding the election of the Region Four Vice Chairman. In fact, this issue has already resulted in David Patterson tending his resignation as General Secretary of the AFC.

Patterson had helped craft the revised agreement and brokered the arrangement for the AFC to get the Vice Chair positions in Regions Four and Seven.

But Dr Cummings on Wednesday argued that what transpired at the Region Four RDC is in keeping with the 70-30 formula between the APNU and the AFC respectively.

Nevertheless, Opposition Leader Joseph Harmon has since indicated that that party would be investigating what transpired at the Region Four RDC election on Monday last.

Meanwhile, the AFC on Wednesday disclosed that an emergency meeting of the party’s National Executive Council has been scheduled to discuss the way forward following the Region Four RDC election. The NEC is the highest decision-making forum of the AFC in between its National Conference.

Further, at Wednesday’s press conference, Coalition MP Tabitha Sarabo-Halley had contended that while the Coalition may have issues now, it does not mean the parties cannot overcome these.

She pointed to the fact that the world over, coalitions are generally never solid, and is in fact a work-in-progress that always has to be strengthened. (G8)

Perhaps the AFC is tremendously hard-of-hearing and not understanding the firm words .. Gwan dah side yuh AFC .. from the PNCR.

Water down AFC will declare DEAD on Sunday.

Water down AFC will declare DEAD on Sunday.

The damage is already done. The AFC will have to go it alone and hope for the balance of power.

The AFC is the biggest flop in Guyanese politics. Started well and then it fastened itself to the PNC rear end. Ram and Mo brought shame to themselves and the nation.

The AFC has some assets that can be absorbed into the PPP.

The AFC is the biggest flop in Guyanese politics. Started well and then it fastened itself to the PNC rear end. Ram and Mo brought shame to themselves and the nation.

Would the AFC able to take their 30% of seats with them or the agreement would allow forfeiture of the seats to the PNC? Seems whatever the KFC does, the will hold green katahar.

The PNC is asking the unnecessary questions and blaming the AFC. They no longer have any time for Ramjattan and his group of rejects from other political parties.

Sign In To Reply
Post
Current Visitors: 159 (6 members, 153 guests)
Welcome to the Original Guyanese Discussion Forums, first established in 1996. Here you can discuss, ask questions or generally debate anything related to politics, movies, music, health or just gyaff away your day/night here. A note of warning, the Political forum is not for the faint of heart.  We do have some rules, so please adhere to them .
Do not post any messages that are obscene, vulgar, sexually-orientated, racist, hateful, threatening, or that otherwise violate any laws. Do not post any messages that harass, insult (name calling), belittle, threaten or mock other members.