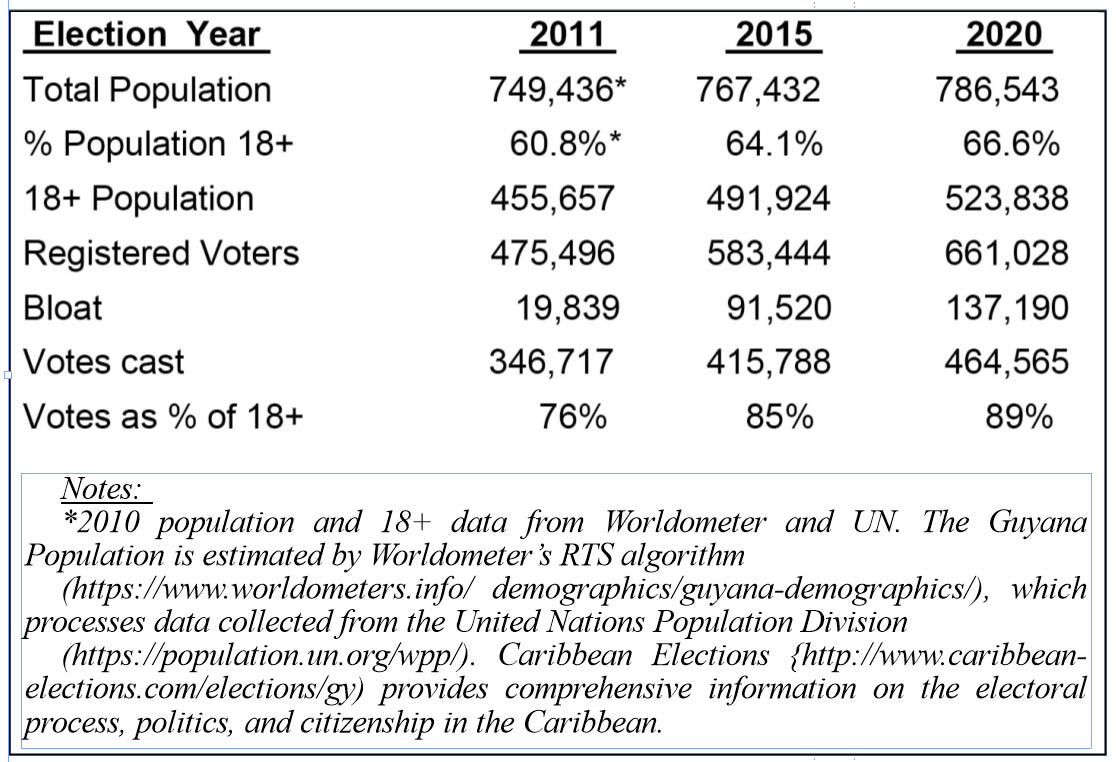 It is very plausible that 464,565 Guyanese cast their ballots in 2020. This number represents 89% of the estimated 523,838 citizens, 18 years and over, living in Guyana in 2020 who were thereby eligible to vote (see Table). This level of turnout may be startling for Guyanese but is not unusual globally, turnouts in recent elections were above 80% in 20% of countries. Uruguay (90%), Bolivia (89%), Ecuador (82%), and Argentina (81%) among 13 South America countries and Antigua & Barbuda (90%), The Bahamas (87%), Cuba (86%), and Aruba (81%) among 19 Caribbean countries are regional examples of high turnouts. (www.idea.int/sites/default/files/publications/voter-turnout-trends-around-the-world.pdf#) 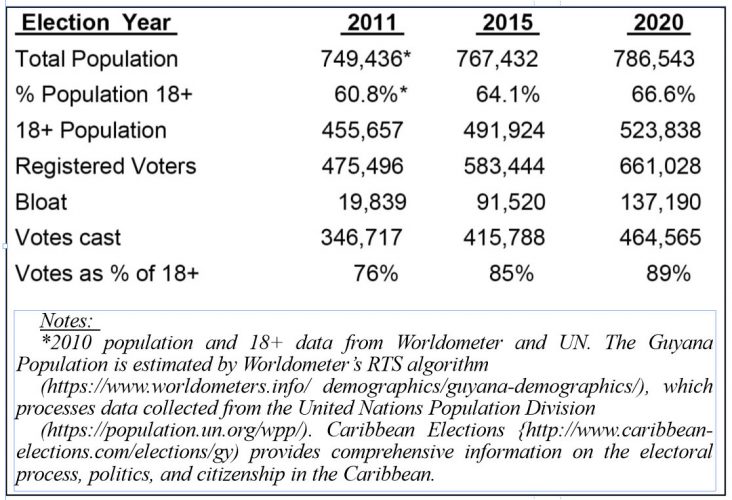 Current estimates by the UN shows Guyana has grown (from 749K to 786K = 36K) and aged (from 60.8% to 66.6% more in 18+) over the past 10 years. The estimates reflect more young people are moving into the voting age group, less working age citizens are migrating, and the elderly are living longer. These estimates are based on algorithms which factor in birth rates, death rates, migration, aging etc drawn from domestic census data such as that presented by Guyana’s Statistics Bureau (I could not find locally generated estimates). https://statisticsguyana.gov.gy/wp-content/uploads/2019/10/2012_ Census_Life_Table.pdf)

During this same period voter turnout increased (from 346K to 464K = 118K) substantially. This is not unreasonable given the heightened interest (76% to 89%) of the population, fuelled in part by social media and the increasingly more penetrative and pervasive electioneering of the two major parties. Given the generally perceived poor performances of the governments during this period it is no surprise that the three elections have been the most competitive (one seat majorities/minorities for the winner) in the history of Guyana’s elections.

The closeness of these elections are explained by the changing demographics in Guyana. As some writers have suggested, Guyana’s elections are dynamic because of the increased Mixed and Indigenous citizens, influx of youthful voters unburdened by loyalty or distrust, and older voters willing to give third (e.g. AFC) parties a voice in parliament. Voting dynamics were also influenced by internal migration. The regional population changes, according to Roopnarine (Guyana Population Movement and Social Development, 2012), are explained by both internal and external migration.

One cannot ignore the exponential growth in the electoral lists, i.e.” bloat”, which has seen registered voters exceeding the voting (18+) age population by as many as 137,190 in 2020. I am mindful that many considered “bloat” are living members of Guyana’s diaspora who have the right to be registered and to vote. So, there are obviously significant problems with the voters  list, not least of which are the inclusion of large numbers of dead and disinterested migrants.. GECOM, the body tasked to provide an appropriate OLE has not done so despite major activities over the past 10 years: three general elections, two local government elections, claims and objection periods and an aborted partial house-to-house registration. It is telling that both major parties had turns in office and their appointees occupied all seven seats in GECOM.

The OLE for the 2020 elections was discussed by the President and GECOM commissioners. The President said the government is satisfied that preparations are onstream for a timely elections process. (https://newsroom.gy/2019/12/27/president-satisfied-with-gecoms-preparations-for-elections/https://newsroom.gy/2019/12/27/president-satisfied-with-gecoms-preparations-for-elections/).

“I got the clear impression from the Chairman (retired Justice Claudette Singh) and all of the Commissioners that they were quite satisfied that the preparations for elections were onstream and that we can all look forward to having a credible and efficient election by the 2nd of March,”

Given the above, I am convinced all parties went into the 2020 election accepting the OLE and were well aware of the “bloat”. One imagines they would have all developed plans to deal with any negative exigencies. Statements from observers and almost all the contesting parties suggest that GECOM election day staff and processes effectively thwarted most of the efforts to use the OLE illegally. GECOM’s CEO invalidating votes on the basis of a bloated OLE without credible evidence stretches the limits of my comprehension.

No, it wasn't.
19 minutes ago
He likely went back to Guyana because he couldn't get in to law school in Canada.
23 minutes ago
The PPP is lucky that Granger did not misuse the power he had by virtue of that constitution. Burnham and that constitution would have...
25 minutes ago
I am not sure how much power Burnham Constitution give to politicians because the Coalition while in government lost every legal battle...
53 minutes ago

Special probe team will work free of charge
19 minutes ago

Now that PPP has won. Time to take a breather
1 hour ago