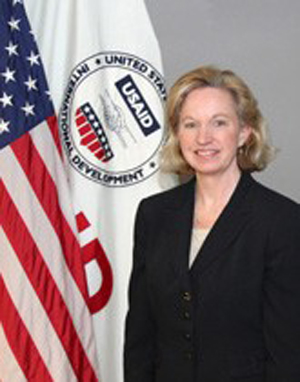 US Ambassador to Guyana, Sarah-Ann Lynch today issued a statement defending the input by her and US government officials on the need for a fair result from the March 2nd general elections here.

She also asserted that the United States is “entirely non-partisan about which party wins Guyana’s 2020 elections”,

U.S. Diplomats: Why We Champion Democracy

A common criticism of diplomatic statements during politically charged election cycles is that they amount to “foreign interference.”  But in foreign policy, the difference between meddling and practicing good diplomacy is that the latter involves sticking to bedrock principles of human rights, good governance, and transparency and, whenever possible, underscoring the values that bind the country you represent to the country in which you serve.  Quite properly, there has been a lot of attention by U.S. diplomats to Guyana’s 2020 election day and events after it.  In this context, silence breaks an oath I took.  In serious and soaring language, I swore to “bear true faith and allegiance” to the Constitution of the United States, and it is in that document where these bedrock principles stand solidly for me.  Indeed, 11 of the 27 amendments to the U.S. Constitution address voting rights, electoral issues, or matters of succession by our representatives.

The international extension of these principles is present in the Universal Declaration of Human Rights of 1948.  Article 21 underscores that, “Everyone has the right to take part in the government of his country, directly or through freely chosen representatives.”  It makes clear that the “will of the people shall be the basis of the authority of government.”  In our hemisphere, Article 3 of the Charter of The Organization of American States correctly observes that solidarity among the American States requires “the political organization of those States on the basis of the effective exercise of representative democracy.” The Guyanese Constitution also underscores democratic principles.

Guyana has displayed its leadership in defense of representative government recently by joining other Lima Group members from the Americas to strive for a democratic resolution to the crisis in Venezuela.   Along with 12 other countries, Guyana proclaimed in January 2019, “We reiterate that the electoral process that took place in Venezuela on May 20, 2018, lacked legitimacy as it neither included the participation of all political actors in Venezuela, nor did it have the presence of independent international observers, nor did it comply with the necessary guarantees or international standards for a free, fair and transparent election. Accordingly, we do not recognize the legitimacy of the new presidential term of Nicolas Maduro, or his regime, which commences on January 10, 2019.”  Such statements are not foreign interference, they amount to good diplomacy by members of the hemisphere’s democratic club.   My hope and expectation is that Guyana maintains its good standing as a member of this club by counting all the election day votes through a transparent and credible process.  Guyana is certainly not Venezuela; let’s keep it that way.

Some have criticized the U.S. Government for speaking out, suggesting we would do better to get our own house in order.  To that I respond, democracy, or rule by the people, is almost always noisy.  The democratic cacophony is home to our competing values and political identities in the public square.   At its heart, democracy is the expression of our freedom to be represented.  As such, each adult citizen must have one vote and each vote must have one value.

I will close by sharing an apparently well-kept secret: The United States Government is entirely non-partisan about which party wins Guyana’s 2020 elections.  The major parties – and the smaller ones too – all offer the opportunity to continue an excellent bilateral relationship based on a shared commitment to supporting improved governance, prosperity, and security in Guyana.  Let’s get on with that important work.

Let’s get on with that important work.    Count all the VOTES.

Would this be a prelude to the US navy ships deployed just off the shores of Guyana?

I don't think so.

Let’s get on with that important work.    Count all the VOTES.

Would this be a prelude to the US navy ships deployed just off the shores of Guyana?

The US navy ships are needed in South America. They might have to kill two or three birds with one stone.

Welcome to the Original Guyanese Discussion Forums, first established in 1996. Here you can discuss, ask questions or generally debate anything related to politics, movies, music, health or just gyaff away your day/night here. A note of warning, the Political forum is not for the faint of heart.  We do have some rules, so please adhere to them.
Privacy Statement - Rules
Join Now
Billy probably had high hopes on a cushy PPP job and retirement in the homeland but nothing materializing.
15 minutes ago

Brazil has never made any claim on our territorial integrity that I'm aware of. But I know u just digging kicks which is all well an...
17 minutes ago

In an old thread brought up recently, there was a Hairy Payra Testes. Payra is Indo milky chocolate.
33 minutes ago

The part that belongs to Venezuela or Brazil?
56 minutes ago
Indian and Chinese troops were engaged in aggressive posturing in the last 20 days.
1 hour ago
Hey hey hey...Harris expose de one lovers Benchshop, Ronan, and all dem wid he SUPER DAG
15 minutes ago

Guyana celebrates 54 years as an independent nation
17 minutes ago

Counting down to June 1
33 minutes ago

Is China preparing for an invasion of India?
1 hour ago