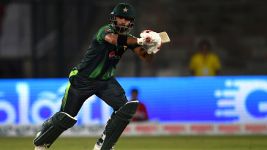 Pakistan have decided to bat in the second T20I against West Indies in Karachi. After putting on their joint-highest T20I total on Sunday night, captain Sarfraz Ahmed decided to set a total once more on what looked to be a similar pitch. Given the near-perfect performance in the first T20I, Pakistan were unsurprisingly unchanged.

West Indies were dealt a blow shortly before the toss when it emerged Veerasammy Permaul would miss the final two games. As such, the only change Jason Mohammed made was an enforced one, with a debut call-up for 21-year old Odean Smith. Defeat in this game for West Indies would see Pakistan win the series with one game to go, also to be played at the National Stadium in Karachi.

Welcome to the Original Guyanese Discussion Forums, first established in 1996. Here you can discuss, ask questions or generally debate anything related to politics, movies, music, health or just gyaff away your day/night here. A note of warning, the Political forum is not for the faint of heart.  We do have some rules, so please adhere to them.
Join Now
Fixed, single roaming rate for CARICOM nationals soon –Mottley
Private sector `gravely concerned’ about abrupt changes in polling places - -calls on GECOM to reverse decision
Soured relationship seen behind murder of Trinidad accountant
Keiler wins Courts Mashramani 50-miler in B/ce
Bent Street routs Rio All Stars 5-1 - —triumphs in Magnum Mash Cup Futsal final
Guyanese umpire Banwarie to make first-class debut
Guyanese women’s team selected for World Teams TT C/ship in S/Korea
Late changes made to list of polling places - -opposition-appointed commissioners
Current Visitors: 214 (14 members, 200 guests)
old petiole do not have "long" time and should bail.
44 seconds ago

Our property taxes fund Catholic and Public schools in Canada and University is much more affordable compared to the USA. We are...
17 minutes ago

A thousand points is just 3.50%. Don't worry and invest for the long-term. We cannot predict the market in the short term but certainly...
23 minutes ago

I was pretty much non committed to any of the Democratic candidates until Bernie spoke about Castro. He has my vote now. It's a lesson...
29 minutes ago

That honour goes to Prashad.
36 minutes ago

Dow might take a thousand points hit today
45 seconds ago

Ray Please listen to Brother Anand Speak
17 minutes ago
Bernie don't know how much it cost, but he thinks he knows who will pay
29 minutes ago

Zara has been suspended
36 minutes ago