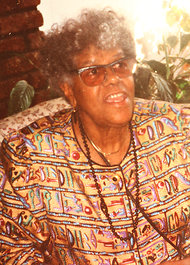 In the 1980s and ’90s, the New York City Department of Sanitation gave Una Mulzac as many as 50 summonses — she did not count them because she had no intention of paying them — for refusing to sweep 18 inches into the street in front of her bookstore.

“There’s nothing wrong with being a street sweeper,” she told The New York Amsterdam News in 1995. “It’s simply not the profession I have chosen.”

Ms. Mulzac’s profession was selling books at Liberation Bookstore, a Harlem landmark that for four decades specialized in materials promoting black identity and black power. On one side of the front door, a sign declared, “If you don’t know, learn.” On the other: “If you know, teach.”

She was convinced that the city’s purpose in asking her to sweep a strip of Malcolm X Boulevard was nothing less than “to control every aspect of the black struggle.”

The store, at West 131st Street, was Ms. Mulzac’s weapon in a lifetime of struggle — always leftist and often cantankerous — that ended on Jan. 21 at a hospital in Queens. Her second cousin Henry Mulzac said she had died there of natural causes. She was 88.

Ms. Mulzac’s driving ambition was to emulate her father, Hugh N. Mulzac, the first black person to command a ship in the United States merchant marine and a socialist whose political beliefs were investigated in 1960 by the House Committee on Un-American Activities. She went to Guyana to fight for revolution in the early ’60s and was severely injured by a bomb.

Ms. Mulzac started Liberation Bookstore in part to promote causes like fighting South African apartheid. She seldom left the store during business hours except to protest war, racism and police brutality. Occasionally, she was arrested.

“There are some people who pick and choose their battles,” Leticia Mulzac, another second cousin, said. “With her, every battle was her battle.”

Her bookstore, born at a time when Harlem was ravaged by crime and heroin, became a neighborhood landmark like the Apollo or Sylvia’s restaurant and endured into the era of Starbucks and Old Navy. People came from all over Harlem and beyond to buy books there, whether by well-known authors like James Baldwin and Toni Morrison or by little-known conspiracy theorists.

The store harked back to an earlier generation of politicized Harlem bookstores, particularly Lewis H. Michaux’s African National Memorial Bookstore, a mainstay on West 125th Street for 42 years, until 1974. Mr. Michaux proudly advertised it as the “House of Common Sense and the Home of Proper Propaganda.”

“Anyone interested in race has to come here,” he said in 1961. (Lewis’s brother, Oscar, is regarded as the first major African-American feature filmmaker.)

Apart from the outdoor book vendors on 125th Street, Ms. Mulzac’s store became the literary destination in Harlem for a later generation of people “interested in race.” Shariff Simmons, a musician and poet, once called it U.C.L.A., for University on the Corner of Lenox Avenue. (Lenox Avenue is also known as Malcolm X Boulevard.)

As both Ms. Mulzac’s health and the condition of her store deteriorated, she worked less and less, and the store ground to a halt around 2007. Her family donated its complete stock to Hue-Man, now Harlem’s principal bookstore, on Frederick Douglass Boulevard.

Both bookstores and others like it have been living rebuttals of false preconceptions about Harlem. “No one else thought a community like ours needs a bookstore,” said Marva Allen, Hue-Man’s chief executive. “The unfortunate thing is that we just keep coming one by one, instead of expanding.”

Una Mulzac was born on April 19, 1923, in Baltimore and moved to the Bedford-Stuyvesant section of Brooklyn as a little girl. She graduated from Girls High School, where she ran track, and got a secretarial job at Random House, where she became interested in publishing. She moved to Guyana, then known as British Guiana, around 1963 to start a bookstore and to work for the party of Cheddi Jagan, a revolutionary Marxist.

One day a package arrived at the bookstore and exploded when a colleague opened it, killing him. Ms. Mulzac was protected by a metal barrel but still suffered wounds to an eye and her chest. She went to the United States for treatment, then returned to Guyana.

“I had gone down there to help the revolutionary mission of the people,” she told The Amsterdam News in 2002, “and I was determined to complete it.”

She did not, however. Discouraged by the conservative government that came to power after Guyana gained independence from Britain in 1966, she returned to Harlem, deciding to pursue revolution by other means. She opened her bookstore in 1967. Soon books were piled atop revolutionary pamphlets amid posters of black political heroes.

In an interview for a 2011 book, “Harlem Is Nowhere: A Journey to the Mecca of Black America,” by Sharifa Rhodes-Pitts, Ms. Mulzac said friends had tried to discourage her from naming it “Liberation,” warning that it would invite trouble. They suggested just Bookstore.

Rents were initially low in Harlem, and when they rose in later years, Ms. Mulzac fought with her landlord. Demonstrators rallying to her cause, some led by the Rev. Al Sharpton, added fire to her protests.

Ms. Mulzac, who never married and left no immediate survivors, saw herself as an educator. She was secretary of a group formed to demand better education for blacks. She ran an advertisement in Black News asking, “Have you ever read ‘The Autobiography of Malcolm X’ for the second time?”

Her cousin Leticia said she was so feisty, she was evicted from two nursing homes. Leticia recalled her railing against keep-off-the-grass signs while strolling in Central Park and blaming Mayor Rudolph W. Giuliani, barking, “That Giuliani’s a fascist!”

Ms. Mulzac did have a sweeter side. The Los Angeles Times once told of an episode in which an 18-year-old wandered into her store and wanted to know if he looked like Malcolm X, as his uncle had suggested. “He was thrilled when I told him he did,” she said with a smile.

The Progressive Book Shop is housed at the bottom flat of a three storeyed building known as “Freedom House” at Lot 41 Robb St., Georgetown. The building is owned by the People’s Progressive Party.

On the 17th July, 1964, at about 10.45 a.m. Michael Forde, deceased, Una Mulsac, Patricia Christian, Mary Nunes and Hilda Gouveia were in the book shop. At that time a man of African descent entered the book shop with a parcel. He inquired about books and was shown a book entitled “New Cuba” by Hilda Gouveia who asked him to buy it. He did so by paying her with a dollar note. The book cost 5 cents. Hilda Gouveia handed the money to the deceased, Michael Frode, who was then the cashier. She was given 95 cents to give the purchaser of the book but the man had left the shop leaving a parcel behind which he had taken there.

Hilda Gouveia drew Michael Forde’s attention to the parcel and she went out of the shop advertising books on the pavement. Michael Forde reported to Una Mulsac what happened and Mulsac told him to take the parcel outside. He took the parcel outside followed by Mary Nunes and Patricia Christian. While he was outside the building on the eastern side, he attempted to open the parcel which exploded killing him instantly and injuring the following persons who were on the premises: —

Mrs. Janet Jagan and some other persons who were in the centre floor were unhurt. Freedom House was extensively damaged and a building immediately east of it was demolished.

NehruBig Mouth Member
That Bomb had to be done by the MI5 or the CIA!!

The CIA did not plant the bomb, even though they were financing the PNC and others.

The CIA did not plant the bomb, even though they were financing the PNC and others.

Sign In To Reply
Post
Current Visitors: 215 (3 members, 212 guests)
Welcome to the Original Guyanese Discussion Forums, first established in 1996. Here you can discuss, ask questions or generally debate anything related to politics, movies, music, health or just gyaff away your day/night here. A note of warning, the Political forum is not for the faint of heart.  We do have some rules, so please adhere to them .
Do not post any messages that are obscene, vulgar, sexually-orientated, racist, hateful, threatening, or that otherwise violate any laws. Do not post any messages that harass, insult (name calling), belittle, threaten or mock other members.  Personal attacks are not permitted. Do not use sweeping generalizations and plural pronouns to cloak personal attacks. For example if a poster(s) states that he thinks 'x' is a good idea, replying that "Anyone who supports 'x' is an idiot" is a personal attack.