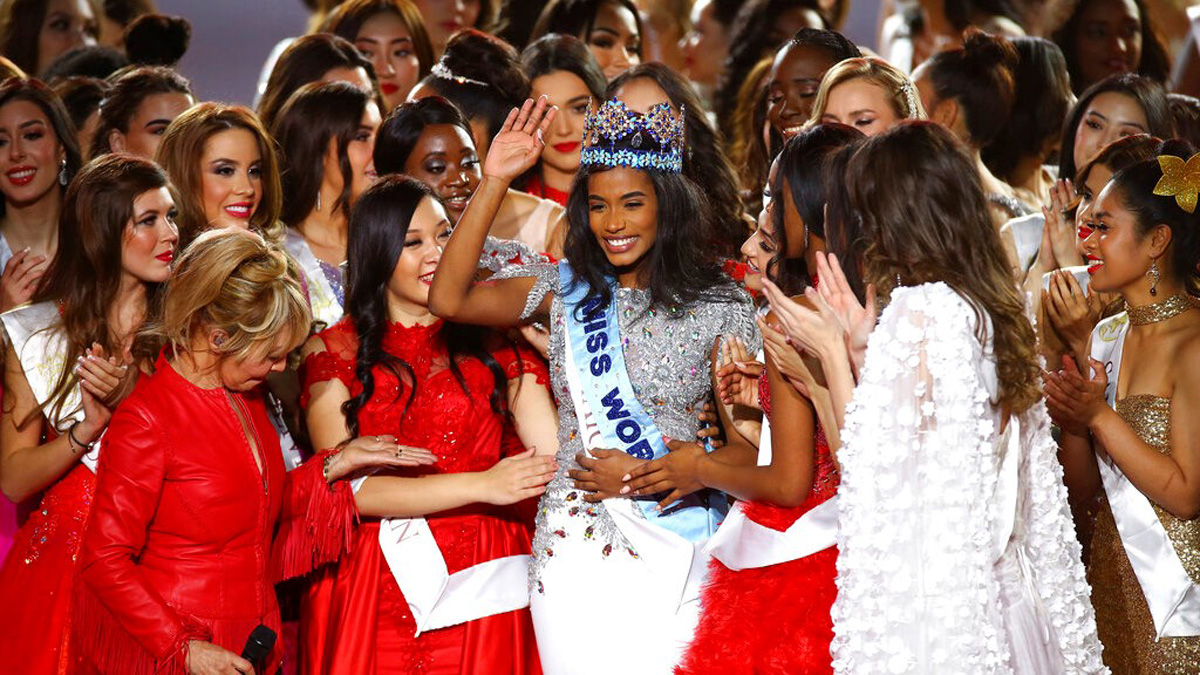 Miss World 2019 Toni-Ann Singh of Jamaica is congratulated by other contestants after winning the award during the 69th annual Miss World competition at the Excel centre in London, England, yesterday.

(Jamaica Gleaner) Jamaicans in the United Kingdom have welcomed with delight the crowning of Toni-Ann Singh as Miss World 2019, the fourth Jamaican to snatch the coveted title in the world’s longest-running beauty pageant.

The 23-year-old won the title on Saturday night at the London ExCeL arena in the Docklands, and in doing so, became the third Jamaican to win in London after Carole Joan Crawford in 1963 and Cindy Breakspeare in 1976. Lisa Hanna, the other Jamaican to win the crown, did so in 1993 in Sun City, South Africa.

“We are extremely elated about this inspiring and well-deserved victory. The entire Jamaica, as well as Jamaicans in the UK and friends of Jamaica all across the world, are proudly celebrating with her.

“Toni-Ann is already an ambassador for Brand Jamaica. With her new title of Miss World, she will not only further promote Jamaica on the world stage, but will continue to inspire young women across the world,” Ramocan added.

Another person who was excited about Toni-Ann’s win was June Daley, founder of the Miss Jamaica UK beauty pageant and who acted as Toni-Ann’s chaperone when she arrived in London in November before she linked up with the rest of the Miss World contestants, was also ecstatic about the accomplishment.

“I was first contacted by Dahlia Harris, the co-franchise holder of the Miss Jamaica World, and she asked me to meet Toni-Ann when she arrived from Jamaica,” said Daley, who was in the audience on Saturday.

“From the moment I met her, she had that magical touch, and I had a hunch she was going to win. … You could see that she was a people’s person, very down to earth and at the same time very intelligent and articulate. When she was in camp with the other contestants, I used to call her every morning, giving her inspiration, keeping positive, and telling her to focus on the winning.”

As news filtered through that Singh had won the title on Saturday, social media caught fire, and one of the highlights was the glee of Miss Nigeria, Nyekachi Douglas, who was in the top five, who jumped for joy and embraced Singh after she was named the winner.

The new Miss World has already started to feature in the UK media circuit by appearing on the popular ‘Good Morning Britain’ TV show on Monday, where she was reunited with Piers Morgan, who had interviewed her on Saturday night.

Dr Beverly Lindsay, chairman of the Association of Jamaican Nationals in Birmingham, also had high praise for Singh, who wooed the crowd with her rendition of the Whitney Huston song I Have Nothing.

Lindsay said: “Jamaica is a small country, but once again, we are punching above our size and making our presence felt on the world stage. We are blessed with talent and beauty.”

Also echoing her praises was Sylbourne Sydial, lawyer and host of a popular online TV show. He said: “Again with the achievement of Toni-Ann Singh as Miss World 2019, Jamaica is yet again showing its dominance on the world stage in every area. All Jamaicans are proud of her, and I wish Toni-Ann all the success.”

So an Indian girl from Jamaica won the title.

So an Indian girl from Jamaica won the title.

Nah, me thinks she Chinee!!

Her father is Indian and her mother is a dougla.

The family immigrated to the United States when Singh was aged nine, settling in Florida.[2] She attended Florida State University in Tallahassee, Florida, where she graduated with a degree in women's studiesand psychology.[3]

Miss World 2019 is a bit private when it comes to her personal life. She has not revealed much on her siblings if she has any.

This girl is a beauty.

Prashad replied:
I got a kitchen garden but my wife don't want me to touch it. She took it all over. She behaves like the gold miner.