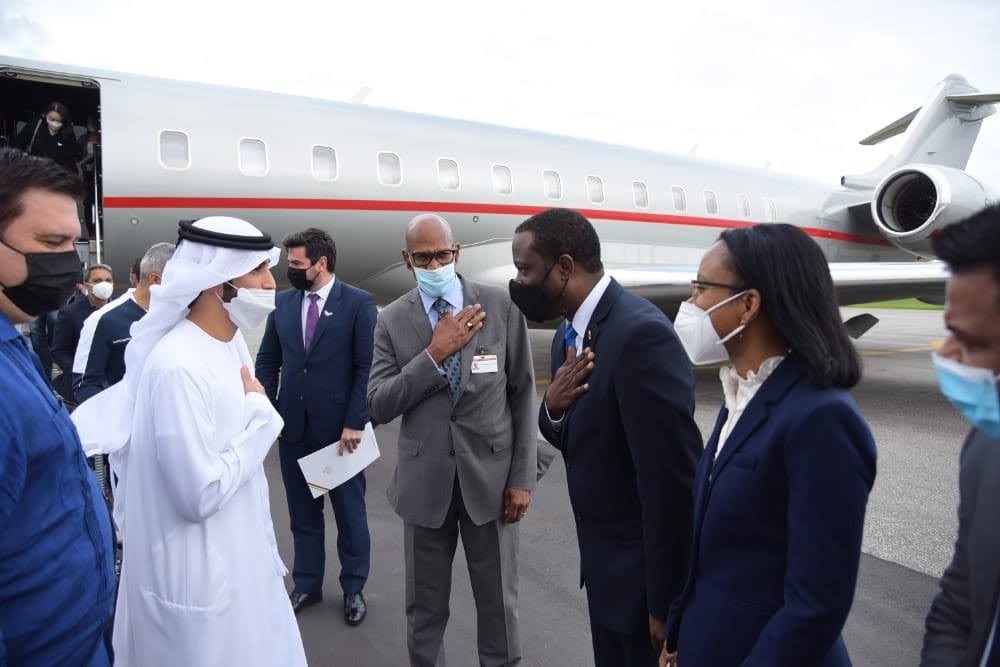 A release from the Office of the President said that over the next few days, the Sheikh, who is a member of the ruling family in the UAE, and members of his team will meet with several Government officials from various ministries.

In the initial meeting with President Ali, the UAE team also met with members of the cabinet including: Minister of Foreign Affairs and International Cooperation, Hugh Todd; Minister of Natural Resources,  Vickram Bharrat; Minister of Housing and Water and Minister within the ministry, Collin Croal and Susan Rodrigues; Minister of Agriculture,  Zulfikar Mustapha; Minister of Public Works, Juan Edghill and other government officials.

The UAE is one of the top oil producing countries globally and is expected to lend assistance to Guyana in oil and gas, among other areas, the release said.

“We currently own the largest emergency power plant installed in West Africa. The Private Office is undergoing development of over c. 2000 MW of Power Plants across many countries in Africa, Asia and other jurisdiction in the developing regions. We also deliver integrated and unbundled solutions in supplying LNG. With the help of our partnerships, we carry out the business of the complete supply chain of LNG and supplying natural gas,” it adds.

This one highlights the arrival of the UAE Delegation.

This one highlights the arrival of the UAE Delegation.

OK! If you want it that way.

Sign In To Reply
Post
Current Visitors: 155 (5 members, 150 guests)
Welcome to the Original Guyanese Discussion Forums, first established in 1996. Here you can discuss, ask questions or generally debate anything related to politics, movies, music, health or just gyaff away your day/night here. A note of warning, the Political forum is not for the faint of heart.  We do have some rules, so please adhere to them .
Do not post any messages that are obscene, vulgar, sexually-orientated, racist, hateful, threatening, or that otherwise violate any laws. Do not post any messages that harass, insult (name calling), belittle, threaten or mock other members.

Join Now
cain replied:
Oiiii Sheiksta how you doin banna? It seems as though you've been hiding from Covid and can't even get into GNI unless you wear a mask.

Ramakant-P replied:
Cain, you are missing the point. It's a normal procedure for the police to take such an action. It's not about trust. If you eliminate...
cain replied:
Seems as though Marky got his bamsy slapped with the broadside of a cutlass. Relatives ripping off their own, sometimes having them...

Ramakant-P replied:
Anybody who keeps $5 million in his house is looking for trouble. That is not something you advertised. Therefore, you have to look at...
Sheik101 replied:
It's not imaginary at all, uncle Rama. Guyana has been lucky and dodging the bullet aka the mighty Atlantic for quiet some time now. God...

Politics and development
3 hours ago