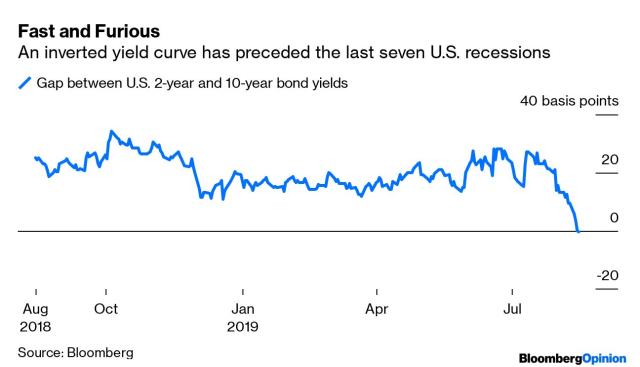 (Bloomberg Opinion) -- It only took a small taste of what a U.S. recession might be like for President Donald Trump to suggest that he wants a trade deal with China after all.

The Dow Jones Industrial Average plunged 800 points in its worst rout of the year after the gap between the two-year and 10-year Treasury yields turned negative for the first time since 2007. An inverted yield curve has preceded the last seven recessions in the U.S.

Ever sensitive to stock movements, the president tried to calm the markets after the close. Abandoning his hawkish trade rhetoric, Trump extended an olive branch to Chinese President Xi Jinping in a series of tweets, calling him a “great leader” and a “good man.” He ended his posts with “Personal meeting?,” without specifying whether he was proposing a summit.

The question is how Xi will respond to Trump’s overture. Who’s more desperate for a trade deal right now?

Consider where China and the U.S. are in their respective business cycles. Since the trade war started, American consumers have sat tight and enjoyed their prosperity – just as Trump has boasted. China’s economy, by contrast, has been having a much tougher time. In the past year and a half, Beijing has had to deal with all sorts of credit issues that could escalate into a wider economic crisis.

Examples abound. Last year, regulators changed margin-financing rules as the stock market suffered one of the world’s worst routs. The declines stemmed partly from listed companies pledging shares as collateral to secure short-term bank financing. This spring, the People’s Bank of China undertook the  first commercial bank seizure in two decades and was forced to calm ensuing jitters in the interbank market. Meanwhile, Beijing has had to deal with periodic peer-to-peer lending crises and bond defaults by state-affiliated entities.

That might sound bad, but it helps China now. If a fireman has to put out fires every day for a year, he gets more proficient. That’s where Beijing is now.

The same can’t be said of the U.S.. The slide in its sovereign long-term bond yields – a measure of investor confidence – has been fast and furious. Just two weeks ago, when Federal Reverse Chairman Jerome Powell described the U.S. rate cut as a “ mid-cycle adjustment,” the gap between the 2-year and 10-year bond yields was still 21 basis points. On Thursday morning in Asia, the 30-year yield, which more reflects traders’ view of the overall health of the economy rather than the depth of the current easing cycle, fell to a record low below 2%.

To be sure, China’s economy is slowing: Industrial output growth is at its weakest since 2002. But digging deep into the data, the picture that emerges is of a government that’s measured and confident. For instance, some of the weakness in the July data reflected moves to rein in shadow financing and restart property deleveraging. If Beijing wants better-looking industrial output numbers, it just needs to reopen the liquidity taps – as we saw in the first quarter.

On Thursday, the PBOC was showing no signs of panic. The central bank rolled over 383 billion yuan ($54 billion) of medium-term facility loans with interest rates unchanged. While the world's largest central banks are racing toward zero rates, the PBOC has been sitting on the sidelines, saving its firepower for later.

China’s system has its advantages when it comes to economic management, as I’ve written. The ability of ministries to co-ordinate their policy responses means China can practice the ultimate in modern monetary theory, which is probably what the U.S. needs right now to restore its yield curve.

So while Trump may think his olive branch is a big deal, the message to Washington is: Don’t think you’ve got China on the ropes. Xi was panicking a year ago; he can afford to wait now.

Even as 10 year T notes are a mere 1.6% he screams that high interest rates are "killing the economy".  Everyone, even his rich buddies, blame his wanton use of tariffs with even Canada having suffered from this.

Xi looks and laughs and knows that DC will be his just as HK is, if Trump remains in office.

Trump in the meantime pines because he hasn't received a love note from Lil Kim in such a while.  Lil Kim said that firing rockets is more fun.

Trump in the meantime wonders whether he can do to NYC what he thinks that Xi is about to do to HK.

Welcome to the Original Guyanese Discussion Forums, first established in 1996. Here you can discuss, ask questions or generally debate anything related to politics, movies, music, health or just gyaff away your day/night here. A note of warning, the Political forum is not for the faint of heart.  We do have some rules, so please adhere to them.
Join Now
Trinidad: Police seek help in solving teacher’s murder
Trinidad: Stalker who murdered wife should have been arrested earlier – women’s group
Guyana makes gains in aviation compliance - -groundwork laid for US Category 1 status
Final voters list to be certified today
Guyana ready for coronavirus - -risk of infection low, authorities say
Young Windies primed, ready for NZ challenge - ICC U19 World Cup….
Accused in teen miner’s murder freed due to lack of evidence - -after almost 10 years in jail
Two more charged over murder of `paper vendor
Current Visitors: 291 (10 members, 281 guests)

PNC supporters don’t care. So you have to take a stand. This is why the phantoms were brought in.
3 minutes ago

DOGS WILL BE DOGS AND THERE FOR THE WORLD TO SEE!!!!
5 minutes ago

Mr. Moderator: Can you please change the heading of this thread. Residents NOT Residence. Thank You
8 minutes ago

THOSE SCUMBAGS WILL NEVER CHANGE AND WILL FOREVER DISGRACE GUYANA, CERTIFY GUYANA AS THE SHIT HOLE IT IS. MEH NEIGHBA ALWAYS SAID YUH...
9 minutes ago

wAS THINKING ABOUT kOBE
7 minutes ago

CORONA has the potential of becoming a pandemic
56 minutes ago
Youth confesses to murdering No. 63 Beach hotelier, workman – police sources
1 hour ago