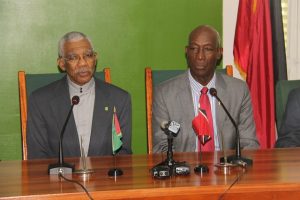 President David Granger and Prime Minister of Trinidad and Tobago, Keith Rowley briefing the media shortly after signing a memorandum of understanding on energy cooperation.

Trinidad and Tobago’s Prime Minister, Dr. Keith Rowley is very disappointed and very concerned about the political situation in Guyana, saying that political instability in the headquarters country of the 15-nation Caribbean Community (CARICOM) would not be good.

Rowley shied away from giving his position on what would be CARICOM’s position if David Granger is sworn in again under a cloud of electoral irregularity.

But he suggests that with the CARICOM headquarters is in Guyana, that will be an awkward position for the regional integration movement. “You must remember that the headquarters of CARICOM is situated in Georgetown so all of this is cause for concern so we can’t accept a situation where in the headquarters country what is being threatened comes to pass.

We cannot countenance that and that is why I am hoping that we come to a speedy conclusion to this and that a decision is made which the Guyanese people can be comfortable with going forward,” Rowley told CCN TV6’s Elizabeth Williams in an interview.

More than 30 years ago, then Dominica Prime Minister Eugenia Charles had been advocating for the removal of the CARICOM headquarters during the period of the Forbes Burnham-led dictatorship of the People’s National Congress (PNC).

With the elections now in court one month after Guyanese voted on March 2, he does not believe that the political situation will end nicely.

Mr. Rowley is also unsure what further role the Caribbean Community (CARICOM can play, having already arranged and dispatched  a high-level team of scrutineers to supervise the recount.

However that team did not get down to work because an incumbent APNU+AFC candidate, Ulita Moore, had asked for a judicial review of the Guyana Elections Commission’s (GECOM) decision to conduct a national recount.

The Guyana Court of Appeal will Sunday morning give its decision on whether the High Court can conduct a judicial review of GECOM’s recount decision.

GECOM on Friday reconfirmed its decision to conduct the recount but is yet to finalise arrangements for doing so.

GECOM is all talk and no action.

The High court seemed to be lost despite all the so called brilliant liars, sorry lawyers, they pretend to be.

In 1968, the Caribbean Leaders helped Burnham rigged the election and created the culture the PNC is practising today.

Who is the brown girl, Rihanna?

The brown girl who leads.

Caricom is not vocal enough on the issue of electoral fraud by the Granger led government in Guyana.  They ought to do more to convince me that they are very serious about keeping Guyana on the democratic path. Caricom had one member state that was dictatorship and that was Guyana under L.F.S. Burnham and Desmond H. Hoyte.  This must not be allowed to happen again.  Caricom must never allow and dictatorial government to be a member of Caricom.

Sir Gilbakka, Prashad wants an independent sovereign country for his people he has no time  to worry about an anti-koolie racist failed shithole Mugabe Republic.

Caricom should move its headquarters from Guyana. There is too much political and economic instability in the country which could be a hindrance to the progress of the organization. The building is beautiful. They can convert it into a Dharam Sala or a home for battered women.

But it feels good.

Your behind is safe by a Canadian pond. All you have to worry about is that Canadian neck. We are dealing in Guyana here with a people who are on a razor's edge of a Rwandan style genocide.

Sign In To Reply
Post
Current Visitors: 87 (2 members, 85 guests)
Welcome to the Original Guyanese Discussion Forums, first established in 1996. Here you can discuss, ask questions or generally debate anything related to politics, movies, music, health or just gyaff away your day/night here. A note of warning, the Political forum is not for the faint of heart.  We do have some rules, so please adhere to them .
Do not post any messages that are obscene, vulgar, sexually-orientated, racist, hateful, threatening, or that otherwise violate any laws. Do not post any messages that harass, insult (name calling), belittle, threaten or mock other members.

seignet replied:
Nawabs, Modi will deal wid dem.
CJ throws out one election petition, the other to proceed
1 hour ago

Biden plans to roll back a lengthy list of Trump policies. Here’s what may happen
7 hours ago