The Guyana Chapter of the Extractive Industries Transparency (GYEITI) is unaware of a special account that was prepared for the receipt of payments from Esso Exploration and Production Guyana Limited (Ltd) and its joint venture partners for the rental charges for the Stabroek Block. 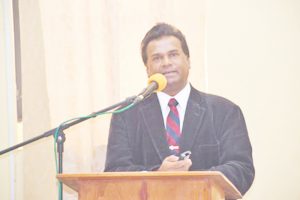 This was confirmed in an invited comment by Dr. Rudy Jadoopat, GYEITI’s Executive Director. Dr. Jadoopat said that the body is worried about the state of affairs and has in fact recommended to the authorities that the reporting structure for entities such as ExxonMobil Guyana has to be changed.
Dr. Jadoopat was asked to weigh in on the fact that a special account had been created by the administration for the payment of rental fees.
He said while the body is aware of payments generally made by the oil major to the Guyana government, the manner in which the information is received leaves much to be desired.
It was pointed out figures are not disaggregated.
As such, GYEITI is unable to say what payments are made in relation to what or where it went. In fact, Dr. Jadoopat was at the time of the interview unaware that Exxon’s rental fees were being paid to a special account.
He said, “This is information that has to be in the public, so that the public can be able to publicly discuss how to spend public resources.”
Under the PSA inked with CGX Energy Inc, an oil operator in Guyana in February 2013, that company would pay to the regulating body—the Guyana Geology and Mines Commission (GGMC)—an annual rental of US$100,000 for its contract area.
Ratio Energy Ltd which inked its PSA with Government in April 2015, also agreed to pay a rental fee of US$200,000 annually for its contract area.
That rental is being paid, according to the PSA, to the GGMC. The same obtains for Tullow and Eco Atlantic, a joint venture.
That Joint Venture inked a PSA on January 14, 2016, and agreed to pay US$40,000 annually for its contract area.
ExxonMobil Guyana—EEPGL and its partners Hess Corporation and CNOOC—was charged a higher rental of US$1M for its contract area which runs the length of Guyana’s coast with the Atlantic Ocean—bordered by Venezuela to the West and Suriname to the East.
That PSA however, dictates that the payment be made directly into accounts controlled by the Government of Guyana, and that the “Contractor (ExxonMobil Guyana) shall verify such bank accounts and the Minister agrees to cooperate, assist and provide the Contractor with any information it requires to conduct such verification.”
The definitions in Article I of the PSA defines Government as the “government and its ministries and agencies.”
Each of the other PSAs identifies GGMC as the body to conduct verifications or provide account information.
Then Minister with responsibility for the Energy Sector, Raphael Trotman, in an invited comment had said the reason for the change in arrangements had to do with the fact that it was a new regime in the way business was being conducted.
GGMC Commissioner, Newell Dennison, told Kaieteur News that rentals from all of the oil companies are indeed paid to the GGMC.
He told Kaieteur News that GGMC in its expenditure of its resources does not differentiate between its sources of income but rather all revenue streams are accounted for and consolidated.
As such, he could not say what, if any, specific programmes were funded using the revenues earned from its offshore rental.
The payment by the ExxonMobil and other oil companies with concessions in Guyana’s Exclusive Economic Zone (EEZ) is money paid to Guyana separate from royalty and profit oil to be earned from its offshore operations.
Companies are also required to pay to the Ministry an annual amount to be used for Corporate Social Projects (CSP) payments.
Government is yet to say what this has been earmarked for specifically.
ExxonMobil in its PSA had also committed to providing the Ministry of the Presidency (MotP) with US$300,000 each calendar year, for the Department of Energy (DoE).
Department of Energy Director, Dr. Mark Bynoe, had confirmed the existence of the money and payments made and that it was still to be utilized.
Under Article 28 of the PSA which deals with Social Responsibility and Protection of the Environment, “The Contactor shall directly fund” the amount of US$300,000 per calendar year with any funded but unspent portion of the amount being carried over to ensuing years.
Article 28.7 of the PSA stipulates that the Minister and the contractor shall meet annually to agree which projects shall be funded in a year.
Asked to provide an update on the state of the account, the Energy Department Head said he would be unable to, since this was an account set up by the Ministry.

Welcome to the Original Guyanese Discussion Forums, first established in 1996. Here you can discuss, ask questions or generally debate anything related to politics, movies, music, health or just gyaff away your day/night here. A note of warning, the Political forum is not for the faint of heart.  We do have some rules, so please adhere to them.
Join Now
Fire damages part of GPHC Psychiatric Ward
Trinidad: Police seek help in solving teacher’s murder
Trinidad: Stalker who murdered wife should have been arrested earlier – women’s group
Guyana makes gains in aviation compliance - -groundwork laid for US Category 1 status
Final voters list to be certified today
Guyana ready for coronavirus - -risk of infection low, authorities say
Young Windies primed, ready for NZ challenge - ICC U19 World Cup….
Accused in teen miner’s murder freed due to lack of evidence - -after almost 10 years in jail
Current Visitors: 72 (12 members, 60 guests)

I read something that the origins might still be bats 🦇 but spread to other animals. Corona is related to the SARS virus. I will...
3 minutes ago

Where did you get that from ? read the documents on the links posted , show where US said anything about Guyana to date at the UPR session.
6 minutes ago

America is hedging on a PPP victory. This is ominous for the PNC. I still remember that comment Somar made to me at my niece’s wedding.
10 minutes ago

The Chinese haven’t learnt since the SARS outbreak. They were eating bats and caused the outbreak. Now it’s snakes. Common sense is not...
11 minutes ago

CORONA has the potential of becoming a pandemic
3 minutes ago
U.S. expresses concern about misapplication of Guyanese constitution, court rulings
6 minutes ago