It is the view of Opposition Leader, Bharrat Jagdeo, that news of an 86 percent economic growth for Guyana after the first year of oil production is not painting the whole picture for the Guyanese public. 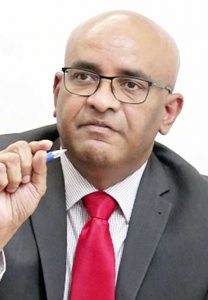 During a press conference at his Church Street office yesterday, Jagdeo said, “I’ve seen another set of so-called positive news which says the gross domestic product (GDP) of Guyana will increase by 86 percent next year and within, say five years, we can triple the size of our economy… That sounds really good… [But] does it mean it’s all great news for Guyana?”
The International Monetary Fund (IMF) released a report months ago, after its Article IV consultation here in Guyana, speaking of significant projected growth in Guyana’s economy when the oil starts pumping.
But it was only a week ago that Bloomberg reported on this matter, and certain local publications ran with it. What those reports failed to shed light on is a caveat in the IMF’s report: that most of the revenue accrued from Guyana’s oil-rich Stabroek Block, specifically for Liza-1 and Liza-2, will not directly impact this nation’s domestic economy.
In its report, the IMF stated that the gross total oil revenue, as a percentage of Guyana’s 2018 GDP, is calculated to be 1,178 percent. Of that, 1,007 percent is projected to go to the private oil companies, 171 percent is projected to go to the Natural Resource Fund and to the budget.
That means a total of 86 percent of the total value of the reserves of Liza-1 and Liza-2 will go to the oil companies, while Guyana will get only 14 percent.
The IMF noted that, though the oil sector’s output will raise the overall GDP and exports substantially, the direct impact it will have on the domestic economy will not be as pronounced, since the demand for importation of oil extraction equipment and payments to the operators will significantly offset Guyana’s profits.

Jagdeo said, like this caveat, there is a misconception that a significant spike in the GDP will have a direct correlation with the revenue going to the treasury.
Furthermore, the former President said that economic growth without significant direct job creation is likely, as the oil and gas sector is one that is not labour intensive, just capital intensive.
Project reports for the Stabroek Block make this pellucid.
Fewer than 200 persons would be working on each Floating Production Storage and Offloading (FPSO) vessel during oil production stage, and less than half of that work force would be Guyanese.
The Liza Phase One Project for example, will be using an oil storage vessel called Liza Destiny. It is designed to produce 100,000 to 120,000 barrels of oil per day. According to Exxon’s project plan, Liza Phase One is expected to employ about 140 persons during production operations.
The Energy Department Head, Dr. Mark Bynoe, recently said that 25 Guyanese are being trained to be part of that workforce.
As for Liza Phase Two, the project plan notes that the oil storage vessel called Liza Unity will be designed to produce 220,000 barrels of oil per day. Significantly, it will utilise fewer than 200 personnel during the production operations phase.
As for the third Stabroek Block project called Payara, an FPSO called Prosperity is expected to employ up to about 140 persons during production.
On top of that, Jagdeo said that some of the revenue that is coming to Guyana will go toward paying taxes for ExxonMobil and its partners, CNOOC Petroleum Guyana Limited and Hess Guyana Exploration Limited.
Recently, the Chief Financial Officer (CFO) for Hess, John Rielly, boasted to shareholders during an earnings call, about the cash that will flow to the company, since Guyana will be paying the oil companies’ taxes for them. This, Jagdeo called insensitive.
“A lot of people, they’re talking up the numbers [about] the growth in economy,” Jagdeo said, “without talking up what will come to us … in the treasury.”
He is of the view that the conversation about Guyana’s growth should focus more on what goes directly to the people.

GNI Warrier is a black guy who continue to build houses for Indians in Guyana. Its too bad he don't tell us about his projects, after...
16 seconds ago

Is this birthday party ends with the guest of honor MIA? I never get a surprise birthday party on GNI if Nehru doesn't make the effort.
4 minutes ago

I wrote a long piece challenging you to come to Guyana and see for yourself. But I deleted it and decided to watch a movie instead.
10 minutes ago

Did they receive the court summons?
12 minutes ago

GuySuCo needs additional $1.6b up to end of year to stay afloat -Agri Minister
10 minutes ago

Harmon terminated as Director-General of MotP; earned $900,000 per month plus benefits
12 minutes ago