A key report of the Inter-American Development Bank (IDB) has pointed to severe weaknesses in Guyana’s system to plan and implement projects. 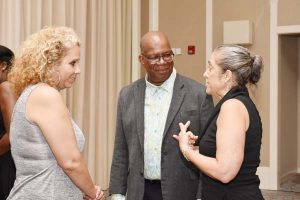 According to the document, the ‘IDB Group Country Strategy with the Cooperative Republic of Guyana 2017–2021’, slow and often stalled disbursements were symptomatic of Guyana’s challenging institutional environment and the lack of strategic planning and vision at the highest level.
The document, prepared under the leadership of Country Manager, Sophie Makonnen, and other support staffers, noted that the problems resulted in inefficient planning across the project cycle, from design and financing to implementation and monitoring.
The report, dated in August, would come after a recent high-ranking IDB official, Senior Vice President, Julie Katzman, came to Guyana to review the bank’s work.
While the administration has labelled Katzman’s visit as a review, sources have said that there was deep worry over project implementations in Guyana.
Recently, Opposition Leader, Bharrat Jagdeo, even raised questions over IDB’s work here.
Over the last few months, there have been reports, including letters, about the performance of projects, including the electricity sector.
Even Finance Minister, Winston Jordan, was critical in one case of more than US$60M was sitting doing nothing since 2012. The money was earmarked for the expansion of the Sheriff Street/Mandela Avenue.
Consecutive governments have been turning to the bank for financing on projects involving roads, water and other major infrastructure initiatives.
According to the ‘Country Strategy’ document, the IDB Group continues to be Guyana’s most active multilateral partner.
“The bank contributes 42.4 percent of the country’s external financing and accounts for 70 percent of total multilateral financing. The support of the IDB Group is predominantly focused on the public sector, with outstanding sovereign-guaranteed debt totalling US$492.3 million.”
During the 2012–2016 Country Strategy (CS) period, IDB said, approvals were higher than expected, with additional resources leveraged for programmes in energy, water and sanitation, small and medium enterprise (SME) development, and a forest carbon partnership.
Problems
“In total, 13 new loan and investment grant operations and 30 technical cooperation products (TCs) were approved. Loan approvals exceeded the high-scenario lending envelope by 39.1 percent and totalled US$143.6 million (of which US$34.1 million was for policy-based loans).”
Investment grant approvals were US$51.9 million through contributions from the Guyana REDD+ Investment Fund, the European Union, and the Global Environment Facility.
Four Multilateral Investment Fund (MIF) operations were also approved for a total amount of US$2.8 million.
According to the document, during the previous period- 2012-2016, the bank’s activities focused on four priority areas- natural resource management, sustainable energy, private sector development, and public-sector management- across nine sectors, with “modest results”.
“By the end of last year, 54 percent of the portfolio was classified as “alert” or “problem,” while the disbursement rate for loans fell from an annual average of 8.6 percent in 2012 to 4.4 percent in 2016.”
IDB said that as a result, there was a significant decline in net cash flows to Guyana, with an all-time low in 2016.
“The bulk of the IDB’s projects were in infrastructure—water, transport, and energy sectors—all of which faced delays during the decision-making and procurement stages. The change in administration in 2015, the first after 23 years under regular general elections, slowed execution across the Government’s public-sector investment programme due to a comprehensive portfolio review.”
However, IDB’s local office said that although an additional time constraint on execution, this procedure marked the beginning of an iterative process by which the Government, development partners, and the private sector identified bottlenecks in the current project management system and developed joint solutions.
More monitoring
With regards to some of the problems faced, the IDB document said that hindrance noted by the country team was the lack of sector specialists on the ground, which prevented real-time problem solving and necessary support for project design.
“Recommendations made by the Office of Evaluation and Oversight (OVE) are in line with this assessment and have informed the institutional strengthening focus of this new strategy.” Specifically, the Bank’s Board of Directors endorsed four of OVE’s recommendations for future engagement in Guyana.
This tightening of monitoring including the local IDB office working even more closely with the government to develop and institutionalise a project management system that combines core procurement functions across programmes.
IDB is also moving to introduce an “adequate level” of IDB Group staff support in each area of the programme to enhance project implementation and achievement of results.
The bank will also be moving to have design projects that fit the institutional environment, to build on one another, and incorporate its Office of Institutional Integrity (OII) input as part of project risk assessment.
IDB is concerned about the statistics of Guyana and wants to increase its support for the generation and publication of data by continuing to work with the government to strengthen the national statistical system.

Sign In To Reply
Post
Current Visitors: 185 (7 members, 178 guests)
Welcome to the Original Guyanese Discussion Forums, first established in 1996. Here you can discuss, ask questions or generally debate anything related to politics, movies, music, health or just gyaff away your day/night here. A note of warning, the Political forum is not for the faint of heart.  We do have some rules, so please adhere to them .
Do not post any messages that are obscene, vulgar, sexually-orientated, racist, hateful, threatening, or that otherwise violate any laws. Do not post any messages that harass, insult (name calling), belittle, threaten or mock other members.

Join Now
Totaram replied:
Read the article on Jonas' lawsuit and then join the conversation. He is/was arguing that the president doesn't have the authority to...
Django replied:
Please read Timothy objections to Granger appointment.

Prashad replied:
Thanks Cain. The wife told me that there is a French area there. I don't know one word in French.