Hope they find them and hang them!!

Guyana need to build a devil island prison deep in the interior. Where escape is impossible. Then give these dogs long sentences.

Yo'all remember the video above ...

Four days after he and a friend brazenly relieved another motorcyclist, a suspected serial robber ended up in hospital while attempting to rob another biker. 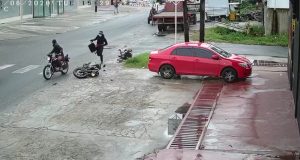 The two robbers caught on camera last weekon Broad Street with their victim and his bike on the ground.

Police said that the suspect, a 22-year-old East Ruimveldt Housing Scheme resident, and an accomplice, were apparently targeting individuals on motorcycles.
Last Monday, the robbers, who were on a motorcycle, cornered another motorcyclist in Albouystown.
A CCTV recording showed robbers ramming into their victim. When the man falls, one of the robbers relieves him of a haversack and other belongings before escaping with his accomplice.
The robbers appeared undeterred that their brazen attack was widely circulated on social media.
On Friday, they targeted another motorcyclist in Cooper Street, Albouystown, but luck was not with them.
According to a police release, “the suspects attempted the same stunt as seen in the video, last evening, but fell off their motorcycle and injured themselves.”
The 22-year-old was arrested, while his accomplice “was reportedly whisked away from the scene and is currently being pursued by investigators.”

Bring back the death penalty in Guyana !!! Granger was awarding and assisting Bandits by pardoning them.

Those boys were robbing people so they can put their earnings in the offering plates at church. COVID-19 put a dent into the church's take. They needed outside help.

LJP calls on GECOM Chair to dismiss Lowenfield
7 hours ago
Breaking News... Missing Documents, Look at this video and the images.
7 hours ago