Why are they creating so much ballyhoo about Constitutional Reform, and why am I not particularly enthused? Why do I get the feeling that we are going to get shafted again for the third or fourth time, and again and again for several more times in the future? Because, frankly put, the Constitution Burnham built, and the Constitution they have repaired, and are now trying to dismantle and re-construct, have nothing to do with the people living under it, but only to enable the landlords “seize” power and shelter them and their buttressing bunch of frills indefinitely. That is why Guyanese people do not vote for individuals on the merit of those individuals, but they are forced to vote for a party that approximates most closely to, first and foremost, their ethnicity, and followed by social/economic status, ideology (or lack of it), class, and other corrupting criteria. (Incidentally, it was a similar system popularly used by Real Estate Agencies, in New York in cahoots with banks to submit/approve BUNDLES of mortgage applications, instead of single, individual applications, with each bundle deliberately hiding some very corrupted applications. …resulting in the near collapse of the US economy.)

I daresay, this aspect of the forthcoming Constitution – voting for a wholesale party instead of individuals on the merit of each of individual, will remain like marmite – untouched. Secondly, and even more importantly, they have signaled loud and clear how they intend to marginalize, de-nationalize, de-citizenize, illegalize and ostracize the diaspora. This is most troubling. Because a person cannot be stripped of his nationality and the rights of such nationality, not even if you shoot that person by firing squad or jettison him off into space.

Article 15 of the Universal Declaration of Human Rights states that “Everyone has the right to a nationality,” and “No one shall be arbitrarily deprived of his nationality.”

Sadly, this right is going to be denied the diaspora simply because the parties are unable to conduct transparent absentee voting. So, they are going to violate the rights of more Guyanese living outside of Guyana than Guyanese living in Guyana because of their ignorance/inability. I hear the bells tolling. I can go on, I am that disgusted, but I quit here, not before reminding them that the diaspora does not consist of a static bunch of septuagenarians who will soon fade out into the sunset; on the contrary, it is a dynamic group, geometrically growing quantitatively and qualitatively every day. Think about that. Reminds me of a guy who was bullying my father and threatening to beat him up. My father told him, “Before you beat me, let me tell you, I got six sons, the oldest is thirty and the youngest is eighteen. Now go ahead and beat me.” The bully apologized and ran, carrying his tail tightly tucked behind him. Yu betta tek warnin.

APNU+AFC candidate Moses Nagamootoo was yesterday sworn in as Prime Minister and first Vice-President of Guyana by newly-appointed Presi-dent David Granger and vowed to bring about constitutional reform.

Arriving at the swearing in ceremony at the Ministry of the Presidency with his wife and daughter, Nagamootoo took the oath as Guyana’s new Prime Minister, replacing former PPP/C Prime Minister Samuel Hinds. He promised to perform his duties as Prime Minister and First Vice President without fear or favour. 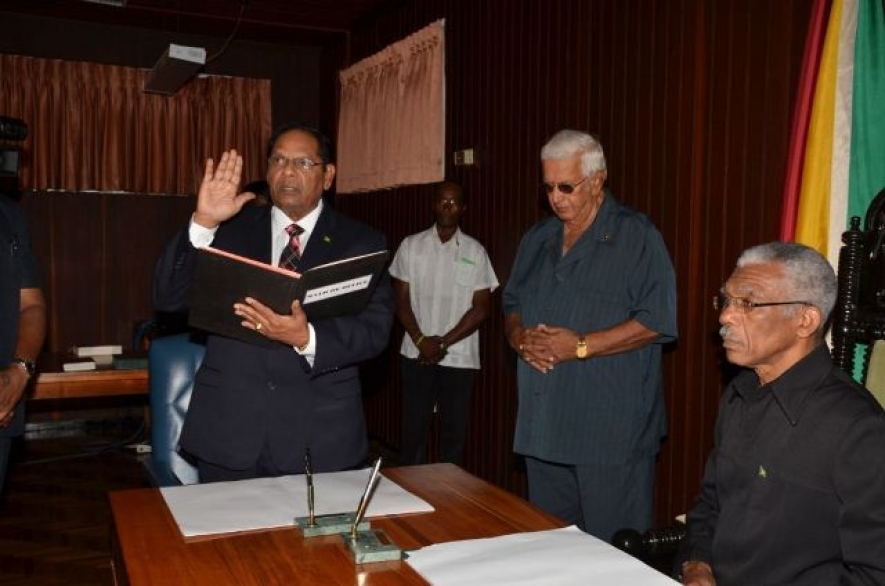 Speaking with the media after he was sworn in, among other ministers of the coalition government, Nagamootoo stated that he will focus on bringing the government together but, moreover, high on his agenda is information and constitutional reform.

He said he has an idea on where to begin with constitutional reform and part of that will be revising the powers of the president and excess powers of the executive.

“I want to start on humbling of the powers of the president, the excess powers of the executive and to bring about inclusion within the government system,’ he added.

He, however, indicated that whosoever would be heading the process of constitutional reform will have a “full plate” of issues to handle.

Nagamootoo added that his other priorities are to clean up the city and send a message to all Guyanese that the “elections are behind us and that we have to now work together.”

According to the Cummingsburg Accord of the APNU+AFC coalition government, the president will delegate the Prime Minister to be responsible for domestic national affairs and the chairing of the Cabinet; recommending Ministerial appointments and providing the organizational structures of Ministries for the approval of the President; nominating the Head of Agencies and Non-Constitutional Commis-sions with the required and agreed democratic mechanisms of consultation and also domestic security.

After Nagamootoo was sworn in along with the other ministers of government, President Granger reaffirmed his commitment to Guyana becoming a less segregated and poor country.

He told his ministers that they were on “one team” and that he was confident that they would give their support to him and Nagamootoo.

APNU+AFC candidate Moses Nagamootoo was yesterday sworn in as Prime Minister and first Vice-President of Guyana by newly-appointed Presi-dent David Granger and vowed to bring about constitutional reform.

Speaking with the media after he was sworn in, among other ministers of the coalition government, Nagamootoo stated that he will focus on bringing the government together but, moreover, high on his agenda is information and constitutional reform.

Eh-eh ... so what happen Nagamootoo -- in the five years as Prime Minister with specific responsibility to make the needed changes to the constitution .... nothing was done/achieved.

Eh-eh ... so what happen Nagamootoo -- in the five years as Prime Minister with specific responsibility to make the needed changes to the constitution .... nothing was done/achieved.

WTF you expect them to do when they were facing a vote of no confidence?

Sign In To Reply
Post
Current Visitors: 132 (1 member, 131 guests)
Welcome to the Original Guyanese Discussion Forums, first established in 1996. Here you can discuss, ask questions or generally debate anything related to politics, movies, music, health or just gyaff away your day/night here. A note of warning, the Political forum is not for the faint of heart.  We do have some rules, so please adhere to them .
Do not post any messages that are obscene, vulgar, sexually-orientated, racist, hateful, threatening, or that otherwise violate any laws. Do not post any messages that harass, insult (name calling), belittle, threaten or mock other members.
Do not use profanity, racial, ethnic, religious, or other slurs and stereotypes, or post sexually-oriented material, masturbatory and excretory references, or any other offensive material.

No quorum for crucial GECOM meeting
19 minutes ago