The differences between Trump's impeachment and Clinton's

In 1998, the majority of Americans (64%) did not support impeachment. And three days before Mr. Clinton was impeached, his approval rating was a high 63%, according to Gallup.

But there is no majority opinion about Mr. Trump. The most recent CBS News poll shows that less than half (46%) believe Mr. Trump deserved to be impeached. A smaller portion (39%) believe he did not. The rest were undecided. His approval rating earlier this week, however, was only 45%.

Neither presidents' approval ratings changed much throughout the impeachment process.

Washington — On December 18, 2019, Donald Trump became only the third U.S. president to be impeached by the House of Representatives. Bill Clinton was the last person handed this fate — less than a quarter-century ago on December 19, 1998.

One thing that has gone unchanged is the politics in Congress. In both cases, Democrats and Republicans largely defended their respective presidents. All but roughly a dozen House members sided with their parties in the impeachment of Mr. Clinton, a Democrat. There were defections on both sides of the aisle. In the case of Mr. Trump, a Republican, only two Democrats voted against impeachment, and the Republicans remained united.

In the end, the Senate voted to acquit Mr. Clinton two months later and with the support of some Senate Republicans. Senate Majority Leader Mitch McConnell is pushing for the same outcome for Mr. Trump.

While both presidents were impeached, the process this time had stark differences.

Clinton's charges stemmed from a sexual harassment case against him and from his extramarital relationship with a White House intern. The issue in Trump's impeachment deals more directly with his official duties. He's accused of withholding military aid from Ukraine to pressure its president to launch investigations that would hurt his political rivals, namely former Vice President Joe Biden, in the 2020 race. 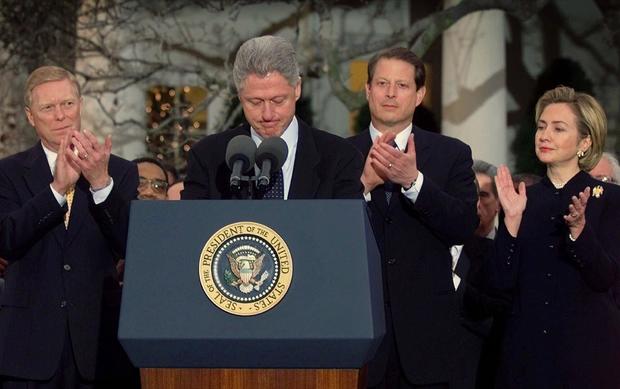 The public is far more divided today than in 1998 — a fact that reflects the increasing polarization of politics.

In 1998, the majority of Americans (64%) did not support impeachment. And three days before Mr. Clinton was impeached, his approval rating was a high 63%, according to Gallup.

But there is no majority opinion about Mr. Trump. The most recent CBS News poll shows that less than half (46%) believe Mr. Trump deserved to be impeached. A smaller portion (39%) believe he did not. The rest were undecided. His approval rating earlier this week, however, was only 45%.

Neither presidents' approval ratings changed much throughout the impeachment process.

One of the starkest differences between the two impeachments is in who collected the evidence.

When it was Bill Clinton, Attorney General Janet Reno appointed an independent counsel, Kenneth Starr, to investigate the Clintons' business deals. The investigation later expanded to include a probe of Clinton's testimony in a sexual harassment case and his grand jury testimony about an affair with White House intern Monica Lewinsky.

The Justice Department under Mr. Trump declined to investigate an intelligence community whistleblower's complaint about his July 25 phone call with the president of Ukraine.

That meant that it would be up to Congress if Democrats wanted further information. Instead of an independent counsel presenting evidence to the House Judiciary Committee, the House Intelligence Committee collected it and wrote a 300-page report summarizing their findings. They heard more than 130 hours of private and public testimony from 17 current and former diplomats and Trump officials. 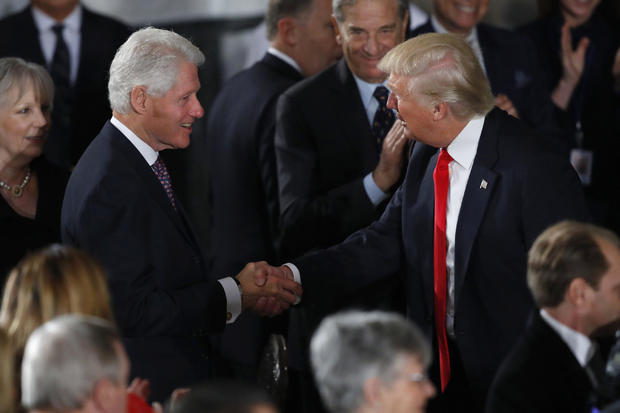 While Trump's Justice Department took a hands-off approach, the president himself was more involved in, and critical of, the impeachment process than Mr. Clinton.

Mr. Clinton famously said the process was beyond his control.

Mr. Trump, however, criticized the impeachment process on a daily basis and referred to it as a "hoax." Unlike Mr. Clinton, he also refers to the media as "fake news." Most of his critiques came in the form of tweets or comments during rallies and press conferences, but the day before the impeachment vote, he sent a letter to House Speaker Nancy Pelosi and urged her to "immediately cease this impeachment fantasy." He insisted that he's being treated worse than the defendants in the Salem Witch Trials, which resulted in executions, and accused Democrats, without evidence, of being guilty of what they impeached him for.

The speed of the Trump impeachment process was significantly faster than Clinton's, which is a complaint frequently raised by Republicans.

In 1998, three months passed between the time that Congress received the Starr report and the day that Mr. Clinton was impeached. This year, the House impeached Mr. Trump just over two weeks after the Intelligence Committee released its report.

In 1998, several witnesses were called, including Lewinsky. They were interviewed by the House impeachment managers, and the videos were played during the Senate trial.

It remains to be seen whether Trump's trial will include witnesses.

Mr. Trump has expressed interest in more testimony (even though his decision to block evidence and witnesses in the House is part of the reason for his impeachment), but he also said he'll leave that decision up to McConnell. And the Senate majority leader has indicated that he favors a quick, witness-free trial.

Unlike Mr. Trump, Mr. Clinton was impeached while serving his second term. The impeachment could impact his chances of winning a second term.

"He will now run as the very first president ever to be impeached and then go out on the campaign trail and run for reelection," said Margaret Brennan, the moderator of "Face the Nation" on CBS News. "We don't know if there's ultimately a political cost to him on that level. But today, it certainly hurts."

Sign In To Reply
Post
Current Visitors: 107 (6 members, 101 guests)
Welcome to the Original Guyanese Discussion Forums, first established in 1996. Here you can discuss, ask questions or generally debate anything related to politics, movies, music, health or just gyaff away your day/night here. A note of warning, the Political forum is not for the faint of heart.  We do have some rules, so please adhere to them .
Do not post any messages that are obscene, vulgar, sexually-orientated, racist, hateful, threatening, or that otherwise violate any laws. Do not post any messages that harass, insult (name calling), belittle, threaten or mock other members.

Join Now
Prashad replied:
There was always an India. White Arabs and their brown servants are claiming that there is no India so that white Arabs can steal the land.

shallyv replied:
When was there ever an India, Mits, before the British? Don't think of me as an Anglophile, please!
shallyv replied:
Anus is right! Remove him and put a more sensible PPP thief in the position! Fing petty larcenist! Typical PNC moron!
Mitwah replied:
Rama would like to be the first Governor General.