The top drivers from the first National Race of Champions, hosted by the Guyana Motor Racing and Sports Club (GMRSC) on Sunday last at the South Dakota Circuit, received their accolades on Monday night at the entity’s office on Woolford Avenue. 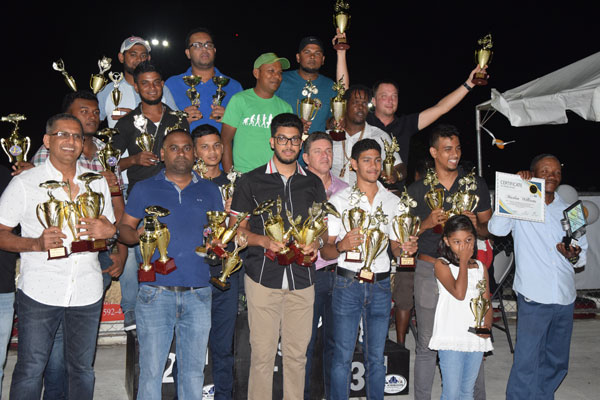 A group of the top motor racers from Sunday’s National Race of Champions pose with their accolades on Monday Night at GMRSC’s office.

The event served as a preliminary round to the Caribbean Motor Racing Championships (CMRC) which head of the GMRSC, Rameez Mohamed, indicated that he will be doing all in his power to have Team Guyana regain the title which they lost to current champions, Trinidad and Tobago.
Mohamed Ahmad (Sports Tuner) and Matthew Vieira (Superbikes – Superstock) were the only daredevils that completed sweeps in their respective classes on Sunday, while reigning CMRC group four champion Andrew King won the first two races in his class before crashing out in the third which Mark Vieira won.
Additionally on Monday night, the best performers at the curtailed ‘King of the Strip’ drag race meet last month also received their trophies, while the Club took the opportunity to honour the dedicated volunteers and marshals whose efforts helped make local motor racing a success.
See official results from the National Race of Champions below. (Calvin Chapman)

Welcome to the Original Guyanese Discussion Forums, first established in 1996. Here you can discuss, ask questions or generally debate anything related to politics, movies, music, health or just gyaff away your day/night here. A note of warning, the Political forum is not for the faint of heart.  We do have some rules, so please adhere to them.
Join Now
Loading...
Current Visitors: 139 (14 members, 125 guests)

Indians are easily fooled. They allow that Snakeoil Salesman to tell them what they want to hear. The funny thing is that the Orangutan...
2 minutes ago

Haaa, haaaa, haaaaa ... A joy ride to India for one day.
3 minutes ago

Bernie don't know how much it cost, but he thinks he knows who will pay
60 seconds ago

Trump heads to India, where massive rally and Taj Mahal visit await: What to know
2 minutes ago

Dow might take a thousand points hit today
12 minutes ago