Pull quote: “Getting politicians to take rational advice is no easy task.”
– Attorney at Law, Nigel Hughes
By Abena Rockcliffe-Campbell 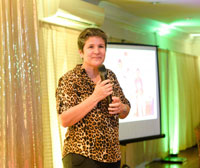 Many of those who are worried about the extent to which Guyana will really benefit from its vast oil wealth are also concerned about the fact that the Government of Guyana seems to be ignoring advice that, if acted upon, can result in the required changes in the country’s current trajectory.

Attorney at Law Nigel Hughes was a guest speaker on one of the panels. He spoke briefly on Guyana’s reliance on international advice, since the country has no history of oil and gas, and thus has a deficit of local experts.

In the question and answer segment, businesswoman and environmentalist, Annette Arjoon-Martins noted the fact that the Government of Guyana is spending millions of dollars on “experts”, but seems not to be taking much of the good advice being offered.

Arjoon noted that Guyana is at the critical stage of building its embryonic oil and gas industry. She said that this is the stage where certain decisions are most important.

Arjoon further noted, “I am noticing we have paid for a lot of expert advice, but we are not taking it.”

Arjoon asked Hughes for a proposition for the way forward. Hughes responded in acknowledgment that Guyana’s politicians seem to lean towards taking the advice that is not necessarily sound.  Hughes said, “Getting politicians to take rational advice is no easy task.”

He continued, “The question is how we create an environment in which that advice is known nationally and thus accepted nationally.” Hughes said that national knowledge of the advice offered reduces the options for the political class to ignore. “That is part of the solution.”

Hughes said that there must be national discussions, where the paid experts share their opinions.

“The opinions must not only be offered to the ministers, but across the country, so the country can understand the consequences of not following the advice. Hughes said that there will then be less scope for political action not consistent with the recommendations offered by the experts.

Advisor to President David Granger on Petroleum, Dr. Jan Mangal seems to be one of the good advisors that the Government of Guyana has retained but has refused to listen to.

It was reported in the press since last year that Dr. Mangal recommended that the government release the Production Sharing Agreement (PSA) it signed with ExxonMobil. But even after that, the government maintained secrecy until eventually releasing the contract last December.

Also, Dr. Mangal, a Guyanese who spent 18 years in the oil industry abroad, had written many letters promoting the need for transparency in the embryonic oil and gas industry.

On Monday, Dr. Mangal said that the PSA can be renegotiated.  He added that zero taxes and two percent royalties in the current agreement is not the international norm. 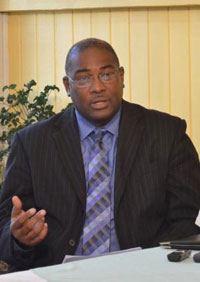 Delivering a presentation on the Government of Guyana’s Vision for the Oil and Gas Sector at the University of Guyana, Dr. Mangal said that the current contract must be compared to what obtains internationally.
Dr. Mangal noted that contracts should always be reviewed as new information becomes available.

“Contracts are always changed. A contract is an agreement between two people. Both parties need to be comfortable. If one party becomes really uncomfortable it will be changed,” Dr. Mangal pointed out.

He said that Guyana is a sovereign country and the evidence around the world is that contracts can be renegotiated as the situation changes.

Dr. Mangal’s comments seem to have rubbed the government the wrong way.

The Ministry of the Presidency subsequently issued a sharp statement distancing itself from his public statements.

It was stated, “The Ministry of the Presidency puts on record that Dr. Jan Mangal, Presidential Advisor on Petroleum, is not authorized to speak on behalf of His Excellency, President David Granger or the Government of Guyana.”

Yesterday, State Minister Joseph Harmon said that because of Dr. Mangal’s expertise, “as a citizen of the country he is free to give advice internationally and to the nation as a whole.”

The Minister said Dr. Mangal’s advice on petroleum is not the only one the President receives and what the President chooses to do with the advice, whether to reject or accept, is up to the President.

Dr. Mangal is an oil and gas professional, who has worldwide experience with oil majors and governments, a background in project management, decision analysis, facilitation, project economics, and a PhD in offshore geotechnical engineering.

On his LinkedIn profile, Dr. Mangal said he is “currently focused on ensuring Guyana’s oil resource benefits the people and future generations.”

Perhaps, providing lots of jobs for the "boys and girls" of the PNCR.

Welcome to the Original Guyanese Discussion Forums, first established in 1996. Here you can discuss, ask questions or generally debate anything related to politics, movies, music, health or just gyaff away your day/night here. A note of warning, the Political forum is not for the faint of heart.  We do have some rules, so please adhere to them.
Join Now
Loading...
Current Visitors: 105 (13 members, 92 guests)
How will you know the bottom?
43 minutes ago
Unshakeable Peace Philippians 4:4-9 Have you ever thought that a vacation would relieve your anxiety or that you could work out your...
47 minutes ago

Jagdeo and the PPP gave Lowenfield their blessings with a “no objections “ even when I wrote that Lowenfield was a known PNC election...
1 hour ago
It is quite evident that there will be massive rigging. PNC will brush aside observers and do anything to stay in power. A third...
1 hour ago

2020 will be the mother of all rigged elections. No wonder PNC already celebrating.
2 hours ago

Not a Sermon only a Thought
47 minutes ago

Eccles residents to vote in cow pasture
1 hour ago

Reduction in private residences as polling places
2 hours ago

Put somethings in order
3 hours ago

Trump heads to India, where massive rally and Taj Mahal visit await: What to know
4 hours ago