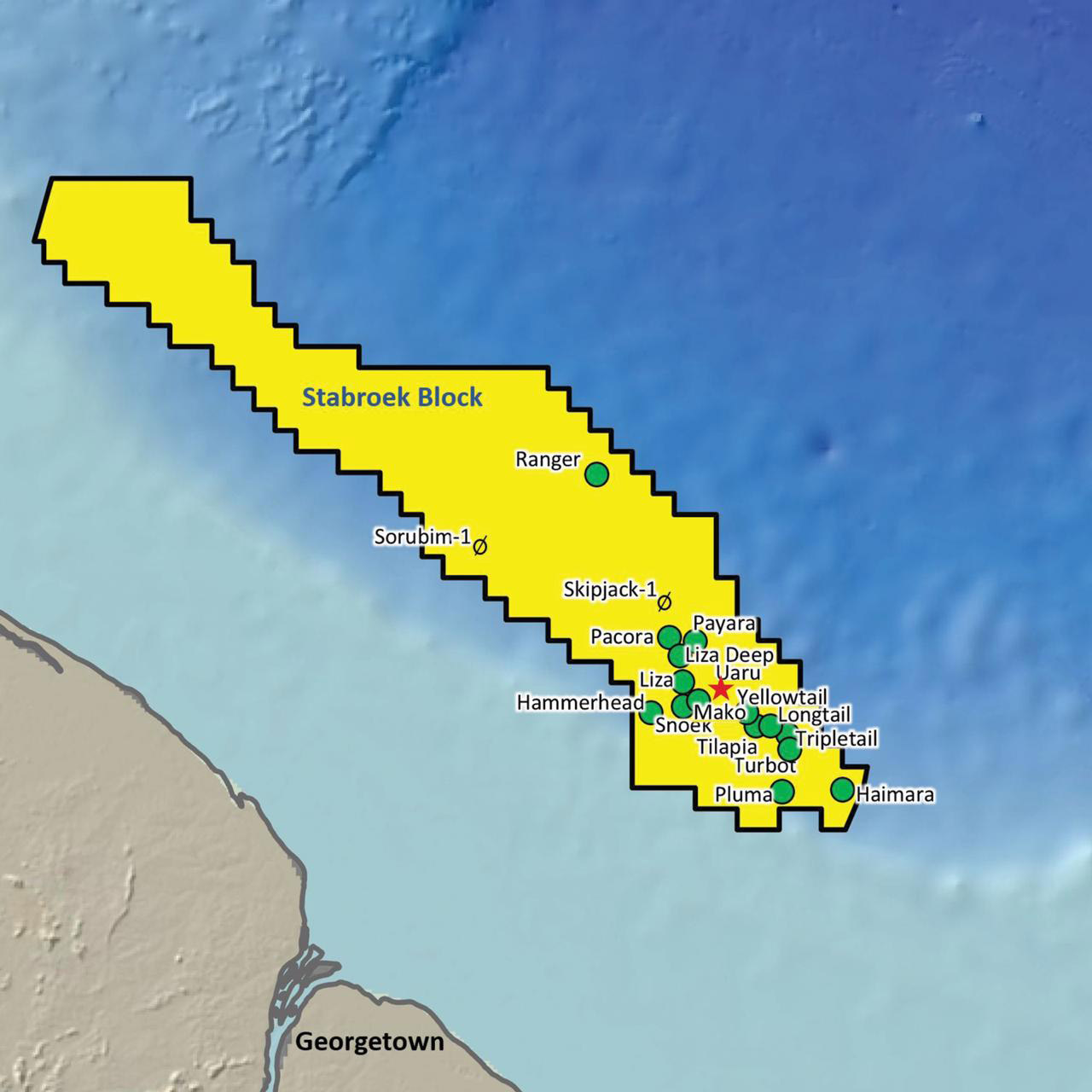 ExxonMobil yesterday said it has increased its estimated recoverable resource base in Guyana to more than eight billion barrels of oil-equivalent (BOE) and made a further oil find northeast of the producing Liza field.

The whopping eight billion BOE underlines the high stakes at the upcoming March 2 general elections and the challenge that the next administration will have in managing the sector.

The new BOE is roughly 33% above what had been declared as recently as December last year when Exxon made its 15th discovery at the Mako-1 well.

The 16th find on the Stabroek Block was made at the Uaru exploration well.

A release yesterday from Exxon said that the new recoverable resource estimate includes 15 discoveries offshore Guyana through year-end 2019. The Uaru discovery is the first of this year and will be added to the resource estimate at a later date.

“With recent high-quality finds at Tripletail and Mako contributing to our recoverable resources, our investments will continue to provide benefits for the people of Guyana,” said Mike Cousins, senior vice president of exploration and new ventures at ExxonMobil.

“The Uaru discovery is another positive step as we begin a new decade with the Co-operative Republic of Guyana and our co-venturers”, he added.

Output from the Liza Phase 1 development is currently ramping up and will produce up to 120,000 barrels of oil per day in the coming months, using the Liza Destiny floating production storage and offloading vessel (FPSO), the release stated. The first one million barrels of oil have already been shipped to an ExxonMobil refinery.

The Liza Unity FPSO, which will be employed for the second phase of Liza development and will have a production capacity of 220,000 barrels of oil per day, is being built and is expected to start production by mid-2022.

Pending government approvals and project sanctioning of a third development, output from the Payara field north of the Liza discoveries could start as early as 2023, reaching an estimated 220,000 barrels of oil per day.

The release said that four drillships in Guyana continue to explore and appraise new resources as well as develop the resources within approved projects. A fifth drillship is to be deployed later this year.

The BOE has moved up progressively since ExxonMobil struck first oil in the Liza-1 well in May 2015.

Yesterday’s disclosure about the scale of the reserves in the Stabroek Block will up the pressure on the next administration to improve the terms of the 2016 Production Sharing Agreement (PSA) signed between the APNU+AFC government and ExxonMobil subsidiary Esso Exploration and Production Guyana Limited. Clinched after the major oil discovery in 2015 it catered for a 2% royalty rate and a paltry signing bonus of US$18m which was styled as a legal fund to prosecute Guyana’s case against Venezuela at the International Court of Justice.

The PSA also frees Exxon and its partners from paying taxes and contains a stability clause which has been described as oppressive and infringing upon the right of the state to legislate for oil and gas.

A widely criticized provision also allows the US oil company and its partners to claim as much as 75% of the oil for expenses and recovery of their investment with the remaining 25% profit oil being split between Guyana (12.5%) and Exxon and its partners at 12.5%. The expense recovery period is open-ended according to the PSA.

The PSA also does not cater for a robust local content policy and the law that would underpin such was not piloted by the David Granger administration prior to the dissolution of the 11th Parliament last month.

In a letter in yesterday’s Stabroek News, Granger’s former petroleum advisor Dr Jan Mangal argued that by freeing Exxon and its partners of tax obligations, Guyana would have lost as much as US$5b.

Mangal has also argued strongly that before the third ExxonMobil well development – Payara – is permitted to occur, the PSA should be vastly improved.

Two well developments have already been approved, Liza-1 which is producing oil and the Liza-2 which is currently in development.

Speaking to the Sunday Stabroek recently, Mangal said “If we see the government approve the Payara project without a renegotiation of the contact then I believe that there is really no hope for Guyana.  But I want it known that it is not too late. It’s never too late. This is a long term industry, something that will go on for the next 30, 40, 50 years. And the longer we wait, it will be so much more difficult.

“I advised not to approve the then projects until we could get a better deal on future projects. Around that time, Bynoe [Director of the Department of Energy Dr. Mark Bynoe] and Wilks [United Kingdom based Adviser Matthew Wilks] came in and they probably recommended that government approve the Liza-2. That was done and it was not the correct thing to do. They should not have done that”, he said.  He added that holding approval and getting expert analysis for the project and then using the said information as bargaining leverage would have been a better plan. “It is not just the Stabroek Block but also the Kaieteur and Canje Blocks. Those are things we need to address,” Mangal pointed out.

Welcome to the Original Guyanese Discussion Forums, first established in 1996. Here you can discuss, ask questions or generally debate anything related to politics, movies, music, health or just gyaff away your day/night here. A note of warning, the Political forum is not for the faint of heart.  We do have some rules, so please adhere to them.
Join Now
Loading...
Current Visitors: 50 (3 members, 47 guests)
Jenny from da block
4 hours ago

Taking politics out of the picture. Shakira has to be admired. An Arab girl from Columbia who has been working since she was 14. Who...
5 hours ago

There is a huge difference though. Bloomberg was a public employee when he was mayor and he didn't behave like Trump even though he has...
5 hours ago

Ray. Your bai Bloomberg was an utter failure.
5 hours ago

Ralph Ramkarran, A New & United Guyana.. will he make it to the finish line...
7 hours ago

Trotman’s incompetent or non-fiduciary negotiating on the Exxon contract pales before the brazen, EXTRAORDINARY THEFT of the CANJE Oil Block...
7 hours ago
Six in 10 Americans say they feel better off after first 3 years of Trump, poll says
9 hours ago