If all dem who plotting and conspiring to steal de election had put dem energies to help fight de COVID 19, de virus would a dun run from Guyana and gone back to wheh it come from.

When you want tek tricks and mek it a living, you gat to come to Guyana and talk to de HAP-New+ HAY-Eff-See. De Coalition would outsmart even de devil.

Guyana is being made to look like all dem people who live hay is a pack of idiots.

Some ah dem bread well-buttered. But dem want it now be nut-buttered. Others nah know wha dem gon do when guvment change. So dem fighting fuh stay in power.

Dem boys in a way glad how things playing out. Because dem boys getting fuh see people fuh who they truly are. De masks dropping off dem face.

You gat some people who turn out to be educated dunces. With all dem education, dem still want fuh mek people believe lie.

Dem trying so hard to convince people about a lie dat dem start to believe dem own lie. De devil nah stand a chance with dem.

Dem boys gon lose a lot of friends on purpose. Because dem boys nah want some of dem people around dem no more. Dem like snake in de grass. Dem see wrong and call it right. Dem support dishonesty. Dem boys nah gat problem with dem supporting de party wha dem like. But when it comes to dishonesty, dem boys does draw de line. You and me cannot be friends if you is a barefaced liar and thief. Sorry…find some other friends.

After a week of the David Granger Coalition arguing that last Court of Appeal (COA) decision was the basis for GECOM Chief-Election-Officer’s Keith Lowenfield’s submission of a report that discarded 115,000 national recount valid votes to hand it a victory, Joseph Harmon, the Coalition campaign co-chair, has made a filing to the Caribbean Court of Justice (CCJ) arguing the opposite. 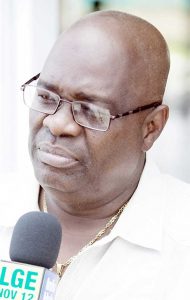 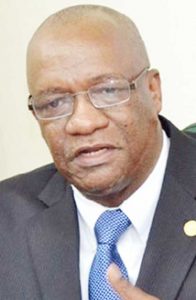 This change of direction was captured in Harmon’s intervention in the current CCJ appeal made by Irfaan Ali and Bharrat Jagdeo against the COA decision in the Eslyn David case.

In the filing, Trinidadian attorney Raphael Ajodhia argued, on behalf of Harmon, that “the Court of Appeal made no determination as to whether the votes cast were valid or not, and, imposed no criteria by which the validity of votes would be determined. The Court of Appeal simply exercised its jurisdiction in a limited manner to interpret Article 177(2)(b) of the Constitution to mean ‘more valid votes are cast…’. It is difficult to see, with respect, what the objection to this finding is when divorced from the partisan perspectives.”

This is in stark contrast to Lowenfield’s claims earlier this week when he on Tuesday, in defiance of a Court of Appeal stay of its Monday order, submitted a report to Chair of the Guyana Elections Commission, Claudette Singh, arguing: “I have taken note of the guidance of the Court of Appeal in Eslyn David v Chief Elections Officer et al in the preparation of my Report under Section 96 of the Representation of the People Act and providing advice as required by Article 177(2)(b) of the Constitution of the Cooperative Republic of Guyana.”

Two days later, on June 25, the Coalition released a lengthy statement in support of Lowenfield and his claim that he was being guided in his actions by the COA ruling.

“The Representation of the People Act [Chapter 1:03 of the Laws of Guyana, at Section 96],” read the statement, “requires the Chief Election Officer (CEO) to ascertain the valid votes cast in an election. In keeping with the guidance set out by the Court of Appeal in Eslyn David v. Chief Election Officer, et al., and as he is required to do by the Representation of the People Act [at Section 96], the CEO prepared and submitted his Election Report on 23rd June 2020. That report shows clearly that the APNU+AFC Coalition received 171,825 and the People’s Progressive Party Civic (PPP/C) received 166,343 of the valid and credible votes cast at the General and Regional Elections. The CEO, clearly, is empowered and instructed by the Constitution and Laws of Guyana, not by any other entity or person. He has discharged his functions within the ambit of the law.”

The Coalition has argued since then that the Court Appeal judgment gave Lowenfield the power to decide what is an invalid vote by discarding, without evidence, valid votes as certified by the recount process, based only on claims of irregularities made by APNU+AFC agents during the recount. This was the justification for the CEO submitting figures that showed APNU+AFC winning the elections with 171,825 votes ahead of the PPP/C’s 166,343. The certified recount figures – which have been endorsed by the CARICOM scrutineer team sent to observe and report on the process – show the reverse, with the PPP winning with 233,336 votes and the APNU+AFC coming in second with 217,920 votes.

While Lowenfield and the Coalition have claimed that the CEO acted within his power as a “constitutional officer”, several legal experts have pointed out that the position of Chief-Election-Officer is a statutory one, existing in basic law, and is only mentioned tangentially in the Constitution, not defined by it. Notably, outgoing Chair of CARICOM and chief broker of the recount arrangement, Barbadian Prime Minister Mottley, has come out in strenuous opposition to Lowenfield’s action. In a scathing statement in the wake of the CEO’s latest report three days ago, she reiterated that the recount process was found to be sound by the CARICOM team.

“Therefore, we must ask,” Mottley had said, “on what grounds and by what form of executive fiat does the Chief Election Officer determine that he should invalidate 1 vote, far less over 115 000 votes when the votes were already certified as valid by officers of the Guyana Elections Commission in the presence of the political parties.”

Her statement was met by at times rabid opposition by Coalition representatives, in defence of the CEO’s figures. Harmon’s filing to the CCJ, however, represents an almost complete departure from the Coalition’s argument that the COA decision provided Lowenfield with the legal authority to determine what constitutes a valid vote and then to invalidate votes.

“Simply put,” Harmon argues in the filing, “the effect of the Court of Appeal’s decision is that the election of a President will be determined on the basis of valid votes in accordance with the law. The determination of what constituted valid votes was not a matter that the Court of Appeal, properly, purported to exercise jurisdiction over, and, accordingly, there can be no serious objection to the decision when viewed objectively.”

While Harmon was not an original party to the CCJ case, he was given leave by the Court to intervene and make representation on behalf of the APNU+AFC. The case is scheduled for a single, omnibus hearing on Wednesday, July 1, with a decision to be rendered not long after.

Gilly saluting you but Gilly knows exactly where he came from and part of it lies in West Africa.
3 hours ago

The moderator there is much worst than Demerara Guy. At least Demerara Guy only gets angry when Prashad insults his buddy Burnall. The...
3 hours ago

For all those of you who think Canada is not an anti-Paki Country. https://www.msn.com/en-ca/news...16lcC6?ocid=msedgntp
4 hours ago

Granger govt appointed 44 State board members after elections...
3 hours ago

LJP calls on GECOM Chair to dismiss Lowenfield
8 hours ago
Breaking News... Missing Documents, Look at this video and the images.
9 hours ago