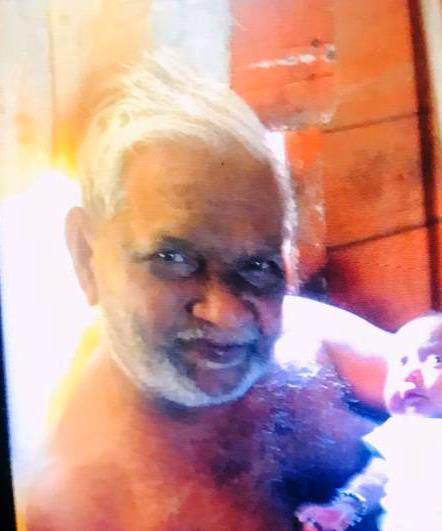 Four men including the son of Deochand Ramsahoye, the septuagenarian who died after he was brutally beaten during the wee hours of Sunday were yesterday charged and remanded to prison.

They were all arraigned before Magistrate Fabyo Azore who read the charge which stated that they murdered Ramsahoye at 109 Pump Road, Strathspey.

The men were not required to plead and were remanded to court until March 16.

Seventy-two-year-old Ramsahoye was beaten on Sunday morning by a businessman and his relatives who launched an attack on his family. Another one of Ramsahoye’s sons was also allegedly involved in the attack. The attack stemmed from an accusation by the employer of one of Ramsahoye sons, who accused him of stealing a quantity of cash and a gold chain.

Ramsahoye succumbed at the Georgetown Public Hospital around 1.30 am on Tuesday.

An autopsy yesterday showed that he died from multiple injuries compounded by blunt force trauma to the head.

Police investigations revealed that at around 2.45 am on Sunday, Taijwattie Bhawanie, Ramsahoye’s daughter-in-law was awakened by the breaking of windows. She saw four males hurling objects at the house.

She later heard that the attack was an act of revenge committed by persons who alleged that her brother-in-law had stolen a gold chain and cash belonging to one of them.

The suspects subsequently gained entry to the upper flat where Ramsahoye and his wife Farida Ramsai resided and proceeded to ransack the home, forcing Bhawanie and her family to flee the residence, police said.

After the suspects fled, Bhawanie returned to her home and discovered that most of her valuables were destroyed. She then proceeded to the upper flat where she found her father-in-law covered in blood with lacerations to his face and body.

Badazz Indians not supposed to beat up their own father. They are supposed to keep their rage to deal with the PNC slo fiah mo fiah violent crowd.

Seems like it's time for the return of Jesus and /or Krishna.

HANG EVERY FRIGGIN ONE OF THEM! LEACHES TO SOCIETY AND HUMANITY AS A WHOLE.

so you like that they beat up the old man to prove themselves?

is that what you define as badass?

but I see the sarcasm now

Since I started reading crime stories from Guyana, the people involved have no compassion for the victim or thinking of the consequence after. They go the whole nine yards for the kill. These guys are in their prime of life. One dead and four will be in jail. Mumma, daddy, pickney, and friends are all equally measured in any kill for a fraction of the cost. A brother killed his brother for food not so long ago. It doesn't matter if it worth it or not. Your death is the ultimate sacrifice.

Prince, the PNC has reduced the Guyanese people to beasts and Animals!!!

Sign In To Reply
Post
Current Visitors: 2,324 (0 members, 2,324 guests)
Welcome to the Original Guyanese Discussion Forums, first established in 1996. Here you can discuss, ask questions or generally debate anything related to politics, movies, music, health or just gyaff away your day/night here. A note of warning, the Political forum is not for the faint of heart.  We do have some rules, so please adhere to them .
Do not post any messages that are obscene, vulgar, sexually-orientated, racist, hateful, threatening, or that otherwise violate any laws. Do not post any messages that harass, insult (name calling), belittle, threaten or mock other members.
Do not use profanity, racial, ethnic, religious, or other slurs and stereotypes, or post sexually-oriented material, masturbatory and excretory references, or any other offensive material.