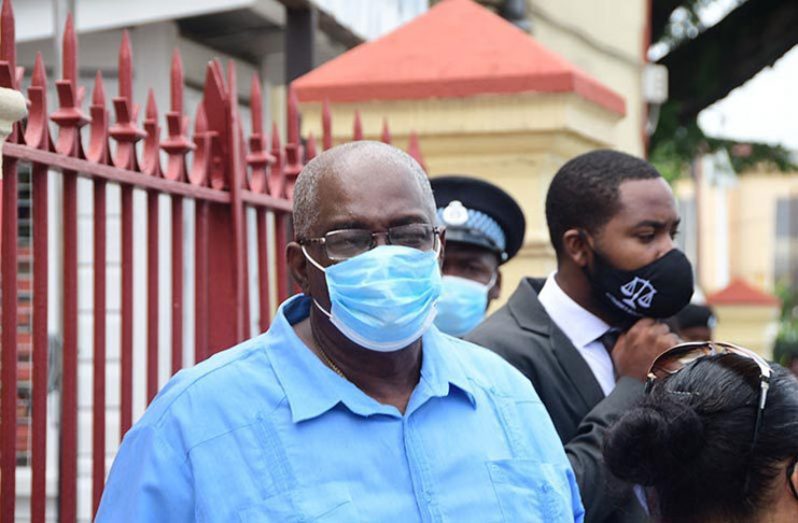 A SIX-MEMBER team of prominent lawyers has been hired by the Director of Public Prosecutions (DPP), Shalimar Ali-Hack, S.C, to serve as special prosecutors on several cases before the court involving electoral fraud and misconduct in public office which was reportedly committed during the March 2 General and Regional Elections.
The DPP has granted a Fiat to Attorneys-at-law Sanjeev Datadin, Glenn Hanoman, Mark Conway, Ganesh Hira, Arudranauth Gossai and George Thomas, who would now be prosecuting the matters on behalf of the State.
But Attorney-at-law, Nigel Hughes, who is representing some of the defendants in the case, strongly opposed Datadin’s role. Hughes is contending that Datadin is a Member of Parliament for the People’s Progressive Party Civic (PPP/C) and giving him the responsibility to prosecute a matter which is “highly political in nature” would result in his clients not having a fair trial.
But Datadin disagreed and noted that his affiliation with the PPP/C will not affect the cases before the court.
“There are five other prosecutors. The risk that is being complained of is really nothing to do with the reality of what is going on,” Datadin told reporters outside the Georgetown Magistrates’ Court on Friday.

He further contended that the argument of bias does not relate to a prosecutor.
“As long as the tribunal is independent, whatever duties that have to be performed by the prosecutors are not being performed by me alone. There are six persons who, as a group, have been given a Fiat by the Director to go ahead…” Datadin argued.
Meanwhile, Hughes is also asking the court for the offences to remain indictable which means it will be tried at the High Court before a 12 member jury.
This request came after Datadin asked for a summary disposal of the charges which would allow the defendants to plead to the offences, but Magistrate Sherdel Isaacs-Marcus told Hughes to put his submission in writing for the next hearing of the case.
Those who have been charged with offences relating to electoral fraud and misconduct in public office are: Chairperson of the People’s National Congress Reform (PNC/R), Volda Lawrence; Opposition activist, Carol Joseph; Deputy Chief Elections Officer, Roxanne Myers and Chief Elections Officer (CEO) of the Guyana Elections Commission (GECOM), Keith Lowenfield, along with his clerks, Michelle Miller, Denise Bob-Cummings, Returning Officer for Region Four, Clairmont Mingo, GECOM Elections Officer, Shefern February and Information Technology Officer, Enrique Livan.
They are all accused of inflating the results of Region Four – Guyana’s largest voting district – to give the APNU+AFC Coalition a majority win at the March 2 polls when in fact, the PPP/C had won by 15,000 more votes.

This dispute resulted in several legal challenges which ended up all the way to the Caribbean Court of Justice (CCJ) – Guyana’s highest court – and a five-month delay in the declaration of the results.

On Friday, the DPP withdrew the private criminal charges which were filed against Lowenfield, Lawrence and Mingo on the grounds that these charges are similar to those recently filed by the Guyana Police Force.

In Lowenfield’s case, his three private charges were filed by PPP/C member, Desmond Morian, and General Secretary of The New Movement (TNM), Daniel Kanhai, on June 30, 2020.
Lowenfield now has six charges remaining against him; those charges were filed by the police following a “comprehensive” investigation into the elections and its aftermath. He is on $300,000 bail.

The charges include three counts of misconduct in public office and three counts of forgery.
As it relates to Lawrence and Mingo, those private criminal charges were filed by Charles Ramson Jr. in March in relation to the controversial District Four results.
Last Wednesday, five persons, including Lawrence, Joseph and Mingo, were hauled before the court on electoral fraud charges which were filed by the police.
Lawrence, Joseph, Mingo and GECOM clerks, Miller and Bob-Cummings, were all arraigned separately before Principal Magistrate, Sherdel Isaacs-Marcus, at the Georgetown Magistrates’ Court.

Mingo and Lawrence were charged jointly. It is alleged that on March 5, 2020, at Georgetown, with intent to defraud the public, they uttered a certain forged document, that is to say, a report purporting to be a true declaration of all votes cast in District Four for the March 2 General and Regional Elections, knowing same to be forged.
They were each released on $30,000 bail.

Mingo and Joseph were also jointly charged. It is alleged that on March 13, 2020, at Georgetown, with intent to defraud the public, they uttered a certain forged document purporting to be a true report of all votes cast in the elections, knowing same to be forged.
They were both released on $30,000 bail.

Additionally, Joseph was slapped with two other charges which alleged that on March 13, at High and Hadfield Street, Georgetown, she conspired with Mingo and others, to declare a fraudulent account of votes for District Four in the March 2 elections. She was released on a total of $60,000 bail.
Miller was also slapped with two charges. It is alleged that between March 3 and March 5, at High and Hadfield Street, together and with others, with intent to defraud the people of Guyana, being appointed as a Clerk for District Four by GECOM for the purpose of the elections, in assisting Mingo, she did not use the figures from the Statements of Poll for the purpose of ascertaining the figures to make the declaration of the results for the said elections as is required by law, thereby resulting in a false declaration being made for the said District Four. She was released on a total of $60,000 bail.
Further, Cummings was charged with two similar offences which were allegedly committed on March 13 at GECOM Headquarters, High and Cowan Street, Kingston. She too was released on a total of $60,000 bail.

The cases were adjourned to October 28.
Mingo is still facing several fraud charges, including uttering a forged document with intent to defraud the public, contrary to Section 278 of the Criminal Law (Offences) Act.
He was granted $600,000 bail on those charges and the case was adjourned to November 16, to allow the prosecution time to complete the filing of statements.

Nigel Hughes is FULL FULL of SHIT. He did not see PNC Lawyers representing all the Election Petitions?? The PNC even paid for their Lawyers. People like Nigel knows their supporters are DUMB FOOLS!!!

Lawyers aligned with the PPP including a sitting PPP - MP , prosecuting the case against Chief Election Officer Keith Lowenfield for Electoral Fraud.

Well anything right with this scenario ? that's how backwater country operates.

Excellent. In the end Lowenfield will be where he belongs. I that APNU/AFC newly completed jail.

The two petitions brought by the Coalition will also provide lots of evidence for many more Coalition principals/supporters to find long term stay in that same building.

Excellent. In the end Lowenfield will be where he belongs. I that APNU/AFC newly completed jail.

The two petitions brought by the Coalition will also provide lots of evidence for many more Coalition principals/supporters to find long term stay in that same building.

What hate for blacks and you call Trump a racist. Like you have inside information to know the outcome of the cases.

The problem with people like you, when another decision is made from what you foresee, you run away with your tail between your legs.

Sign In To Reply
Post
Current Visitors: 114 (2 members, 112 guests)
Welcome to the Original Guyanese Discussion Forums, first established in 1996. Here you can discuss, ask questions or generally debate anything related to politics, movies, music, health or just gyaff away your day/night here. A note of warning, the Political forum is not for the faint of heart.  We do have some rules, so please adhere to them .
Do not post any messages that are obscene, vulgar, sexually-orientated, racist, hateful, threatening, or that otherwise violate any laws. Do not post any messages that harass, insult (name calling), belittle, threaten or mock other members.

WAKENAAM,LEGUAN GET CRIME-FIGHTING BOAT
4 minutes ago