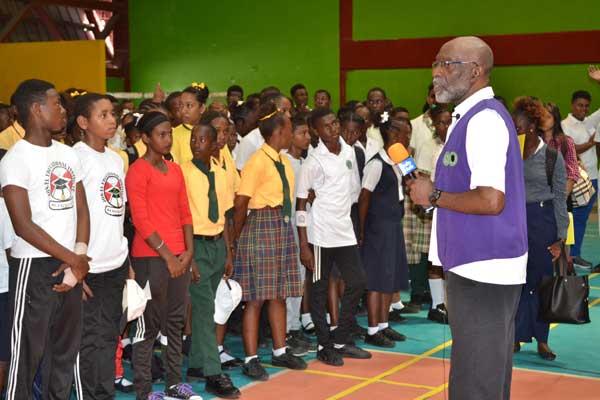 In brief remarks, Vincent Alexander, Chairman of the Forbes Burnham Foundation explained that the initiative, celebrated on the birth anniversary of the late president, commemorates one of his many pursuits.
“This year is the 95th birth anniversary and we celebrate it in various ways, we do things we think he would have done. One of the things he would have been involved in is the game of cricket and the involvement of young people in the sport,” Alexander told those gathered for the match.
The Chairman also thanked the youths for participating in the tournament and urged them to enjoy a clean game. “It does not matter whether you win or lose, it is how you play the game that matters. We want you to play the game in the spirit of camaraderie and to pursue that goal of national cohesion,” Alexander emphasised.
Director of Sport, Christopher Jones thanked the chairman and members of the Forbes Burnham Foundation for launching such an initiative, noting that it provides an insight into the country’s history for the youths.
“The National Sport Commission (NSC) is only too proud to be a part of these games, in fact, as part of our work programme in recognition of all of our past presidents, the NSC provides funding for the same. Hence, we will be celebrating the late President Cheddi Jagan in Region Six,” the Sport Director said.
Saints Stanislaus College is the defending girl’s champions, whilst for the boys, Christ Church & Cummings Lodge hold the two top positions. Matches were slated for East Bank secondary schools yesterday; schools in Region Three (Essequibo Islands-West Demerara) play today and East Coast Secondary schools tomorrow.  (Neola Damon)

Welcome to the Original Guyanese Discussion Forums, first established in 1996. Here you can discuss, ask questions or generally debate anything related to politics, movies, music, health or just gyaff away your day/night here. A note of warning, the Political forum is not for the faint of heart.  We do have some rules, so please adhere to them .
Do not post any messages that are obscene, vulgar, sexually-orientated, racist, hateful, threatening, or that otherwise violate any laws. Do not post any messages that harass, insult (name calling), belittle, threaten or mock other members.  Personal attacks are not permitted. Do not use sweeping generalizations and plural pronouns to cloak personal attacks. For example if a poster(s) states that he thinks 'x' is a good idea, replying that "Anyone who supports 'x' is an idiot" is a personal attack.