Kaieteur News – First Lady of the Cooperative Republic of Guyana, Arya Ali, on Wednesday visited the Kingston seawall following a stakeholders’ meeting which was convened to discuss the development of the area into a tourist hub. 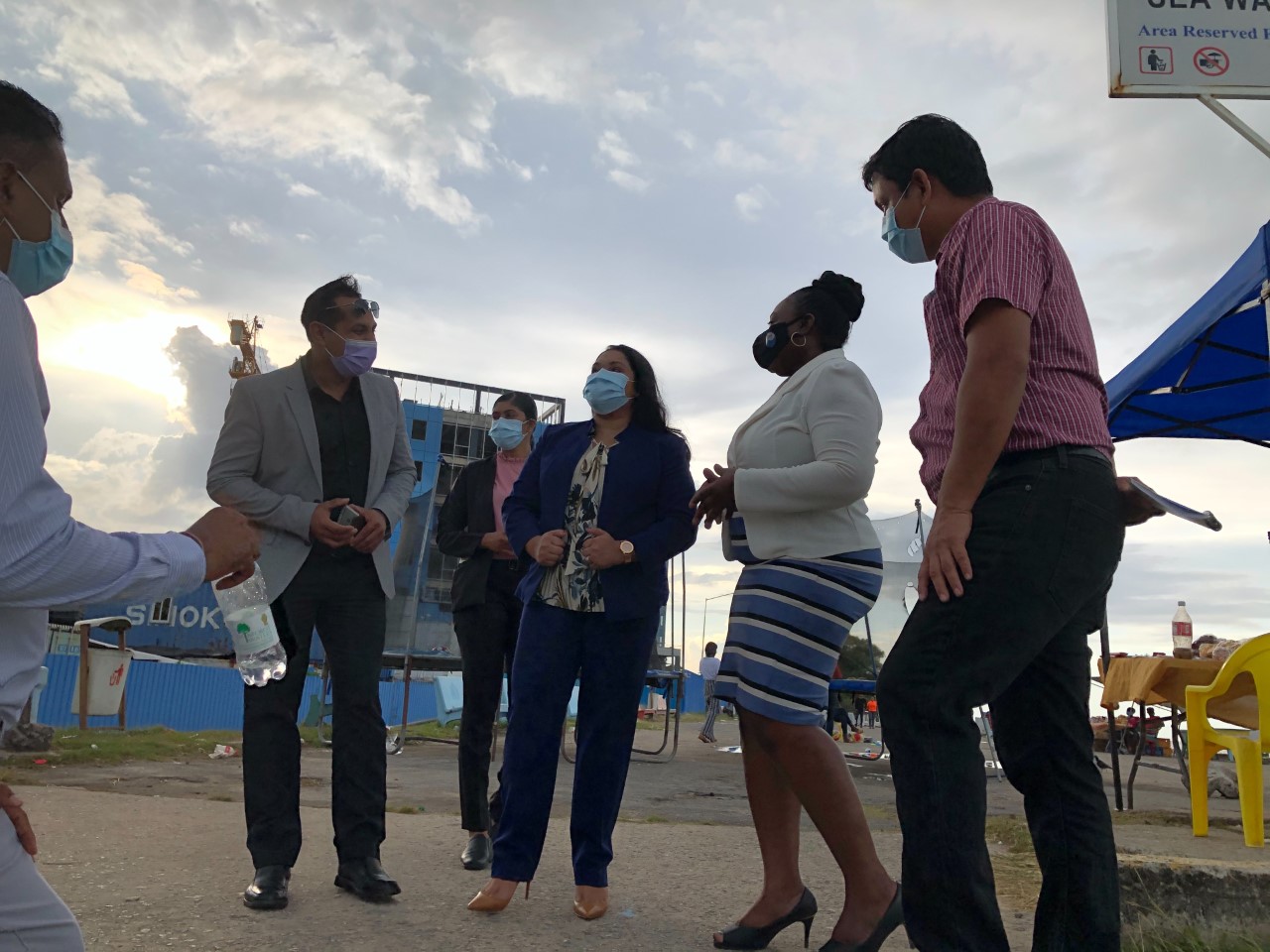 First Lady Arya Ali and stakeholders during a visit to the seawall area, Kingston, on Wednesday

The visit was conducted immediately after the meeting to identify sections of the seawall that need immediate restorative works.

The meeting, which was hosted at the Ministry of Tourism’s South Road office, was also attended by: Minister of Tourism, Industry and Commerce, Oneidge Walrond; Minister of Public Works, Bishop Juan Edghill; Minister of Human Services and Social Security, Dr. Vindhya Persaud; and other stakeholders including the Guyana Water Incorporated (GWI) local non-governmental organisation (NGO) Seawalls and Beyond, and the private sector.

The development of the seawall, stretching from Kingston to Vlissengen Road, forms part of the First Lady’s National Beautification Project. 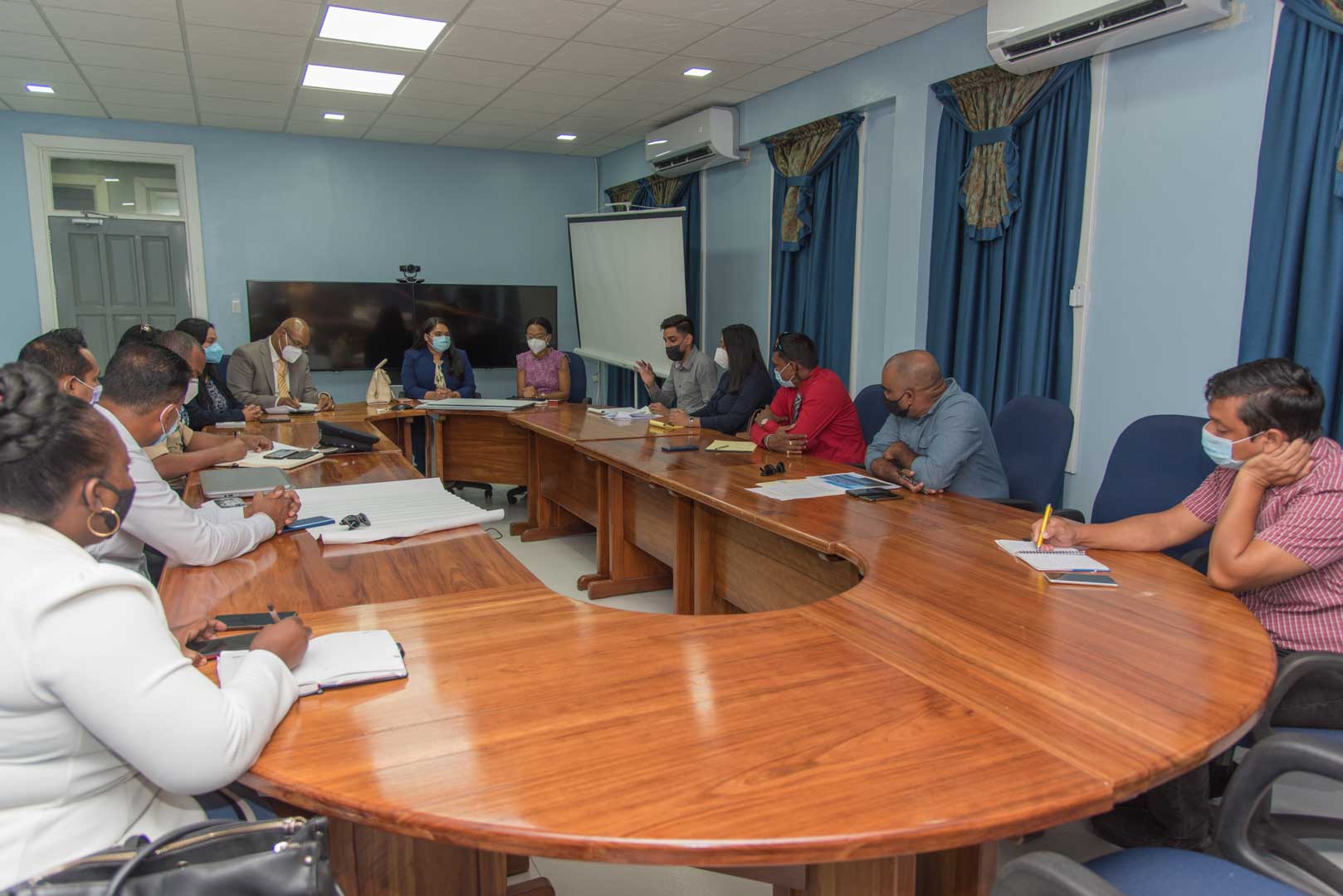 The meeting of the stakeholders on Wednesday.

After providing an overview of the project, the First Lady identified several issues that require urgent intervention. These include: vagrancy, improved lighting, improved solid waste collection, increased security, washroom and solid waste disposal facilities, a freshwater source, and regularization of vending, a statement of the Office of the First Lady disclosed yesterday.

Once these issues are addressed, phase two of the project will involve landscaping of the area, restorative works to the Police Bandstand, and repainting of the seawall itself.

“The idea of the project is to develop the area in such a way that it safeguards the scenic qualities of Guyana, promote sustainability, and build the country’s tourism capacity,” the First Lady said.

Minister of Public Works, Bishop Juan Edghill expressed how pleased he was to learn of the First Lady’s ambitious plan to embark on a project of this magnitude.

With the Public Works Ministry having responsibility for the management of the seawall, the Minister outlined several ongoing efforts to improve the condition of the area.

Additionally, Minister Edghill committed financial resources to the project, and immediately instructed his team from the Ministry to begin installing lights and cleaning the area.

Minister of Human Services and Social Security, Dr. Vindhya Persaud addressed the issue of vagrancy, highlighting that the issue is much more complex than it seems.

She noted that while many of the vagrants suffer from mental health problems, others are drug and substance abusers and so any attempt at institutionalizing them would require consent and a collaborative approach by her Ministry and the Ministry of Public Health.

The Minster added too, that the Human Services Ministry has already taken steps to reduce the number of vagrants on the streets, and will increase its efforts in the coming months.

Regarding solid waste management, a commitment was made by the private sector to supply more bins around the area, while Director of Solid Waste at the Georgetown Mayor and City Council (M&CC), Walter Narine committed to ensuring that waste is collected on a daily basis.

Meanwhile, Tourism Minister, Oneidge Walrond expressed her support for the project and committed to offering technical and other support to realize its objectives.

She was keen to note that the Tourism Ministry will aggressively pursue tourism development in Guyana as the country prepares for economic transformation, which will lead to an influx of tourists.

As such, she said the Tourism Ministry will offer its resources to support any idea that will support the government development agenda.

The seawall is a popular Sunday hangout for families, with hotdogs, popcorn, games, and a slew of activities all happening.

However, the pandemic has seen a reduction of activities.

Time to go home.  Where are the migrants? I assume they are hiding from the Covid-19 virus.  It's safer in Guyana.

eh heh...people would come from all over the universe to sit on the seawall and eat sal fish an bake.  This is in a country that last year was voted #1 in the world for ecotourism. Guyana is truly in the hands of geniuses!

Guyana is great. Guyana is beautiful.  I say to all those people who are treated unfairly in North America, it's time to come home. Come all ye faithful, there is a place for you back home.

Guyana is great. Guyana is beautiful.  I say to all those people who are treated unfairly in North America, it's time to come home. Come all ye faithful, there is a place for you back home.

shanazb replied:
Hi how is every one? just checking in been busy with life .

Totaram replied:
Are they accepting Haitians over there?
cain replied:
You lucky you're not on there, I hear it's really muddy. Django and the rest of us here owe Ray a debt of gratitude for taking that...

Khemraj Ramjattan speaks on the recent detention and deportation of Hatians who had traveled to Guyana.
2 minutes ago