Guyanese cyclist Scott Savory, who resides in USA, came up big on Saturday last when he won the Century Road Club Association (CRCA) Grant’s Tomb Criterium Men’s Category 1/2/3 in New York, NY in a time of 56:35:00. 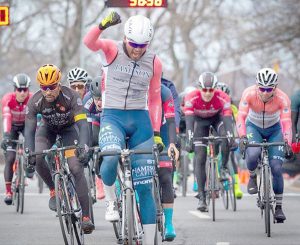 Riding for CRCA/Jamison Cannondale Racing Team in the event which served as the New York State Criterium Championship, Savory took the gold medal ahead of Connor Sallee (UCI CT: Cyclus Sports) and Stalin Quiterio Cuello (CRCA/Dave Jordan Racing) in that order.
A total of 64 cyclists completed the event, while 25 failed to do so. In sharing his thoughts after the win, Savory informed that his mindset prior to the event was that it’s generally favours a breakaway and this year there was more on the line than at the NY State Championships.
”I wasn’t worried as I knew that I and my team (CRCA/Jamison Cannondale) have been training well and we had good options for either scenario of a break or bunch finish. The race was fast and hard, we had teammates in every move and being present.”
Savory noted that during the race he conserved energy and played his cards correctly as the race reached the critical final stages. 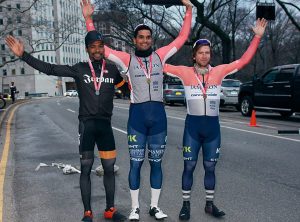 ”I was still way back coming into the last corner but I knew the headwind and uphill would make most who went early, fade. I had some ground to make up and went a tad early myself but in the end it worked out perfectly.”
On crossing the finish line, Savory shared his feelings: “I was so excited I yelled so loudly I lost my voice. I went so deep that as soon as I passed the line I made the left turn and immediately stopped and sat down, I felt as though I would pass out. I sat there and was in disbelief, it’s a race I had struggled to win or even finish for years and today (Saturday) was that day that it finally happened.”
He also shared that his team would be boosted by the win as they have an amazing squad of diverse talents and for this year, even more exciting additions.
”Everyone knows each other so well that racing happens naturally for us and that’s one of the hardest things to have within teams.”

Sign In To Reply
Post
Current Visitors: 124 (3 members, 121 guests)
Welcome to the Original Guyanese Discussion Forums, first established in 1996. Here you can discuss, ask questions or generally debate anything related to politics, movies, music, health or just gyaff away your day/night here. A note of warning, the Political forum is not for the faint of heart.  We do have some rules, so please adhere to them .
Do not post any messages that are obscene, vulgar, sexually-orientated, racist, hateful, threatening, or that otherwise violate any laws. Do not post any messages that harass, insult (name calling), belittle, threaten or mock other members.

seignet replied:
Nawabs, Modi will deal wid dem.
CJ throws out one election petition, the other to proceed
29 minutes ago