Through their Hero line of motorcycles, Rose Ramdehol Auto Sales has thrown its support behind Petra’s third annual Futsal tournament which kicks off Saturday at the National Gymnasium. Rose Ramdehol will be providing two Hero Dawn (150cc) motorcycles which will be presented to the MVP of the tournament and one lucky fan. 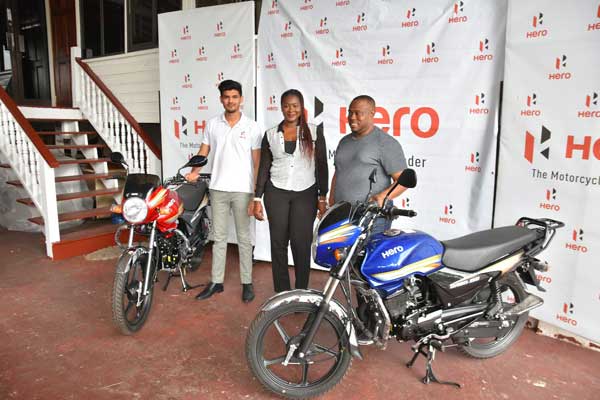 Co-director of Petra Organisation, Troy Mendonca, posited during a presentation at Rose Ramdehol’s South Road business location that, “I am happy that we have the opportunity to reward the best player in our tournament and a lucky spectator with something tangible. We at Petra are very happy that the management and staff of this company saw it fit to sponsor this initiative which has seen quite a few players honing their skills, while gaining an income.”
“Hero and Rose Ramdehol are very happy to be part of the Petra Futsal Cup. Hero globally pushes a lot in terms of sport and community development.  And it’s very important to Rose Ramdehol that hero is a part of sport in Guyana,” posited Marketing Director of the company, Joshua Ramdehol.
The fixtures for the lucrative third annual Petra Futsal tournament, which is being sponsored by Corona Beer and Namilco, have been released with play round-robin play scheduled to commence Saturday at the National Gymnasium from 19:00hr with six, very much anticipated matchups.
The feature match on Saturday is a mouth watering encounter between Sparta Boss and Tiger Bay. The tournament will dole out in excess of two million dollars in cash and prizes. The winners receive $600,000, runners-up $300,000 and third place $150,000.
The top two teams in each group along with the best four third place finishers will advance to the knockout round.
Meanwhile, an incentive for teams in the group stage, the top finishers will get an additional $40,000, second place $30,000, third place $20,000 and fourth place $10,000.
In addition, the tournament is giving away one motorbike each to the MVP of the tournament and a lucky patron.
See below the fixtures of the tournament. (Calvin Chapman)

Sign In To Reply
Post
Current Visitors: 79 (5 members, 74 guests)
Welcome to the Original Guyanese Discussion Forums, first established in 1996. Here you can discuss, ask questions or generally debate anything related to politics, movies, music, health or just gyaff away your day/night here. A note of warning, the Political forum is not for the faint of heart.  We do have some rules, so please adhere to them .
Do not post any messages that are obscene, vulgar, sexually-orientated, racist, hateful, threatening, or that otherwise violate any laws. Do not post any messages that harass, insult (name calling), belittle, threaten or mock other members.

Join Now
shallyv replied:
When was there ever an India, Mits, before the British? Don't think of me as an Anglophile, please!
shallyv replied:
Anus is right! Remove him and put a more sensible PPP thief in the position! Fing petty larcenist! Typical PNC moron!
Mitwah replied:
Rama would like to be the first Governor General.