Former Member
As soon as Robert Badal begins preaching about all that is wrong in the local business sector and of course 'corruption' this is the material that will meet him:

1. First, Mr. Robert Badal has rescinded a sale that occurred in 2007 between Guyana Stockfeeds Inc. [GSI] and El Dorado Restaurant Inc. over the assets/franchise known as Popeye’s. While GSI is now left with a capital loss as a result of the rescission, Mr. Badal is reported to have subsequently sold the Popeyes franchise for a profit of well over 100% of the value contracted by GSI (now rescinded). Mr. Badal stated in his report that the reason for the rescission is non-payment. However, NICIL can clearly show that GSI has had sufficient operating cash flows to pay this debt. Further, Mr. Badal operates as the majority shareholder, Chairman and CEO of both GSI and El. Dorado Restaurants Inc.

2. Second, Mr. Badal some time ago created a company in Trinidad and named the company by the same name as the Guyana counterpart, Guyana Stockfeeds Limited. However, this Trinidadian company is solely owned by Mr. Badal and is not a subsidiary of Guyana’s GSI. Mr. Badal uses this offshore company to procure goods and services (to the tune of G$932 M in 2010) and additionally causes GSI to pay this company G$30 M per annum as management fees. GSI (Guyana) does business in Caricom and the fact that Mr. Badal has formed another company with himself as sole shareholder is inimical to the best interests of GSI, more particularly the minority shareholders. NICIL finds no justification why the name of Guyana Stockfeeds Ltd should be used by Mr. Badal in Trinidad and finds that the CEO, Mr. Badal, to be in breach of his fiduciary responsibilities to act in the best interest of the GSI shareholders. Further, NICIL believes that there is no justification for the Trinidad company to procure any goods or services on behalf of GSI or conduct business for GSI, and believe that this is nothing more than a transfer of value from GSI to GSL.
11/2/113:18 PM
💯 0❤️ 0😂 0🎉 0🙏 0🤔 0😀 0😹 0👍 0👎 0☝️ 0👏 0😻 0👀 0👿 0😢 0🤪 0🤣 0✅ 0🙄 0🤷 0🔥 0🏆 0📈 0🤯 0
Original Post
Add Reaction
💯❤️😂🎉🙏🤔😀😹👍👎☝️👏😻👀👿😢🤪🤣✅🙄🤷🔥🏆📈🤯
Former Member
Dismissed without explanation -Pegasus workers say

Three employees of the Pegasus Hotel who were told not to return to work more than a week ago without any formal communication from the hotel’s management have expressed concern about the termination of their services and benefits due to them.

Yesterday, Ceyon Boyce, Otis James and Whitfield Archer told Stabroek News that there was a lack of information from management and no one within the hotel seemed to know why they were told not to return to work. The men, who were poolside waiters, yesterday accused owner of the hotel Robert Badal of behaving in a dictatorial manner concerning their services. They also said that over the past three months several other workers have been dismissed without any explanation.

Stabroek News tried to make contact with Badal but was told that he was in a meeting. When contacted Andrea Persaud, Human Resources Officer at the hotel, said she was unaware of the full circumstances of the situation since she was just back from annual leave. However, she disclosed that the hotel was in talks with officials from the Ministry of Labour and was currently designing a severance package for the workers.
The workers were adamant that they had done nothing wrong and if the hotel wanted to terminate their services they should have been given formal notice and the benefits due to them.

Boyce, who has worked at the hotel for the past five years, said that he had no prior problems with the hotel’s management. However, on September 18, he said, he was told to go home by the poolside department manager Arvin Kalian. He claimed that he was escorted out by a security officer, who told him that he had to declare the amount of money he had on his person— the first time he was asked to do so. He said that when he enquired as why he had to leave, an internal security officer reportedly told him that Badal said he had to go home. He said he has not heard from management since then although he has made several attempts to determine his employment status. “I didn’t do anything wrong,” he maintained.

Meanwhile, James, who has been with the hotel for the past year and Archer, who has been employed there for the past 17 years, said their problems began in the wee morning hours of September 18, as they were about to leave work. As they made their way through the security check-points where their bags and persons are subject to examination, James said that he noticed a man there whom he had never seen before. The man, who did not have a security badge, allegedly said, ‘Y’all must declare y’all money to me.’ James added that he asked why, since it was not customary for them to declare their personal money.

Further, he said that to verify whether this was new procedure, he telephoned Kalian and enquired whether there was anyone checking cash at the security booth. Kalian told him no and he made a further check with the duty manager who was in charge at the time, and he too said that no one had been given that authority. As such, he and Archer left without declaring their money. The next day, they reported for duty and Kalian subsequently informed them that they had to leave and come back another day to speak to Badal. When he asked why, he was told that it resulted from his refusal to allow the man to check his money.

While they did return to see Badal, they were unable to do so and were informed by Kalian that they needed to write and submit a statement of what happened. This was done and submitted but since then they have not heard anything from the company. James said that he has called repeatedly but is no closer to understanding what is going on.

They also claimed that Badal is trying to get rid of the union at the hotel and said that he has reportedly offered the staff association $1,000 for each staff member that signs out of the union agreement. James said that while some members have signed the forms, others have held out since they see the need for the union. 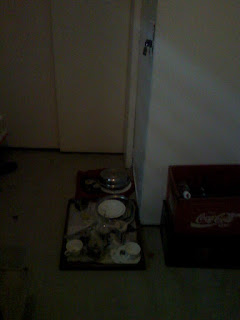 quote:
Originally posted by The Judge:

quote:
Originally posted by baseman:
Mr Badal is one of the big Guyanese businessmen who did not join up with the PPP crooks to fleece the nation's assets. He has built and conducted business profesionally and kept out of the limelight. He owes the PPP no favours and had an objective evaluation of the political landscape and decided to throw his weight behind the AFC. Now you all jumping on a smeer campaign. My questions, how come these were not brought up and labour and other issues earlier? Is this what you guys have been boing for the past few years, stalking and gathering info to use against people when necessary? Instead you should have been stalking the villages for child molestors, rapists, gangs and drug dealers. Oh, I forgot, those big drug lords and shady cronies are part of your clique.

Sign In To Reply
Post
Current Visitors: 82 (5 members, 77 guests)
Welcome to the Original Guyanese Discussion Forums, first established in 1996. Here you can discuss, ask questions or generally debate anything related to politics, movies, music, health or just gyaff away your day/night here. A note of warning, the Political forum is not for the faint of heart.  We do have some rules, so please adhere to them.
Privacy Statement - Rules
Join Now
With 389 boxes counted already, APNU/AFC is leading the PPP/C by 29,571 votes. There are 490 boxes left to be counted. According to the...
9 minutes ago
This was the rally in Whim...and Moses get 6 votes...
42 minutes ago

Has the recount shown an increase in votes for the winner. APNU. Asking for your help.
1 hour ago