When a man lie to a woman too often, de woman does get suspicious over anything he do. Is de same ting with de guvment. Dem lie to de people so often dat de people nah trust dem. If dem fart de people does think is a explosion.

Dem tell so much lies dat anything dem do, de people get suspicious.

Yesterday, dem announce a new Chief-of-Staff of de army. Fuss was Best, then was West. Now is Bess.

But dem boys wan tell them dat duh can’t happen. And nuttin like dat is going to happen.

Soulja Bai or ‘Rig-adier’, as he is now being called, gat to fight all de media houses, dem foreign countries and sure as day will get sanctions from CARI-Gone, Cum-on-Wealth, and de rest of de world including de A, B,C, D and F to U countries, including de EU.

De man wha dem pick fuh become de Chief-of-Staff is a professional soulja. He is a good man who gun ensure dat de army stay under civilian rule and na do anything that is illegal and unlawful.

Dem boys ain’t know wheh he seat deh. It no longer deh in de Office of de President. And dem boys nah sure whether ‘Riga-dier’ gun gun give he a seat in de National Assembly.

Is de Commission dat gat to declare de results and he gat to accept what declare just like he used to seh he would do. But dem boys believe he now talking in he sleep.

Talk half and wait fuh see if ‘Rigadier’ was fooling de people when dem tek out de picture of he praying.

President David Granger granted approval to Chief of Staff of the Guyana Defence Force (GDF), Brigadier Patrick West to head on accumulated leave with effect from Wednesday, appointing Colonel Godfrey Bess to perform the functions of Chief of Staff. 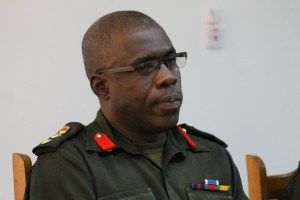 Brigadier West, 54, served as the country’s 10th Chief of Staff. He expressed gratitude to President Granger and the Defence Board for both “specific and general direction” which he said has helped to shape the course of effective transformation within the Force, while at the same time developing the concept of Total National Defence.

The Commander-in-Chief of the Armed Forces extended best wishes to Brigadier West for his service as an officer in the Defence Force since 1985.

“I am certain that the momentum of the Force at this stage can see the seeds of transformation which were sown coming to fruition in another few years”, he said as he thanked his predecessors for their efforts. 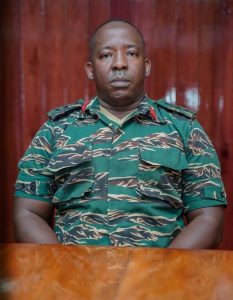 “I think Colonel Bess will have a very good foundation going forward,” Brigadier West said while describing his time in the military as “very good.”

Brigadier West is the recipient of the Military Service Star, Military Efficiency Medal, and the Border Defence Medal, among others.

Meanwhile, 51-year old Colonel Godfrey Bess said it is an honour to have been bestowed with the privilege of serving as Chief of Staff of the Defence Force. He thanked President Granger and the Defence Board for the opportunity to serve while Brigadier West proceeds on his accumulated leave.

Colonel Bess also thanked Brigadier West whom he has worked with over the last three years on what he termed the consolidation and stabilisation period of the GDF.

“Brigadier West’s leadership has been admirable. I have learnt a lot from him. The vision is clear and indeed what I need to do with my team is follow the vision,” Colonel Bess said noting that “the path is clear and I will follow that path.”

Colonel Bess who started his military career in 1990 served in Command, Administrative, Staff and Training appointments throughout the GDF. He said his professional education was supported by the compulsory professional military education of the Guyana Defence Force which includes the Senior and Junior Command and Staff Courses and Managing Security in Wider Defence Context.

Colonel Bess’ has been serving as Quarter Master General since January 1, 2018 and has been responsible for ensuring that the GDF is well resourced to carry out its mandate in any terrain.

Colonel Bess is the holder of a Bachelor of Social Science Degree in Business Management and Level Two Association of Chartered Certified Accountants.

Please don't let a member moderate the moderator for posting and sharing anti-PNC sentiments. Thank you.

Sign In To Reply
Post
Current Visitors: 198 (2 members, 196 guests)
Welcome to the Original Guyanese Discussion Forums, first established in 1996. Here you can discuss, ask questions or generally debate anything related to politics, movies, music, health or just gyaff away your day/night here. A note of warning, the Political forum is not for the faint of heart.  We do have some rules, so please adhere to them .
Do not post any messages that are obscene, vulgar, sexually-orientated, racist, hateful, threatening, or that otherwise violate any laws. Do not post any messages that harass, insult (name calling), belittle, threaten or mock other members.

Ramakant-P replied:
OK!
Athena replied:
Na, you're the starboy. Just do your thing, don't bother with them.
Not a Sermon only a Thought
27 minutes ago