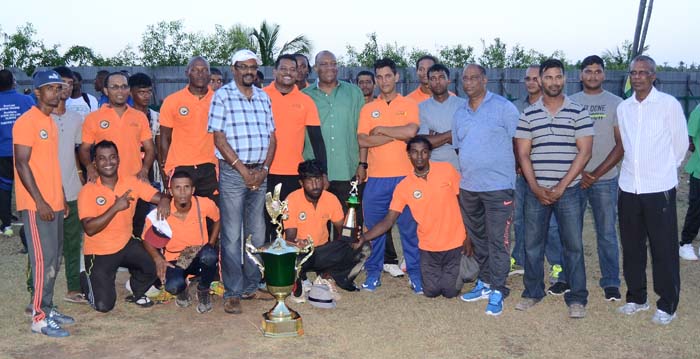 The Grill Master team poses with Minister Joseph Harmon and sponsors of the Tournament.

Playing in front of a massive and colourful crowd at the Area ‘H’ ground, Grill Master of Canje crushed Prophecy Boys of Port Mourant by 131 runs to take home the first prize of $500,000 and the beautiful Green Economy Trophy donated by Kares Engineering Inc., and the Ministry of the Presidency, respectively.
The tournament was organised by the Rose Hall Town Youth & Sports Club, MS, in honour of its Patron on his 72nd birthday and was geared towards educating the public about the effects of Climate Change whilst promoting the Green Economy Programme.
Play was delayed by one hour due to heavy overnight rain but once play started, it was a day of nonstop action with a high level of discipline. In the semifinals, Grill Master easily disposed of Jai Hind of Albion by 9 wickets while Prophecy Boys defeated Hard Knock of Manchester by 79 runs.
Batting in the first semifinal, Jai Hind Cricket Club was restricted to 68 for 9 off their allotted 10-overs while the eventual champion replied with 70 for 1 from 6-overs. Vishal Phillips top scored with 45 which included five huge sixes.
Prophecy Boys blasted themselves 140 for 5 off their 10-overs versus Hard Knock, A. Marimuthu led with 55 while Mavindranauth Ramnauth supported with an impressive 44. Bowling for Hard Knock, Shane Cameron claimed 3 for 12 from his two overs.
Hard Knock in response were bowled out for 61 off 8.3 overs, losing by 79 runs. Jason Glasgow was the only batsman to offer any resistance to the Prophecy Boys bowlers. Madhan Budhram and Davendra Itwaru both claimed 3 wickets for 12 and 17 runs, respectively.
In the third place playoff, Hard Knock defeated Jai Hind by 17 runs. Batting first after losing the toss, Hard Knock was indebted to Jason Glasgow 34, Delroy George 27 and Eldeen Mendonca 21 as they blasted their team to 141 for 4 off their allotted 12-0vers. Ishwar Harilall took 2 for 21 for Jai Hind.
Needing to score 142 to claim the $100,000 third place prize, Jai Hind was restricted to 124 for 9 as Hard Knock fielded and bowled well. Adrian Singh led the way with 30 while Ishwar Harilall and Joshua Rangasammy supported with 21 runs, apiece. R. Ross took 3 for 31 runs to lead the Hard Knock bowling.
The Final was a T20 affair and the large crowd was surprised when Prophecy Boys won the toss and surprisingly opted to field first. The powerful Grill Master batting line up took full advantage of batting first and blasted their way to an impressive 271 for 6; skipper Roy Jaferally top scoring with 65 (7×6) while David Looknauth 55, Vishal Phillips 48 and Kevin Gangaram 34 not out offered vital support.
Arjune Marimootoo was the only bowler to escape with decent bowling figures, 4 for 32 from 4-overs. Prophecy Boys in return disappointed their supporters as they were dismissed for 141 in 16.3-overs. Michael Romalho 38, Madhan Budhan 28 and Navindranauth Ramnauth 20 were the principal scorers as Roy Jaferally completed a fine all round performance with 4 for 27 while Keon Sinclair took 2 for 21.
At the presentation ceremony RHTYSC Secretary/CEO Hilbert Foster described the tournament as a massive success and a perfect tribute to President David Granger on his 72nd Birthday. The Rose Hall Town Youth & Sports Club, he stated worked overtime to organise a tournament of the highest standard and praised the numerous sponsors especially Radesh Rameshwar of Kares Engineering, Mahadeo Panchu of KSM Investment, Brian Tiwari of B.K. International, Sharaz Sheriffudeen of V Net Communication, S. Jagmohan Construction, Peter Lewis of Associated Construction, Fyuse Hussain, Annirud Ramcharitar and Bakewell among others for their support. Minister of State, Joseph Harmon who represented President David Granger congratulated the club for honouring its Patron with a well organised event.
The Minister also spoke broadly on the impact of Climate Change and the reasons why the Government was striving to establish a Green Economy. Minister Harmon urged the club to maintain its outstanding work and committed the Government to assisting with programmes associated with Climate Change.
Panchu and Kishore Persaud of Kares Engineering spoke of being proud to be associated with the Patron’s Green Economy tournament. Both pledged their Companies’ assistance in the future to the club as they were highly impressed by its work and organising skills.
The winning team apart from the $500 000.00 first prize collected $105,000 from Peter Lewis for boundaries struck during their innings while Roy Jaferally took home $50,000 for being man-of-the-finals.
Prophecy Boys received $300,000 and trophy for the 2nd prize, Hard Knock took home $100,000 and a trophy while Jai Hind pocketed $50,000 for the 4th prize. The tournament, Foster proudly stated was the biggest of its kind for any sport in the Ancient County and expressed gratitude to the media and fans for their support.

lil boy replied:
So you are sating that there is no one there because this from did not nominate anyone? You think that they will listen to anyone here?
Vish M replied:
This forum is yet to nominate anyone No wonder the vacancy is still open

Athena replied:
They gave Odeen a tough time with his pension benefits and I'm not sure if he ever he got them. Oye Mits, where's Churchill?
lil boy replied:
Dr. Odeen Ishmael is/was a man as man of integrity. He carried out his duties with honesty and diligence of every Guyanese can be proud.
Proposed Guyana NY Consulate General
5 minutes ago

Addressing objections to a Federalised Guyana
6 hours ago
Former Ministers Patterson and Ferguson received over $6.7M in gifts from Harbour Bridge, other agencies
7 hours ago