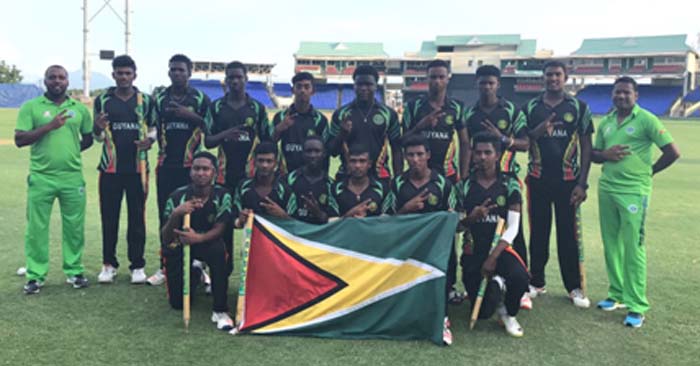 The victorious Guyana U-19s after winning the Regional 50-over U-19 tournament in St Kitts & Nevis yesterday.

Guyana yesterday achieved the ‘double’ when they beat the Windward Islands by six runs in the final round of the Regional 50-over U-19 tournament in St Kitts & Nevis to take the 2017 Championship after dethroning the Leeward Islands in the three-day format which began in 1976, to capture their 15th title.
The 50-overs tournament was inaugurated in 1998 in T&T as a replacement for the washed out three-day competition and this was Guyana’s fourth 50-overs title in a row since they dethroned 2013 champs, Windwards in 2014 at home when their 50-over Championship winning streak began under Skipper Brian Sattaur.
Sattaur became the first Guyana Captain to win both three-day and one-day titles in the same year and is now joined by this year’s skipper Renaldo Ali Mohammed as they both bettered Steven Jacobs, who led Guyana to the three-day title in 2007 in St. Kitts before losing to Jamaica in the 50-over final at Warner Park the same year.
At Warner Park, Guyana was spearheaded by a 91-run opening stand between the tournament’s leading run scorer Raymond Perez (77) and Joshua Persaud (40) as they were dismissed off the last ball of their 50 overs for 217.
Dillon Douglas (3-32), Jahseon Alexander (2-24) and Alick Athanaze (2-43) were the main wicket takers for the Windwards, bowled out for 211 in 49.4 overs despite a 99-run second wicket stand between Wayne Edwards (43) and Emmanuel Stewart (40).
Off-spinner Richie Looknauth (3-31) and West Indies U-19 all-rounder Baskar Yadram continued to impress with the ball by taking 2-35 opening the bowling. Perez’ fine form continued with his well calculated innings while Persaud dominated the opening partnership before he fell to Douglas after facing 55 balls and reaching the boundary six times.
Douglas struck twice in the space of 14 runs when he removed Yadram (12) and Kevin Sinclair (8) and when Ali Mohammed was run out for two, Guyana had slipped to 124-4 in 30.2 overs.
Jahseon Alexander removed Perez, who faced 117 balls with four fours and a six at 153-4 after the flamboyant DCC right-hander and Ramnarine Chetura (19) had added 32. Alexander struck again when he got rid of Kelvin Anderson (1) at 156-6.
Javid Karim hit a cameo 25 with two fours while Looknauth weighed in with a quick 13 to get their team past 200. When the Islanders began their chase on another day blessed with glorious sunshine, St Lucian Kimani Melius (14) who scored over 400 runs in the three-day format, was taken by Sinclair off Yadram at 18-1.
But after second wicket revival from Edwards and Stewart only Athanaze (25) and Daneal Dupigny (23) offered resistance as the 2013 one-day Champions pushed the game into the final over.
Meanwhile, in the other games yesterday Trinidad and Tobago trounced Jamaica by six wickets to finish second while Barbados got the better of the Leeward Islands by five wickets.

Sign In To Reply
Post
Manage Topic
Welcome to the Original Guyanese Discussion Forums, first established in 1996. Here you can discuss, ask questions or generally debate anything related to politics, movies, music, health or just gyaff away your day/night here. A note of warning, the Political forum is not for the faint of heart.  We do have some rules, so please adhere to them.
Join Now
Coronavirus now poses “very high” risk at global level -WHO
Speed limit on Linden Highway cut because of soil erosion
Trinidad born rap­per Nic­ki Mi­naj makes donation to St Jude’s Home for Girls
Jamaica: Slain former Reggae Boy hailed
Jamaican security guard kills wife in Trinidad
Jamaica: Woman gets heart attack after being told house will be demolished
Jamaica: Vendors using obeah to get sales
Jamaica: 10 year-old boy found after running away from home for 20th time
Current Visitors: 113 (18 members, 95 guests)

Shut yuh poke. Me live deh and like them. Dem does shit pon road side, true. But Dem don’t eat snake and bat and give Coronavirus. All...
13 minutes ago

Krulie can only sell pera
9 minutes ago

Alyuh hear me
24 minutes ago