Team Coco’s Hamza Eastman has continued his excellent form at the start of the 2018 season with another clinical finish and successful defence of his R&R International Ltd. 46-mile Road Race title yesterday on the West Demerara. 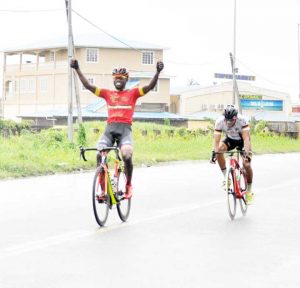 Back to Back Winner! Hamza Eastman lifts his hands in triumph as he approaches the line yesterday.

Braving drenching rain and heavy winds, Eastman rallied to add the road race title following his triumph in the feature event on Saturday in the National Park. His winning time yesterday of 1:43:14 was a bit slower than last year’s time of 1:31:26 but that is understood given the challenges of the rain and winds.
Some of the riders didn’t stay the course given the challenging weather during the race which pedaled off from the Harbour Bridge proceeded to Busy Park on the East Bank, Essequibo before returning to the place of origin.
Eastman, who won 3 sprint prizes outdueled Paul De Nobrega to the line in a spirited sprint with Deeraj Garbarran taking the 3rd place followed by Romello Crawford, Jamal John and Christopher Griffith in that order. De Nobrega, John and Garbarran also won a sprint prize each.
Eastman was the only rider to successfully defend his title as there were new winners in the other categories. Adealie Hodge took the junior category in a sprint home from Briton John with Ajay Motilall placing 3rd. Curtis Dey had won this category last year but has now graduated to the senior ranks.
Last year’s masters’ winner, Junior Niles had to settle for the runner-up spot this time around as he was bested by Warren ‘Forty’ Mc Kay in another sprint home. Alex Mendes took the other podium position.
Mario King is the new king of the mountain bike category, outmaneuvering Shane Bourne to the line. Monty Parris was the lone Masters Over-60 competitor. (Franklin Wilson) 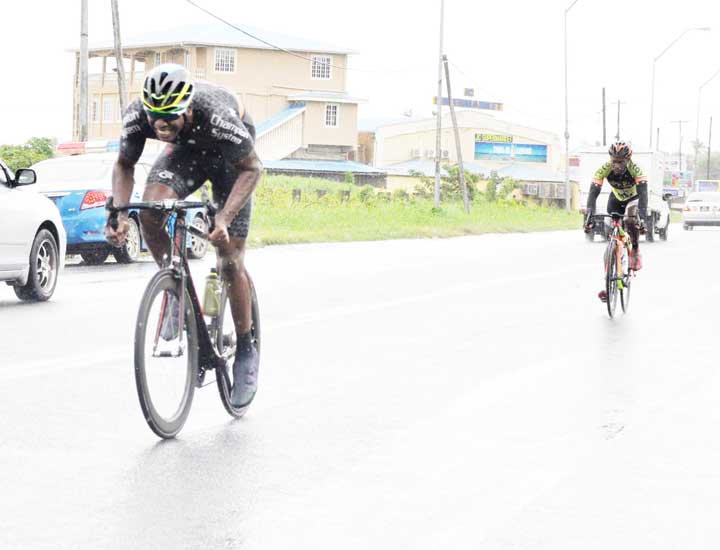 Warren McKay powers to the line leaving Junior Niles in his wake.

Sign In To Reply
Post
Current Visitors: 114 (3 members, 111 guests)
Welcome to the Original Guyanese Discussion Forums, first established in 1996. Here you can discuss, ask questions or generally debate anything related to politics, movies, music, health or just gyaff away your day/night here. A note of warning, the Political forum is not for the faint of heart.  We do have some rules, so please adhere to them .
Do not post any messages that are obscene, vulgar, sexually-orientated, racist, hateful, threatening, or that otherwise violate any laws. Do not post any messages that harass, insult (name calling), belittle, threaten or mock other members.

seignet replied:
Nawabs, Modi will deal wid dem.
CJ throws out one election petition, the other to proceed
27 minutes ago