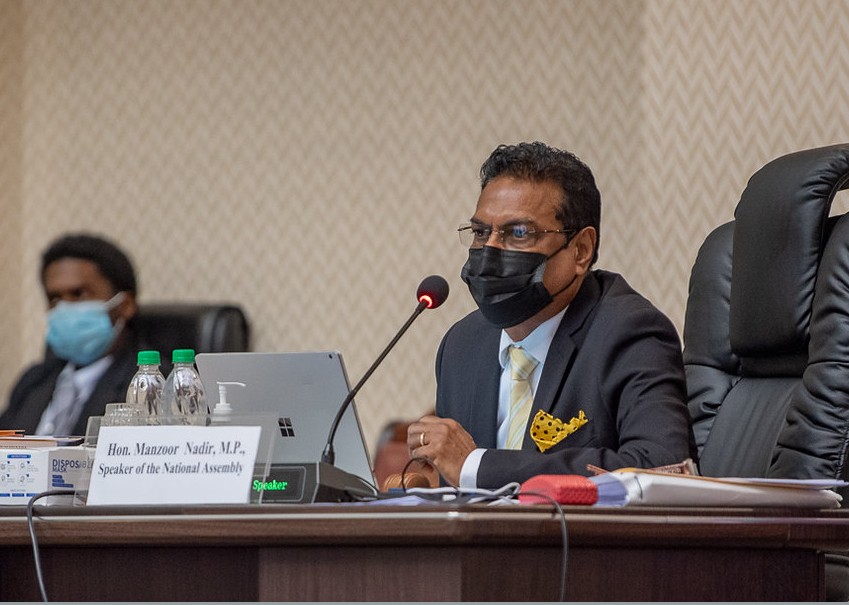 Former Speaker of the National Assembly Ralph Ramkarran has called on the current holder of the office, Manzoor Nadir to put to a stop to the vulgarity that has been in evidence among MPs during the ongoing budget debate.

Ramkarran,  in his column in today’s Sunday Stabroek, said that the Speaker had vast discretionary power to bring Parliament to heel. A two-term holder of the Office of Speaker, Ramkarran said that Parliament had become a den of misogyny, homophobia and other ills.

He defended the reporting by the press of the behaviour of MPs in recent days.

Ramkarran said: “I have read many of the articles, letters and comments concerning the behaviour of MPs during the debate on the Budget. The press is absolutely right to bring this slow descent into vulgarity into the public domain and to print in its disgusting detail what Members are saying. The press is fully and absolutely protected from any liability of any kind for their accurate reportage.

“The Speaker has a duty to stop the vulgarity and there are provisions in the Standing Orders to deal with members who violate the rules as to order by shouting across the aisle or making vulgar or otherwise offensive remarks, even while sitting. There are also the Speaker’s vast discretionary powers that are not written in any rule book but can be exercised to great effect. Parliament has to be brought to heel. It has been allowed to go to rot and has become a den of misogyny, homophobia, disparagement, denigration and rudeness. The hurling of aspersions may appear to injure the victims, but among opinion makers, they do more harm to the offenders, who must be named”.

During the first day of debate there were numerous transgressions of normative behaviour but Nadir, a former parliamentarian, did nothing to stop it. He has since been criticized by a number of commentators including former MPs, former Prime Minister Hamilton Green and Kit Nascimento.

During his 35-minute presentation last Monday at the Arthur Chung Conference Centre, Labour Minister Joseph Hamilton found time to deliver a series of attacks, one of which appeared to be homophobic.

“You must stop having that woman jump out of your body,” he appeared to tell a member on the opposition benches as he rose  to make his presentation. Later in the midst of his argument Hamilton applied descriptors to each of the Opposition members slated to speak, one member is labelled the author of corrupt land deals, another labelled “bangles, bed sheets and pillow cases”, a lady who wanted a “leaf bangle”, the man who bought “barber chairs and mirrors” and “then you will have profanity from the lady who jumps out of a man’s body regularly”. At no time was he admonished by the Speaker.

The last descriptor was welcomed by a loud cackle from a member of the government side of the House.

How the sex toy and its requisition directly related to a debate on policies was not made clear but the politician argued that his colleagues on the other side of the House were somehow responsible for its purchase.

The man is a lawless individual. Respect has respect, because it is in character. Suh, lawlessness in character will meet its own.

PNC, give him hell until the PPP fires him on some trumped up excuse.

The man is a lawless individual. Respect has respect, because it is in character. Suh, lawlessness in character will meet its own.

PNC, give him hell until the PPP fires him on some trumped up excuse.

It wasn't a trumped-up excuse.  He had wanted to be the Presidential candidate, just as Moses wanted it.  They didn't get it so they left because both of them thought that they were better than Jagdeo.

I think anyone opposing Jagdeo has been beaten down. Now, it is, what the hell, might as well join with him.

Join Now
cain replied:
Shelly you DIPSHIT why don't you go trip yourself up outside and fall on your mouth a few times? I'm sure your neighbours would stand...

shallyv replied:
You ignore the fact that I've already called you fisherman! Why? Mental retardation? Slow to understand? What? Angler is just a...
Django replied:
Looks like concrete .

Kapadulla Wood replied:
Agriculture has to be part of a big coordinated package. It cannot work in a bubble.
shallyv replied:
Looks sturdy! What kind of foundation? Any load limitations?
Bet on agriculture to beat resource curse — Prof. Terrence Blackman
5 minutes ago