Public servants to get salary increase but no bonus 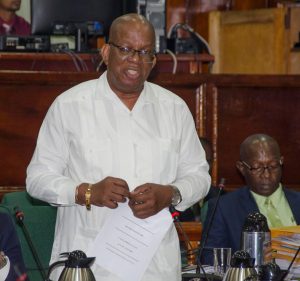 Finance Minister, Winston Jordan on Thursday announced that public servants would get an increase in salary retroactive to January, 2019 but no bonuses would be paid for a third straight year.

“While there will be no one-off end of year bonus, the retroactive salary increase will be applied to salaries for 2020 as well,” the government’s Department of Public Information (DPI) quoted Mr. Jordan as saying.

The minister did not state how much the salary increase would be, but that is almost certain to trigger criticism once again by the trade unions that the hikes would be imposed rather than negotiated by employer and employee.

Bonuses were not paid in 2017 and 2018, and the previously customary one-month salary to members of the Disciplined Services have not been paid by the David Granger-led administration since coming to power in 2015.

The salary increase announcement was made a day after the President said that he was awaiting word, from the Finance Minister, on the availability of funds to pay year-end bonuses. Mr. Granger has cited the fact that his administration is in caretaker mode since the passage of the no-confidence motion, in keeping with a decision by the Caribbean Court of Justice, and so could not go to Parliament for approval for extra  funds to pay bonuses.

Dat Banna Lewis who represents workers will staan quite cause PNC is he Mattie. They would have called for war if the PPP did this to them.

Anyway, this decision will come back to bite the PNC on their behinds.

This is stupid. Retroactive is supposed to accommodate an decision made now that should have been made earlier. It is not to accommodate a neglected action. So all through the year when people needed money to cover their electric bill, they had to figure out alternatives or live in the dark only to get all that money in December to waste on the holidays.

Love how the Granger government has also screwed the Discipline Forces since assuming office in 2015. Yet those will line up like slaves to give their votes to the PNC.

Dat Banna Lewis who represents workers will staan quite cause PNC is he Mattie. They would have called for war if the PPP did this to them.

Anyway, this decision will come back to bite the PNC on their behinds.

Lewis is a dangerous racist.

This woman predicament preceded 2015.
11 minutes ago

He was a member of GNI and I heard a little about his involvement in the free house project. They say a silent giver or builder for the...
12 minutes ago

GNI Warrier is a black guy who continue to build houses for Indians in Guyana. Its too bad he don't tell us about his projects, after...
26 minutes ago

UPDATE: Parties to comment on poll cards dumped in Arima (Trinidad)
23 minutes ago

Guyanese Female calling on Suriname President for help.
24 minutes ago

GuySuCo needs additional $1.6b up to end of year to stay afloat -Agri Minister
36 minutes ago