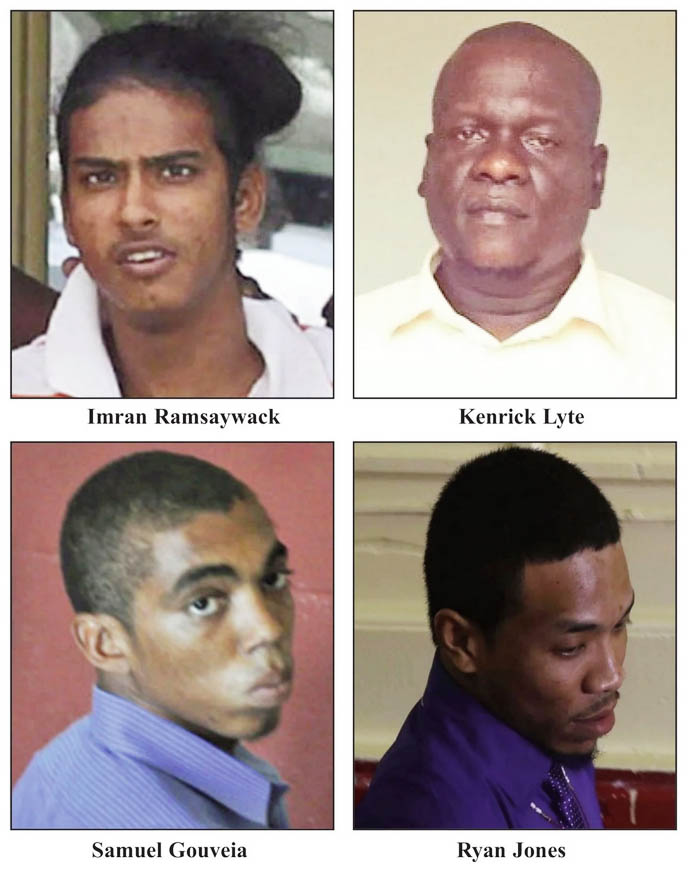 As the search continues for the four prisoners who escaped from the Mazaruni jail on Tuesday, several persons including a number of prison officers and the father of one of the escapees are currently in police custody.

Crime Chief Wendell Blanhum told Stabroek News that the father of one of the escapees has since admitted to making arrangements to transport the prisoners from Bartica to Parika via boat following their escape.

Blanhum said the man was arrested based on intelligence gathered. He will be escorted to the Criminal Investigation Department (CID) today for further questioning.

Also in custody is the captain of the boat, who transported the prisoners.

Several prison officers, who were on duty at the time of the escape were also taken into police custody as the investigation continues, Blanhum said.

Up to yesterday afternoon they had not been recaptured.

Contacted for an update yesterday, Director of Pri-sons (ag) Nicklon Elliott told Stabroek News that a support team was still searching for the escapees but  up to late yesterday afternoon there was no sign of them.

Minister of Home Affairs Robeson Benn, in an invited comment had previously said that from all indications the prisoners were aided in their flight.

In a statement issued on Tuesday, Elliott had said the prisoners were observ-ed missing at about 07:15 hours during the unlocking of the Brick Prison. The area is secured by a Duty Officer and four other ranks.

He said ranks on duty who went to unlock the prison observed that the padlock to the entrance gate had been  tampered with. This led to further checks and it was discovered that two bars in the cell had been cut.

Upon the discovery, the matter was reported to the officer in charge of the Mazaruni Prison, Senior Superintendent of Prisons (Ag), Kofi David, who immediately ordered a roll call.

On its conclusion, the prison authorities confirmed that the convicted prisoners who were housed the Brick Prison (solitary) had escaped.

Elliot had noted that a Joint Patrol was established at the outer perimeter of the prison and a search over water, air, and land has been launched by the Joint Services to recapture the four escapees.

Ramsaywack and Lyte were imprisoned following murder convictions while Gouveia and Jones were convicted for manslaughter.

Ramsaywack of Berbice was sentenced to death after being found guilty of the murder of a United States-based Buxton woman in 2015.

The charge against Ramsaywack stated that between March 25 and March 26, 2015, he murdered Samantha Benjamin.

Trial Judge Justice Sandil Kissoon at the time of sentencing had told the court that he found that the woman’s death was the result of a cold-blooded, calculated robbery that eventuated in murder.

Benjamin was a US citizen and proprietor of a boutique in the Vendor’s Mall on Water Street. In order to dispose of Benjamin’s body, Ramsaywack went to great lengths and effort to dismember her body. Her remains were found at the Annandale foreshore on March 26, 2015. Later the same day, the head, legs, and arms were found at the foreshore.

In 2019, Kyte was also sentenced to death by Justice Kissoon after being found guilty of the murder of 72-year old Osmond Fiedtkou.

Fiedtkou’s body was found on the morning of July 13, 2014, by police and a community search party about two miles from his Groete River residence (15 miles below Bartica). His shotgun, boat and engine had been taken. According to reports Fiedtkou was murdered by Lyte following an argument over money owed to the deceased.

Meanwhile, Gouveia, a resident of Plaisance, East Coast Demerara, was on trial for the murder of Santee Solomon in 2015.

It was stated that Gouveia had fatally stabbed Solomon. It was initially reported that Solomon was attacked by two men.

Jones, of Bartica, was sentenced to 28 years in prison after he pleaded guilty to the unlawful killing of Timehri mechanic, Puranand Baljit, who was stabbed to death during a robbery at his Madewini home in 2016.

In 2019, he appeared before Justice Sandil Kissoon at the High Court in Georgetown, where he pleaded guilty to manslaughter. He had initially been indicted for murdering Baljit, called ‘Andrew’, in the furtherance of a burglary on June 9, 2016.

The police have since appealed to members of the public, relatives, and friends, to give any relevant information as to the whereabouts of these escapees so that they can be captured and returned to the prison.

A further appeal was made to the escapees to surrender to the police or relevant authority, to avoid any serious confrontation that is likely to result in the use of force. All information given will be treated with a high degree of confidence and the rights of those escapees will be respected and upheld, the police assured.

Ralph Jones, the father of escapee, Rayon Jones has admitted helping his son and three others who fled the Mazaruni jail on Tuesday including providing them with a change of clothing.

A statement from the Guyana Police Force follows:

As the GPF and other members of the Joint Services continue the hunt for the four convicted prisoners who broke out of the Mazaruni Prison on Monday last, Ralph Jones the father of escapee Rayon Jones was further interrogated. He disclosed that after his son escaped from the Mazaruni Prison he contacted him by telephone sometime after 21:00 hours and informed of his actions.

Ralph Jones further admitted that sometime after 01:00 hours the following day, all four of the escapees showed up at his house where he provided each of them with a change of clothing. He in turn collected the clothes that they were wearing and dumped them in an alleyway aback his house in Fourth Avenue Bartica.

Today, Thursday February 18, 2021 police ranks went to the location disclosed where they found a white ‘salt’ bag that contained the following items: clothing, footwear, deodorant, topes, pillow and pillow-cases, along with a bottle of Red Star rub, a toothbrush and a food bowl.

Join Now
Ilum replied:
You spot on. Not so long ago when Burke and his criminal PNC cohorts wanted to steal the elections, they were moaning and groaning about...

kp replied:
I will tell Chris what a disgraceful uncle you are. Shame.
Mitwah replied:
Last night an acquaintance celebrated his 55th year since he migrated from Guyana. He said it was a blessed day when he boarded the ship...

Is this Bluffing ???
3 minutes ago