God bless and keep Prez Granger safe an healthy....enough to lead Guyana for another four years plus.

Will the  SANCTIMONIOUS GANGSTER tell us about the G$93 billion dollars they borrow from the Central Bank.(see evidence below)

That is enough cash to develop and hand over 18,600 working class houses to 18,600 Guyanese families. 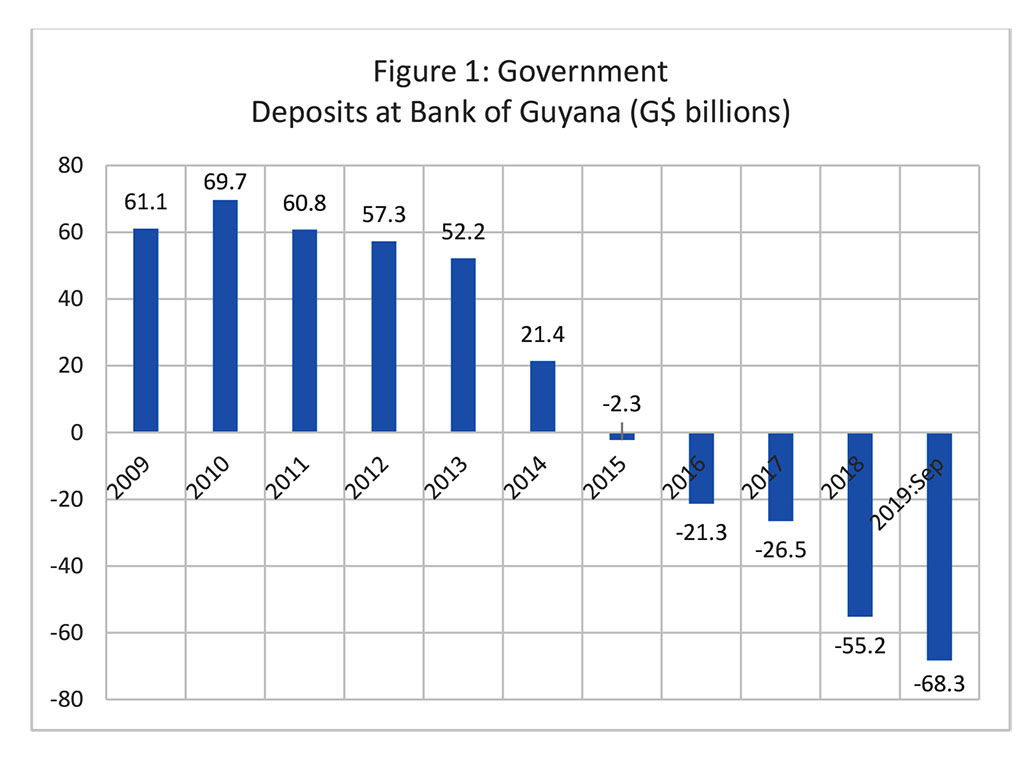 The Bank of Guyana Act makes it clear that the central bank is the government’s bank. The central bank facilitates and keeps monies for the central government and state-owned corporations. In the past, I have done several columns on the overdraft on the government’s deposit at the Bank of Guyana. The most recent column mentioning this topic is titled “Some initial conditions as first oil beckons” (SN: Sep 15, 2019). I also discussed this issue in a column titled: “Government deposits at the BoG and some MMT-like themes” (SN: June 9, 2019). The latter essay discussed some principles of monetary economics surrounding the overdraft. The Consolidated Fund has also been in overdraft persistently since 1985 until 2017 when summary account was no longer reported (SN: Dec 24, 2017). There is no reason to believe the Consolidated Fund is not in overdraft after 2017.

For starters, let us observe the state of central government deposits at the BoG over the period 2009 to September 2019. The trend in the deposit is illustrated in Figure 1. In 2009, central government held G$61.1 billion in its account at the central bank. The number reached a peak in 2010 amounting to G$69.7 billion. There is an established trend by 2012 indicating that the deposits are being drawn down. As at 2014, the number fell precipitously from the year before to G$21.4 billion – a decline of G$30.8 billion.

There has been some misinterpretation in reading the data in parts of the press and on some discussion boards. It should be noted that these are figures from a balance sheet – hence, they indicate stocks and not flows. For example, we cannot say the government “borrowed” G$26.5 billion in 2017 and borrowed another G$55.2 billion in 2018 from BoG. Instead, we have to look at the change in the overdraft between these two years to get the number for a specific year. In that case, the government expanded its overdraft by G$28.7 billion in the year 2018. Using the same principle of the change in the stock of the overdraft, the government has “borrowed” an extra G$13.1 billion as at September 2019.

I used the word borrowing loosely here. These are not classic loans or bonds that have to be repaid. These overdraft reflects monetary expansion or money financing of government spending. They do not add to the domestic debt. Where do the extra money financing of fiscal deficits end up?

Before we answer that question, we must note that these funds are used to finance current (as opposed to capital) expenditure of the government. As noted above, the government used an extra G$13.1 billion of money financing for this incomplete year, 2019. A similar rapid expansion of money financing was used in the year 2014 when Guyana was going through another political drama associated with proroguing or Parliament. In that year, central government’s deposit fell by G$30.8 billion, thereby indicating money financing of government spending of same amount. The present government is well on its way in the use of backdoor money financing, which will likely intensify as the pressure motivates the governing political class to boost spending on election goodies, on top of the G$28.7 billion in money finance it utilised in 2018.

It should be noted that the monetary financing is used to meet mainly current government expenditure, not capital projects. If structured properly, capital spending is supposed to boost the productivity of the society.  Greater productivity results in higher quality growth and provides the best opportunity to fight poverty and other social problems. As at 2018, however, the government spent G$143.7 billion on its own short-term consumption, which amounted to 21% of GDP. For the same time period, government spent less than half on productivity-enhancing projects – G$63.4 billion or just 9% of GDP.

Moreover, the net international reserves of the BoG dipped in both of these time periods. If foreign exchange reserve is falling we ought to see a decrease in excess or surplus banks reserves in domestic currency. The implication is the overdraft spending has overwhelmed the decline in bank reserves due to the fall in international reserves from 2014 to 2015 and 2017 to 2018.

Some observers might be tempted to use the overdraft as a reason to blame political foes. However. This monetary system was developed for an independent country with its own national currency. It was designed to provide the government with some policy space or wiggle room to meet expenditure without excessive belt tightening, which often has adverse social impact on the most vulnerable. A similar arrangement exists in other parts of the world. As a matter of fact, I published a book in 2014 exploring how this mechanism is related to the exchange rate in emerging market and developing economies.

In the case of Guyana, the overdraft is not being spent on matters of national importance. Indeed, my column of September 15 indicates that the public service has increased substantially in recent years. At the same time, businesses and citizens are not being served well by the larger civil service. It is still difficult to get birth certificates or permits to build a house, and blackouts are pervasive.

What is the consequence of the expansion of money to finance government spending? The textbooks would tell you that inflation will result. However, this is not always the case. In the case of Guyana, the adjustment from money “printing” is capital flight and depreciation of the exchange rate. Several reasons were proposed to explain the declining value of the Guyana dollar in the recent past since 2016. These include Mr. Jagdeo as a saboteur, Cubans and others taking out US notes, the unwinding of the supposed narco-economy, among others. However, I maintain that the main determinant is the expansion of monetary financing, which creates excess money balances that must find a home – usually in foreign currency assets.

It is for this very reason the Bank of Guyana sells Treasury bills as a compensating tool to private and even public economic actors. The idea is not merely to mop up excess reserves from the commercial banks as we have heard over the years; instead, the strategy involves providing an alternative investment instrument in place of the foreign ones. Hence, the hard currencies stay in Guyana for other productive uses. It is quite an ingenious strategy, by the way.

Nevertheless, the most a central bank can do is provide some wiggle room for the political class to get its act together. The exchange rate is depreciating under severe political pressure. This is making the life of professionals who would like to have a vacation a year overseas much more difficult.

Comments can be sent to: tkhemraj@ncf.edu

I listen to Granger's radio interview. I am sorry to say he endorsed Lowenfield's report to disenfranchise 115,000 voters but he still supports GECOM. Granger portraying himself as the only constitutional scholar in Guyana and no one else is above him.  He stressed that he deserves to win so he can continue to work. So, anything that gives him a win he supports.

Granger is making a mockery of the words - constitution, support, obey, laws, agree, but he never understands defeat or concede.

This is why I don't support the PPP nor the PNC. They can't be fooling us and get away with it. Let the CCJ begin its ruling tomorrow and whoever wins, the Guyanese electorates will have some closure.

LJP calls on GECOM Chair to dismiss Lowenfield
7 hours ago
Breaking News... Missing Documents, Look at this video and the images.
8 hours ago