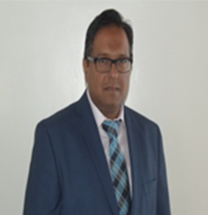 People’s Progressive Party/Civic city councillor Dimitri Ali was on Monday ejected from a statutory meeting over a purported attempt to take a photograph during the proceedings.

During the meeting Mayor Ubraj Narine observed a light coming from the councillor’s phone.

Narine then asked Ali if he was recording the meeting. In response, Ali said he was taking a photograph.

The Mayor indicated that like the media, which needs permission to attend the meetings, the councillor needed to seek permission before recording a session.

Ali, who refused to offer an apology, was later asked to present his phone to Chief Constable Peter Livingstone, to have the video or image removed in the presence of the Information Technology (IT) technician.

However, due to the absence of the IT technician, there was a delay in the process. Ali, who did not agree to apologize to the council or have his phone checked, remained seated for several minutes.

A motion was then tabled by A Partnership for National Unity (APNU) Councillor Heston Bostwick and second by Councillor Clayton Hinds to have councilor Ali removed from the sitting.

He was subsequently escorted out of the meeting.

Ali don't know how to follow rules and could later say he was treated unfairly. Shameless prick, is this how he want Georgetown to get better.

This is how PNC does things.  They are not accountable for anything they do.  They even don't want the Press to monitor them.

They just give the PPP an excuse to hold back the transfer of money to the city council for any so-called development.

So its okay to photograph or record PPP private meetings, without permission ?

The councillor did not need permission to use his camera.  He was part of the meeting.

So its okay to photograph or record PPP private meetings, without permission ?

Yes! They don't lie. They want the masses to know that they are open to everybody. The PPP is an inclusive Party and that's why they won the Election.

What an ASS!! Since when City Council Meeting is secret?? Dummies are dime a dozen on this shit Hole!!1

Try to photograph or record a PPP PUBLIC meeting, without approval and see what happens. Goatman and Mustapha were the  worse.

It must take a real big shit to come back to his shit hole, after Backdam dry from lack of rain.

In The next municipal election in Georgetown, the PPP/C will win. That will be a Historic moment for Guyanese.  When that happens all PNC deadbeat will have to go.

What an ASS!! Since when City Council Meeting is secret?? Dummies are dime a dozen on this shit Hole!!1

Nehrubhai, What is the name of that PPP MP who beat up two afro Police officers?

Sign In To Reply
Post
Current Visitors: 80 (3 members, 77 guests)
Welcome to the Original Guyanese Discussion Forums, first established in 1996. Here you can discuss, ask questions or generally debate anything related to politics, movies, music, health or just gyaff away your day/night here. A note of warning, the Political forum is not for the faint of heart.  We do have some rules, so please adhere to them .
Do not post any messages that are obscene, vulgar, sexually-orientated, racist, hateful, threatening, or that otherwise violate any laws. Do not post any messages that harass, insult (name calling), belittle, threaten or mock other members.

shallyv replied:
Ah, but dem PPP teeves iz smart! Dey nat like de stupid PNC teeves!
shallyv replied:
She ought to appeal to her President! Ali!
Mitwah replied:
Look at how the PPP has destroyed a woman who is single and trying to make an honest living. Why Dharamlall not offered her assistance...

Demerara_Guy replied:
Persian Empire The Persian Empire spanned from Egypt in the west to Turkey in the north, and through Mesopotamia to the Indus River in...