Pope Francis had slapped himself free from woman who grabbed him in St. Peter's Square on Tuesday stroll 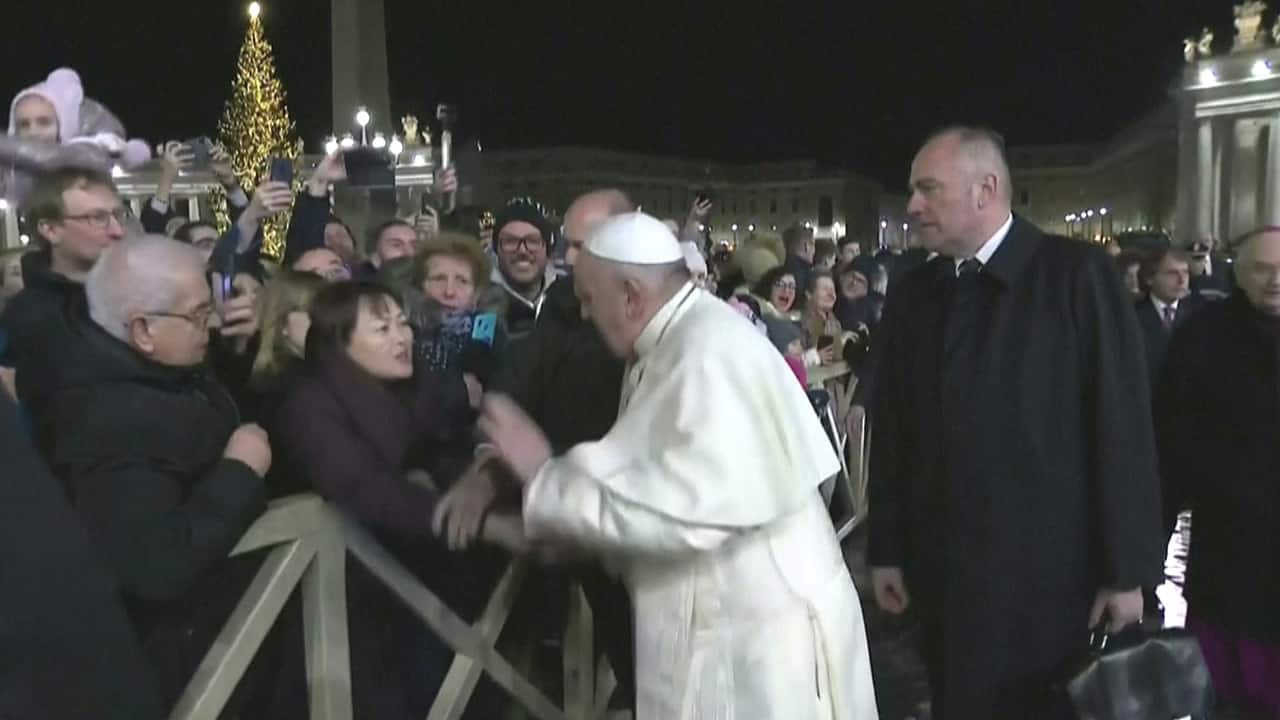 A visibly indignant Pope Francis had to pull himself away from a woman in a crowd in St. Peter's Square on Tuesday after she had grabbed his hand and yanked him towards her. 0:26

Pope Francis has apologized for hitting the hand of a well-wisher who grabbed him and yanked him toward her while he was taking a stroll in St. Peter's Square in Vatican City in Rome.

In his New Year's Day wishes to the public in the square, Francis confessed to losing his patience with the woman Tuesday while trying to admire the Vatican's Nativity scene.

Cameras captured the scene when the woman, from behind a barrier, reached out and grabbed the Pope's hand, pulling him toward her. Francis reacted sharply, exclaimed something and then slapped her hand so she would let him go. Frowning in anger, he turned and strode away.

In his impromptu remarks Wednesday, Francis said: "So many times we lose patience. Me, too." He then added: "I say 'excuse me' for the bad example" he gave in Tuesday's incident.

In his New Year's Day address in St. Peter's Basilica, Francis pinned much of his hopes for a more peaceful world in 2020 on women, saying violence against them is akin to profaning God and calling for them to be increasingly involved in making major decisions.

Francis decried the "many times women's bodies are sacrificed on the profane altar of advertisements, of profit, of pornography."

He also lamented that women are "continually offended, beaten, raped, forced into prostitution" or forced to have abortions, which are forbidden by the Catholic Church. 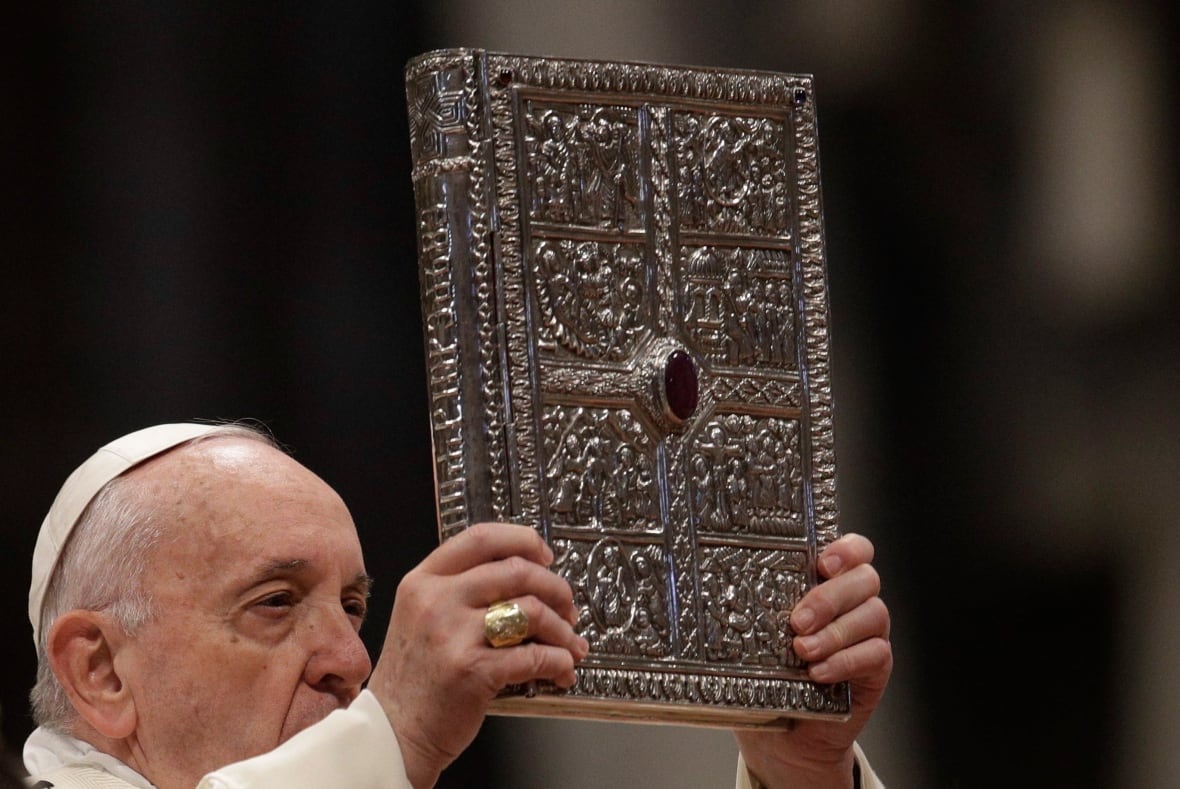 Pope Francis presides over a mass for the solemnity of St. Mary at the beginning of the new year in St. Peter's Basilica on Wednesday. (Gregorio Borgia/The Associated Press)

Francis didn't mention if, under his watch, things might change in how women are treated by the church.

According to Vatican teaching, women can't become priests, and some conservative elements of the church are scandalized by parishes that allow girls to be altar servers.

He contended if we want a better world in the new year, we should treat women with dignity. Francis urged that women become "fully associated" with decision-making to make the world more united and at peace.

"And if we want a better world, that is a house of peace and not a courtyard of war. May the dignity of every woman be at the heart of it," Francis said. "Women are givers and mediators of peace, and should be fully associated with decision-making processes."

If the Pope does not expect people to touch him, he should not walk among them but remain steadfastly enclosed in his Popemobile. Pope not accustom to women holding his hand.

I agree she was a bit forceful, and the way things happen these days one can never tell.

This Pope is actually a real nice person. Siggy nah guh like he though because dem don’t think Catholics are going to heaven. 😀

A personal happy new year's greetings to you D_G for old time sake.

The poke should feel lucky somebody pullin him

The poke should feel lucky somebody pullin him

Maybe he prefer pushing than pulling.

A personal happy new year's greetings to you D_G for old time sake.

While there are indeed differences in views/opinions, it is my belief that we are all here on GNI to exchange our perspectives on issues plus to have a jovial time.

It is not the first and only time he has displayed such attitude in Rome and abroad.

One should firmly know that such thing will always occur in these settings.

Sign In To Reply
Post
Current Visitors: 35 (0 members, 35 guests)
Welcome to the Original Guyanese Discussion Forums, first established in 1996. Here you can discuss, ask questions or generally debate anything related to politics, movies, music, health or just gyaff away your day/night here. A note of warning, the Political forum is not for the faint of heart.  We do have some rules, so please adhere to them .
Do not post any messages that are obscene, vulgar, sexually-orientated, racist, hateful, threatening, or that otherwise violate any laws. Do not post any messages that harass, insult (name calling), belittle, threaten or mock other members.
Do not use profanity, racial, ethnic, religious, or other slurs and stereotypes, or post sexually-oriented material, masturbatory and excretory references, or any other offensive material.

Join Now
Mr.T replied:
You are getting confused between Guyanese English and American English. Vish is trying to say that he went to Guyana to knock off a few ...

cain replied:
When you say, a brief visit is wuh you mean, you visit people wearing yo briefs only?

cain replied:
I havin oral surgery tomorrow afternoon so no eating much through weekend, so I staying up an eat everything I could find. I opened a...