Police officers yesterday conducted a “Traffic Enforcement Exercise” on the Essequibo Coast. It resulted in 20 cases being made against delinquent drivers. 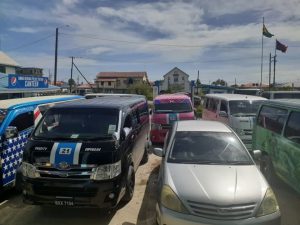 Drivers being lectured by police 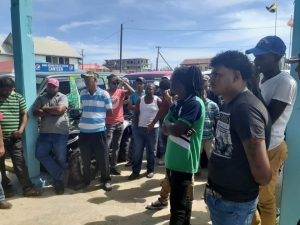 Drivers being lectured by police

The cases that were made against the drivers are Breach of condition of road service, Overloaded Minibus, Unlicensed conductor, Maintenance of motor vehicle, Faulty packing of load, Maintenance of tyre, and Breach of insurance among others.
The drivers were also subjected to a lecture session by Inspector in-charge of Traffic Regional Division #2, Inspector Troy Griffith, Sgt. Romace Davidson and Pastor Mohamed Ally of the Cops and Faith Community Network in the Anna Regina Police Station Compound.
During the discussion, the drivers were edified on a number of topics related to the proper use of the roadways such as exceeding the speed limit, driving under the influence of alcohol or drugs, overloading of vehicles, adherence to the rules of the road and proper maintenance of vehicles.
Meanwhile, the Ministry of Social Protection’s Counter-trafficking in Persons Unit, yesterday held an historic one-day training programme for police traffic ranks.
The training programme is the first of its kind for traffic ranks.
Deputy Permanent Secretary of the MoSP, Adrian Ramrattan, noted in his remarks that traffic ranks are uniquely positioned to combat trafficking in persons, since most trafficked persons are transported by vehicles.
Commissioner of Police, Leslie James, also commented on the historic significance of the training. He highlighted other areas in which the Guyana Police Force was involved in efforts to combat trafficking in persons (TIP) throughout Guyana.
Coordinator of the MoSP’s Counter-Trafficking in Persons Unit, Tanisha Williams-Corbin gave an overview of the day’s training, which she said was intended to help traffic ranks to understand the pivotal role which they played in tackling TIP.
In creating history through the training programme, Ms. Williams-Corbin said that through training, ranks would be able to identify TIP, report TIP and assist in tackling TIP.

This woman predicament preceded 2015.
5 minutes ago

He was a member of GNI and I heard a little about his involvement in the free house project. They say a silent giver or builder for the...
7 minutes ago

GNI Warrier is a black guy who continue to build houses for Indians in Guyana. Its too bad he don't tell us about his projects, after...
20 minutes ago

UPDATE: Parties to comment on poll cards dumped in Arima (Trinidad)
17 minutes ago

Guyanese Female calling on Suriname President for help.
19 minutes ago

GuySuCo needs additional $1.6b up to end of year to stay afloat -Agri Minister
30 minutes ago