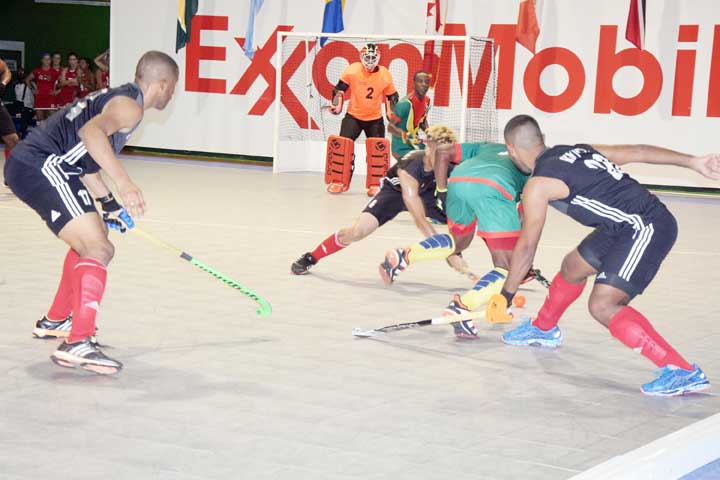 By Calvin Chapman
Guyana national team’s chances of qualifying for the International Hockey Federation (FIH) Indoor Hockey World Cup in Berlin, Germany, suffered blows after they both lost their round robin matches competed in yesterday.

The National Women’s side had it more rough as they not only lost their third round robin match against defending Champions Canada, but their star player Aliyah Gordon was stretchered off the plastic tile surface during the first half of their 2-0 loss. Gordon had injured her knee in Guyana’s 3-0 loss against Argentina on Monday evening and it was surprising that she managed to feature any amount of minutes during the game.
The Canadians scored both their goals during the first half of the game (6th minute) and Kathleen Leahy (15th minute) both managing to get a field goal each past Alyssa Xavier. The 2-0 final score line could’ve been a lot more worse if it wasn’t for the brilliance of Guyana’s goalie Xavier, who pulled off no less than 10 saves during the match to keep her team hopes alive of a comeback victory but little presence in the Canada’s D and limited individual brilliance all contributed to the loss.
Meanwhile, later in the day, the men suffered their first loss of the tournament after succumbing to a second half onslaught by Trinidad & Tobago (T&T) 4-0. Both the Male and Female Guyanese goalkeepers have been superb in this tournament and Medroy Scotland continued with his individual brilliance and allowed Guyana to come out unscathed in the first half with save after save. In the early moment of the match Guyana were in charge but didn’t convert their chances.
The second half of play was T&T all the way and Scotland had his work cut out for him as Aidan De Gannes (25th minute) put the twin island republic ahead with a field goal and Jordan Reynos slotted home a Penalty Stroke perfectly into the bottom left V to double their lead two minutes later which winded the Guyanese.
As the Golden Arrowhead representatives fought back to overturn the deficit, field goals from Mickell Pierre and Jordan Vieira in the last minute of the match, helped T&T make the final score more imposing.
Guyana men will clash with Mexico at 17:45hrs today, while the women will play Barbados at 19:00hrs.

Totaram replied:
Read the article on Jonas' lawsuit and then join the conversation. He is/was arguing that the president doesn't have the authority to...
$34M per month for Giftland to supply electricity to national grid
15 minutes ago