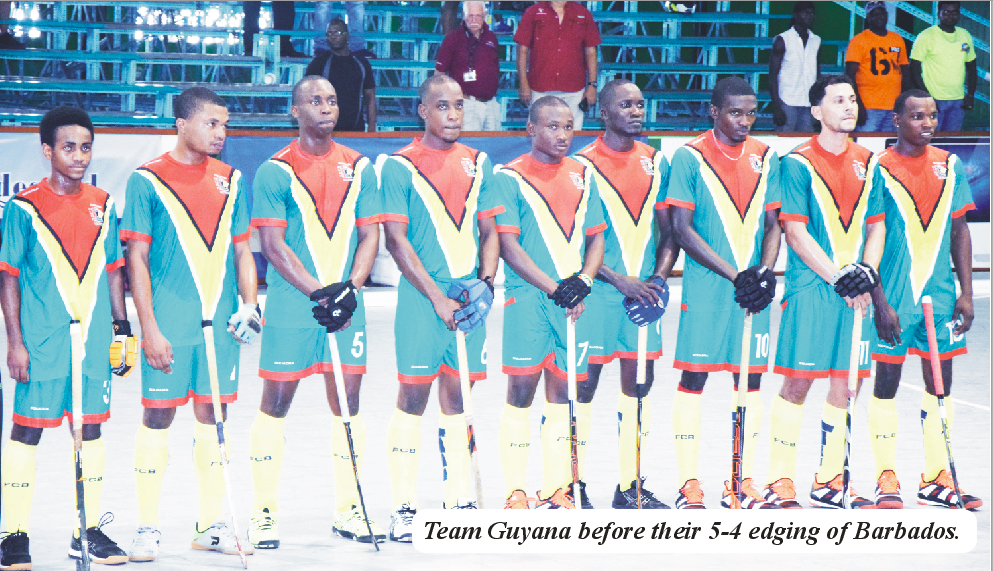 By Calvin Chapman
Guyana’s National teams had mixed fortunes in their respective Male and Female round robin matches on the opening day of the 7th Pan American Indoor hockey championships which serves as the International Hockey Federation (FIH) world cup qualifiers.
The men had success when they edged Barbados 5-4 to begin their bid for the India World Cup 2018 on a positive start. However, coming against a team who has only been training for six (months), Guyana, the reigning Bronze medalists would’ve expected to dominate the visiting minnows.
Captain of Guyana, Robert France, steered the bumpy ride with a hat-trick of field goals that were all expertly slotted home, in the 6th, 14th and 36th minutes. Hilton Chester and the skilful Jamarj Assanah smashed a field goal and a penalty corner respectively to see Guyana hold for a win against one of the tournament debutants, Barbados.
Early on, Guyana led the bajans 3-0 in the 24th minute of the 40 minutes game but a spirited fight back spearheaded by a double from Che Warner (A penalty strike and a field goal) along with a field goal from Akeem Rudder which was the fruit of hard pressing, allowed the Bajans to tie the game within 7 minutes. But the Guyanese played more expertly than the novice Bajan team and anything less than a win would’ve been disappointing.
The talented Aroydy Branford pulled off some superb solo runs and dribbles which wooed the reasonably sized crowd at the Cliff Anderson Sports Hall, who were witnessing their first ever Hockey World Cup qualifiers, but those exploits didn’t convert into goals.
“I’m not satisfied with the overall performance, we had a lot of opportunities that we didn’t take and it almost came back to bite us in the end, but we held our composure and came out with the win and that’s most important”, stated Guyana’s captain, the hat-trick hero, Robert France.
Meanwhile, head coach of Guyana men, Robert Fernandes, is not bothered with the closeness of the result. He mentioned that the first match is sometimes nervy for a team and Guyana will keep improving as they continue to compete as they seek a world cup berth.
Guyana Women
The ladies had a torrid time on the opening day, losing both of their matches played. Their first defeat was somewhat of a replay of their practice match against Uruguay on Friday that finished 2-1 in favour of the Spanish speaking nation. Yesterday morning, Guyana lost 4-3, with a Penalty Strike in the dying seconds by Constanza Barrandeguy, gifting the Uruguayans double success.
Scoring for Guyana were Nicole Eastman, Aliyah Gordon and Trisha Woodroofe. Meanwhile, Augustina Nieto, Maria Viana Ache and Milagros Algorta scored before Barrandeguy fired in the winning penalty.
Seven (7) hours later, the ladies lost their second match of the day 3-0 against Argentina who played more dominating than Uruguay and didn’t give Guyana much time to sniff around their goal. Julieta Luna, Maria Narvaez and Josefina Castaneda scored a field goal each in the win for the powerful Argentina side.
Canada Men off to lethal start
Defending Men’s champions Canada began their title defence with a resounding 10-0 thrashing of the developing Mexico team. Canada played the way you would expect a reigning champion to against minnows. Although Mexico showed good signs of promise for the future, no way they could’ve overcome the Canadians.
“We got here Thursday and got a lot of practice sessions on the court to get used to it including the heat. It’s good to get our first game under our belt, we haven’t played since 2015, but we hope to keep improving as the tournament moves forward,” captain of Canada, Ken Pereira explained to Kaieteur Sport.
The tournament continues today with six (6) matches from 13:00hrs and the last game beginning at 19:15hrs. Defending women’s champion Canada will clash with Guyana in the first match of the day in an encounter that is expected to action packed, as the host women look to get some points in their 3rd round robin match.

Totaram replied:
Read the article on Jonas' lawsuit and then join the conversation. He is/was arguing that the president doesn't have the authority to...
$34M per month for Giftland to supply electricity to national grid
4 minutes ago