Forty-four years of the NIS

Introduction
September marked forty-four years since the National Insurance Scheme was launched by Prime Minister Forbes Burnham’s Government. It also marked twenty-one years of the control of the NIS by the PPP/C Government and the Chairmanship of another Forbes, this time bearing the surname Luncheon. The latter and a hard core of directors have led the NIS into a state where the Pension Reserves are now being used up by about two billion dollars per year. The saving grace for the reserves is that short-term and industrial benefits paid out annually are generating surpluses that help to compensate for the reductions in the Pension reserves.

The NIS was established as an actuarial scheme, i.e. one that seeks to balance out its long-term liabilities against its assets and revenues. The way this is achieved is by way of periodic – usually five yearly – evaluations carried out by external independent actuaries. The process is very scientific and involves a review all the data on active and past contributors, past and projected future income and expenses – of which pension benefits are always the more significant item – leading to recommendations generally designed to maintain/restore the actuarial balance of the Scheme.

Ignore, ignore, ignore
The last three such reports and recommendations by the independent actuaries were done at December 31, 2001, 2006 and 2011. The recommendations were largely ignored or worse treated by Roger Luncheon and his directors with such disdain that it seems clear that they have no idea or respect for their fiduciary duties and were just there for the ride. Apart from Luncheon himself there are three other directors who have been on the Board since 1992/93 – Paul Cheong and trade unionists Messrs Komal Chand and Earl Welch. Their contribution is hard to measure.

They and their fellow directors have largely sat back and allowed Luncheon and the Government acting as the shadow director to make – or not make – the important policy decisions, including those on the recommendations of the actuary. Even as the Scheme started to show signs of strain, the Government undermined the board and the viability of the Scheme by straight political considerations. Ironically it seems that the actuary was more exasperated than the directors were offended by the usurpation of their powers by the Government and its refusal to take action on the recommendations.

It is not as if Burnham treated the Scheme more seriously than the PPP/C. But wrong as he was, he had the luxury of time on his hand – any Scheme takes years to mature and no one qualified for a pension until s/he has made 750 equivalent weekly contributions or about fifteen years. In 2004 Ram & McRae described Burnham’s attitude to the Scheme was to treat it as banker of first resort, commandeering its funds with low deferred interest, a practice that a group of us (Nanda Gopaul, Lincoln Lewis and me) sharply criticised in a report we did for the TUC.

Maturation of the Scheme
By 2001 when the Sixth Actuarial Report was published the Scheme was maturing and there were more than 22,000 persons in receipt of pensions. This number had grown to 32,899 ten years later while the average pension paid has increased from $10,849 per month to $23,170 per month. Additionally the rate of growth of new contributors had either slowed or gone into reverse with obvious implications for the scheme. Recognising the cumulative challenges to recover from Burnham’s policy and the changing demographics, Ram & McRae in 2004 recommended to then Finance Minister Sais Kowlessar and the Government that they inject a substantial amount of cash into the Scheme from some of the EHIPC funds which were then available.

The firm warned against the Scheme’s bankruptcy unless it was revamped, refinanced and restructured. But that too was ignored. Eight years on, this is how the reserves are looking. 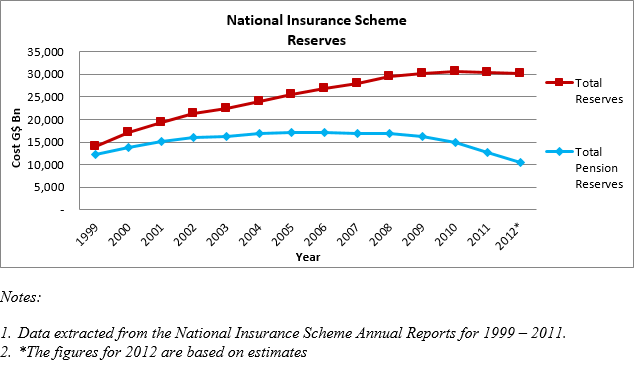 In response to the 2006 Review and to stem criticisms of inaction, the Government appointed a Committee of independent persons who then made the following principal recommendations:

• Increase the age for the receipt of Old Age Pension to 65 years and Public Servants who retire at 55 years be allowed reduced pensions. The Committee expected the special arrangement to be phased out in about 10 years.

• The Scheme should be allowed to invest overseas.

• Aggressively insure the approximately half of the country’s workforce who are self-employed.

• Increase the number of contributions required to qualify for a pension.

• Absorb the Dependents Pension Fund into the NIS by a formula satisfactory to all stakeholders.

• Change the definition of “Relevant Wage’ so that the amount of the pension is reduced.

Again, no action and by that time the Eighth Actuarial Report and recommendations as at December 31, 2011 had been received. This time, the warning from the actuary had more urgency and stridency but the recommendations were met with objections from several quarters, including the private sector and the labour movement. It was an ideal setting for limited action by the Government as set out below.

In his 2013 Budget Speech the Minister of Finance offered a subsidy to the Scheme in the form of a 1% contribution for persons whose income is less than $50,000 per month. This measure came into effect from June 2013 and it is expected to reduce the deficit by some four hundred million dollars and combined with the 1% increase on contributions generally should help to reduce the rate of depletion of the Scheme’s reserves. Regulations to give legal effect to these changes are pending.

Indecision is not the only bugbear facing the Scheme. Bad decision just happens to be the flip side of the same coin. For years now, the Scheme has lost income on a deposit investment of some six billion in the failed CLICO. Almost as a set-off it was given the CLICO building bringing the investment and accrued income down to around $5,200 million dollars. Neither the Chairman not the Minister of Finance under whose portfolio the Scheme falls has said anything about the recovery of this sum. If that sum has to be written off, the Scheme’s reserves would take a huge dent.

Conclusion
The path forward is full of dangers and uncertainties. The current Board has clearly run out of ideas and should be replaced. The administrative structure of the Scheme has to be modernised. A decision has to be taken on the CLICO receivable since keeping it on the books seems increasingly meaningless. Maybe the 2007 Committee should be called back into action with a clear mandate and an undertaking from the Government that its recommendations this time around will be taken seriously.

Continuing to do nothing is not an option.

Sign In To Reply
Post
Current Visitors: 116 (3 members, 113 guests)
Welcome to the Original Guyanese Discussion Forums, first established in 1996. Here you can discuss, ask questions or generally debate anything related to politics, movies, music, health or just gyaff away your day/night here. A note of warning, the Political forum is not for the faint of heart.  We do have some rules, so please adhere to them.
Privacy Statement - Rules
Join Now
Village Belle Wow five grandkids,, that was fast, congrats. Now we are tie with grandchildren. Eid Mubarak!
41 minutes ago