Oronoque Slingez FC through to next round 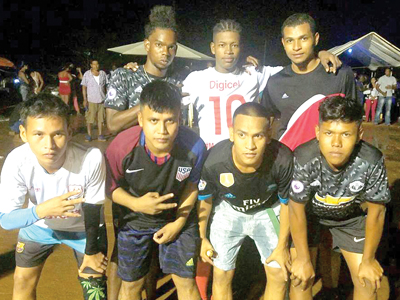 Members of the Oronoque Slingerz side following their win.

Oronoque Slingez FC through to next round

The Matarkai Sports committee 2nd annual floodlights street football began with a bang at Oronoque Tarmac on Boxing Day as defending champions Citrus Grove Young Gunners lost their game to the young and talented Oronoque Slingez FC on penalty shootout after both teams were tied at regulation time.

Eon Gill was the lone player who scored for Oronoque Slingerz FC, while the defending champs missed all their opportunities.

The games were well supported by fans and continued with Citrus Grove Young Gunners FC, Matthews Ridge Gold Diggers, Matthews Ridge FC and Pk United battling for a spot in the finals on January 1.

Join Now
Current Visitors: 143 (1 member, 142 guests)
Spiritual Shortsightedness Luke 12:13-21 Myopia, or nearsightedness, is a condition in which the eye cannot focus on distant objects.
18 hours ago

Yes i did attend Sunday school at one time at a very young age. But i have no memory of ever been told that. Reading the Bible, to be...
2 days ago

Did you not mention a while back that you attended Sunday school? I would assume you also read the Bible. Mary, the mother of the Lord...
2 days ago

Salvation Gifts 1 Peter 1:3-5 Gifts are an expression of love, yet sometimes we take them for granted. This is certainly true when it...
2 days ago