–Clause not found in Agreements of more than 15 countries 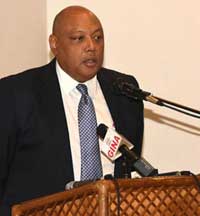 ExxonMobil has been continuously criticised for burying some of its financial records in nations with strict nondisclosure laws. In fact, several countries have expended millions of dollars in the court system trying to access such documents.

The frustration experienced in waiting years to access the entity’s records have forced some governments to insert into their Production Sharing Agreement (PSA), clauses which expressly state that all financial records should be available to the government and its auditing parties.

But in Guyana’s Production Sharing Agreement, a most interesting turn of events has taken place.

Instead of securing access to all of ExxonMobil’s financial documents, regardless of location, the Government of Guyana agreed to relinquish all rights to go after documents in relation to operations here.

In other words, the Government of Guyana has agreed to limit the scope of any audit it may pursue.

That section outlines the various guidelines the Government, specifically the Minister of Natural Resources must follow in carrying out audits on the company.

While the Minister must give the company three months notice before commencing the audit, Annex C states, “Nothing herein shall entitle the Minister or his auditors to have access to data and records which: I) are subject to statutory restrictions on disclosure or ii) do not relate to petroleum operations; or iii) are not customarily disclosed in auditing practice in the international petroleum industry…”

OTHER CASES
What has also turned out to be troubling to some local commentators is the fact that the aforementioned clause has not been found in the production sharing agreements of more than 15 countries.

These include but are not limited to Uganda, Indonesia, China, Tanzania, Angola, Papua New Guinea, Chad, Nigeria, Sudan, Yemen, South Sudan, Mozambique, Kenya and Chad. (To see some of the PSAs of these nations, follow this link: http://www.oilnewskenya.com/pr...eements-east-africa/)

Instead of securing access to all of ExxonMobil’s financial documents, regardless of location, the Government of Guyana agreed to relinquish all rights to go after documents in relation to operations here.

In other words, the Government of Guyana has agreed to limit the scope of any audit it may pursue.

Perhaps, the vision of Trotman and group for Guyana's development.

WOW...this is alarming and ridiculous , for a govt to sign such an agreement. But I believe Trotman is an expert on contracts because he took a summer course on negotiations at Harvard...he fully prepared.

Is the Cabinet not involved in the approval?

Why does anyone think the discovery if oil puts Guyana in the driving seat.  It does not!  Guyana’s oil is expensive to extract and the long term bias for higher oil price is not there.  Follow what’s happening globally.  The US is now pumping more oil than ever.  OPEC is cutting back to support price. Other non-OPEC are trying to expand their market share.  Iran is trying to reclaim its position and markets. The world currently have an over supply of about 2mil bpd.

Guyana has to cochore Exxon to “keep hope alive.”  Exxon is being circumspect on how much and how fast it wants to invest.  The have a balance sheet and p&l to manage.

Guyana is in a weak position vs Exxon so Exxon will call the shots, not the GOG, be it PPP or PNC.

When you give JACKASSES to run a Country then expect INCOMPETENCE and MISERY!!!

When you give JACKASSES to run a Country then expect INCOMPETENCE and MISERY!!!

Base, I deal with the PNC for many years, there is not a more incompetent, dumb and stupid Group on this Planet!!!

Welcome to the Original Guyanese Discussion Forums, first established in 1996. Here you can discuss, ask questions or generally debate anything related to politics, movies, music, health or just gyaff away your day/night here. A note of warning, the Political forum is not for the faint of heart.  We do have some rules, so please adhere to them.
Join Now
Loading...
Current Visitors: 64 (3 members, 61 guests)
A win for Bernie is a win for Trump. Bernie represents Joe Stalin, lenoid Brezhnev, Fidel Castro and C. Jorgon. All relics of the dust bin.
15 minutes ago

Move bai move
3 hours ago
I could see why folks say Sanders supporters are vicious and nasty...very much like Trump supporters Trump and Sanders cut from the same...
3 hours ago

GECOM has no list of polling places or polling stations on its site. I have to rely on the information provided by Anil Nandlall, whom I...
3 hours ago
I tried to find a list of Polling Stations on GECOM site and there is nothing to see. Post the link you showed and let us know if the...
3 hours ago
Another Massive win for we bai Bernie and he winning Texas too
15 minutes ago

Sanders will destroy the Democrat Party
3 hours ago

6 seconds to vote
3 hours ago

East Indians when you go out to vote, remember this.
4 hours ago

What Trump is saying about the Nevada caucuses
4 hours ago