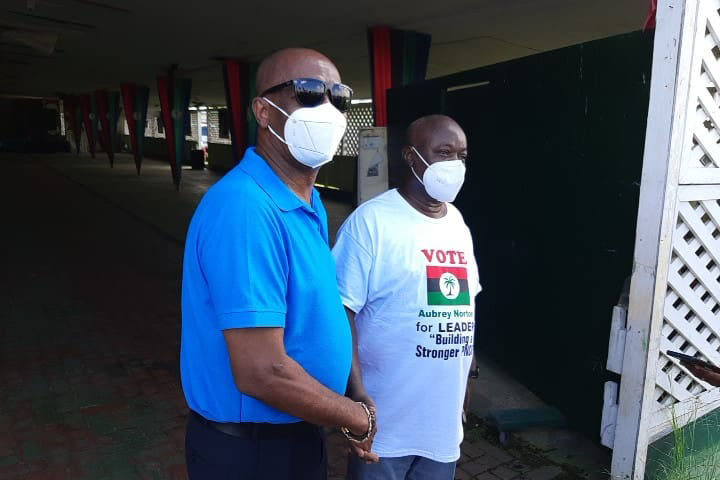 May the best man win? Two of the three contenders for the leadership of the People’s National Congress Reform (PNCR) Joseph Harmon (at left) and Aubrey Norton shaking hands during the party’s Nomination Day process at Congress Place on Friday. The other candidate for the post of leader is Dr Richard Van West-Charles. The party will elect a new leader at its upcoming 21st Delegates’ Congress. (Photo by Marcelle Thomas)

With long-awaited party polls set for next month, the three leading candidates to be the new PNCR Leader were yesterday nominated by various party groups and former General Secretary Aubrey Norton appeared to have the most public support.

The Nomination Day proceedings also confirm-ed that incumbent leader and former President David Granger will not be running for another term. Granger is also on leave from the party.  Once considered a favourite for the post of leader, there was also no sign that the current PNCR chair Volda Lawrence will be contesting.

Norton and the other main contenders, Opposition Leader, Joseph Harmon and former PNC Health Minister Dr Richard Van West-Charles declared that win or lose, they will unite in the opposition’s fight against the PPP/C government.  They, however, differed on if that person should also be Opposition Leader. Analysts say that were Norton to win the leadership, that would spell the end of Harmon’s tenure as Opposition Leader.

Norton, Harmon & Charles, is like old wine in a new bottle. Norton seems to be the popular choice.

Norton, Harmon & Charles, is like old wine in a new bottle. Norton seems to be the popular choice.

December 11 ,2021 the delegates votes will decide who will be the Leader of PNC ,the party need a strong leader ,Norton is the best choice.

There are rumors Harmon is compromised .Charles have his father-in-law baggage to fetch.

Norton, the lesser of all evil. will be the next leader.

Aubrey Norton blocked by MoneyGram from receiving US$500

-likely as a result of anti-money laundering law

Candidate for the leadership of the PNCR, Aubrey Norton says that he was on Saturday blocked by MoneyGram from receiving US$500 and does not believe it was regulatory procedures being adhered to but an abuse of this country’s  anti-money laundering laws that speak to politically exposed persons.

He had on Saturday taken to social media to call for a boycott of the remittance service here.  “I had my own experience with political discrimination at MoneyGram this morning. I went to a MoneyGram location. I gave the cashier the reference number which she placed in the computer. She immediately said you are Aubrey Norton a political figure I can’t gave you any money since headquarters has to approve before I can pay you. She proceeded to tell me this is so because I am a political figure,” he said.

Sign In To Reply
Post
Current Visitors: 47 (2 members, 45 guests)
Welcome to the Original Guyanese Discussion Forums, first established in 1996. Here you can discuss, ask questions or generally debate anything related to politics, movies, music, health or just gyaff away your day/night here. A note of warning, the Political forum is not for the faint of heart.  We do have some rules, so please adhere to them .
Do not post any messages that are obscene, vulgar, sexually-orientated, racist, hateful, threatening, or that otherwise violate any laws. Do not post any messages that harass, insult (name calling), belittle, threaten or mock other members.
Do not use profanity, racial, ethnic, religious, or other slurs and stereotypes, or post sexually-oriented material, masturbatory and excretory references, or any other offensive material.