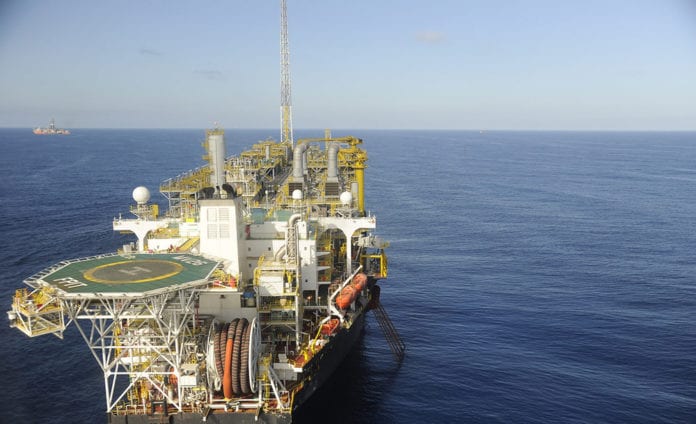 The Liza Destiny FPSO moored offshore Guyana at the Stabroek Bock is producing oil at the Liza Phase 1 Development.

Photos and video clips published on social media on Thursday showing a dark substance on water just off the coast of Georgetown is not from offshore exploration and production activities, according to a statement from ExxonMobil on its Facebook page on Friday.

“We can confirm that all activities related to production offshore are operating under normal conditions,” the company said, adding, “We monitor our activities real-time, have looked into the concerns raised yesterday and can confirm there were no spills from our operations.”

OilNOW understands that the Civil Defence Commission was made aware of a discharge of a substance close to the Demerara River at  approximately 0.5 miles North of the Marriott Hotel, Georgetown, on Thursday.

The Guyana Defence Force Coast Guard was contacted, and a reconnaissance was conducted in the potentially affected area. The reconnaissance was carried out within a 5 square NM area which extended to 0.5NM North of the Mariott Hotel to 5NM North then 5NM West then South.

At the mouth of the Demerara River, the Coast Guard observed what appeared to be a substance which caused a thin sheen-like appearance on the water; other than this sighting, no other suspicious activity was seen.

In keeping with the established disaster management response protocol within Guyana’s EEZ, the EPA and MARAD were also called upon to conduct an assessment of the area.

Anyone from Guyana did an investigation and made a statement?

Anyone from Guyana did an investigation and made a statement?

OilNOW understands that the Civil Defence Commission was made aware of a discharge of a substance close to the Demerara River at  approximately 0.5 miles North of the Marriott Hotel, Georgetown, on Thursday.

Obviously, there is an abnormal substance in the water close to the shore. A test needs to be done to determine what it is. Seaweed is an oceanic vegetation and NOT a SUBSTANCE!

Join Now
Current Visitors: 163 (0 members, 163 guests)
Even though some may see Charrandas as some great hero, no one trusts him now..an dats a fact Jack.
4 hours ago

Indeed, indeed indeed Ms. Rochelle. "Doffs my hat and bows with a slight incline" It is just a snap-shot and the beginning of new things...
4 hours ago

She should help her husband by stopping dat dam four..five roti fo' breakfast and also the other five ..six fo dinner.
4 hours ago

You're sitting in Canada and lying for these people. As time goes by and Corruption is exposed, a few of us will be here to reprimand...
4 hours ago

There is a new sheriff in town. In his inaugural speech, President Ali outlined his plans to prevent corruption. I can see that you are...
4 hours ago
My girl Tulsi
1 hour ago

WILL THE PPP BE AS CORRUPT AS THEY WERE BEFORE???
4 hours ago
Rambarran demands over $52M rent for Ocean View...
5 hours ago