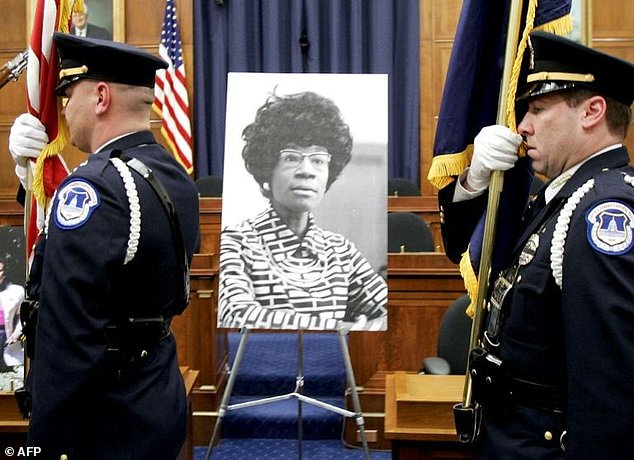 Shirley Chisholm, whose portrait is pictured at her memorial service in 2005, became the first woman to run for the Democratic Party's nomination for President of the United States

Determined to erect monuments to a more diverse group of history makers than simply white men, New York announced Friday America's first black congresswoman was getting a statue in Brooklyn.

Shirley Chisholm, who was also the first woman to seek the Democratic nomination as president, will be honored with a statue at Prospect Park.

"She is exactly the kind of New York woman whose contributions should be honored with representation in our public spaces."

De Blasio, a progressive Democrat, ordered a review into public monuments after deadly violence at a neo-Nazi rally in Virginia in 2017 fueled momentum to remove symbols of the pro-slavery Civil War-era South.

Chisholm was born on November 30, 1924 in Brooklyn, the eldest of four daughters of a factory laborer from Guyana and a seamstress from Barbados.

She got an MA in early childhood education from Columbia University and was first elected to Congress in 1968, representing New York's 12th congressional district until 1983.

In 1972, she became the first woman to run for the Democratic Party's nomination for president of the United States.

An artist will be selected to design the statue and announced in 2019, and the monument will be erected by the end of 2020.

The city's department of cultural affairs has committed up to $10 million over the next four years to commissioning new permanent public monuments and commemorations, with others to be announced in due course.

In April, New York removed from Central Park the statue of a 19th century gynecologist who experimented on enslaved black women without anesthesia.

De Blasio's review recommended that the statue of J. Marion Sims be relocated to a Brooklyn cemetery, where Sims is buried, and steps be taken to explain the legacy of a man considered the father of modern gynecology.

New York has kept in place statues of Christopher Columbus and former US president Theodore Roosevelt, both seen in some quarters as symbols of racism.

A plaque dedicated to Philippe Petain -- a World War I hero who later collaborated with the Nazis -- also remains in place, albeit with additional signs to provide context.

While indeed a question for some persons, I posted relevant information about Shirley Chisholm on many apt topics on GNI; some waaaaay back when Amral had a yearly thread featuring the month for Black People.

Congratulations on this achievement for Shirley Chisholm.

Dove, Charisma and Nuff used to talk a lot about her.

She was a wonderful person. She makes us proud of ourselves

Sign In To Reply
Post
Current Visitors: 171 (2 members, 169 guests)
Welcome to the Original Guyanese Discussion Forums, first established in 1996. Here you can discuss, ask questions or generally debate anything related to politics, movies, music, health or just gyaff away your day/night here. A note of warning, the Political forum is not for the faint of heart.  We do have some rules, so please adhere to them .
Do not post any messages that are obscene, vulgar, sexually-orientated, racist, hateful, threatening, or that otherwise violate any laws. Do not post any messages that harass, insult (name calling), belittle, threaten or mock other members.

Join Now
Tola replied:
If Rama kant, how come you still hea and not in PPP paradise ?

Trump is a Guyanese?
1 hour ago