By Calvin Chapman
The 13th edition of the Youth Basketball Guyana (YBG), National Schools’ Festival was launched yesterday at the Cliff Anderson Sports Hall (CASH). Present at the simple but significant ceremony were head of YBG, Chris Bowman, head of the National Sports Commission (NSC); Chris Jones, head of the Ministry of Education (MOE) Physical Education department; Nicholas Fraser and representatives of the two sponsors; Edward B. Beharry & Company and Banks DIH Ltd. 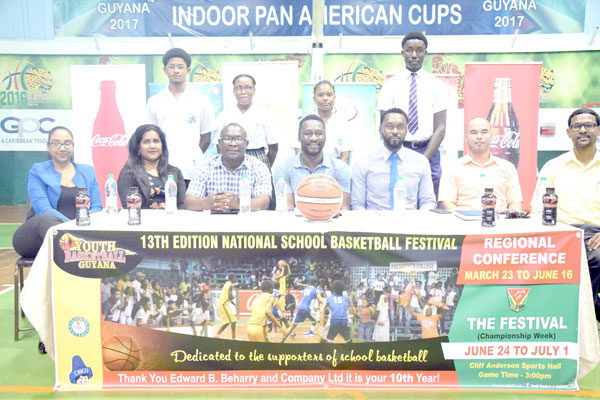 Representatives from the sponsors and government flanking co-director of YBG Chris Bowman (centre) with some of the student athletes that will be participating in the tournament at the background, during the NSBF launch at CASH yesterday.

Although they weren’t any representation from the Guyana Amateur Basketball Federation (GABF), Bowman noted that the Federation was happy to sanction the tournament which has been revolutionary in developing the sport at the grassroots level for over a decade.
Bowman shared during the launch that during this year’s festival which bounces off on March 23, all stakeholders are expected to see the continued acceleration of female basketball development since the ladies division which will see President’s College defend their title, is expected to have highly competitive matches.
Chase’s Academic Foundation that has had successes in cricket and football by winning respective nationwide competitions, will be making their debut in the festival this year and based on the efforts the school usually make in offering top athletes scholarships, a very competitive squad are anticipated to be fielded by the school.
NSC director, Chris Jones, noted that the entity is excited to partner with YBG because of their work at the grassroots level which is pivotal in sports development.
Meanwhile, MOE’s P.E. head Nicholas Fraser noted that, “After humble beginnings in the festival the Ministry (Of Education) is happy to see the vision of the YBG coming to fruition. This year we will be allocating extra resources to have a training programme for schools in collaboration with the YBG during the July-August vacation period.”
Chico Brand Manager, Reena Williams, within Edward B. Beharry and Company Limited, posted that, “Or Company is proud to be a sponsor of Youth Basketball Guyana for 10 years in a row. We will continue our partnership as we firmly believe in giving back to our youths. Sport, combined with education produces disciplined and committed young people, in both body and mind.”
In conclusion, Communications Manager of Banks DIH, Troy Peters, whose company will sponsor the tournament through their PowerAde brand, shared, “When I look at some of the youths that has come out of YBG and gone on to represent Guyana at IGG (Inter-Guiana Games) and CBC (Caribbean Basketball Championships) level, I applaud the efforts of the this body (YBG).” He further stated that, “Banks DIH looks to give back to the youths in any way possible, but Basketball is special to us and that is why we support wholeheartedly each year.”

Tola replied:
Do you know there is a real product called Kaka Poo, in the West where you relatives live. I have one somewhere in the house, that our...

Tola replied:
But the forum rules states that you can ban you self.

Tola replied:
Similar to most in the PPP, Rama is always in such a defensive mindset, that he can't perceive any other type of post. He even took it...

Tola replied:
This is the normal language for most in the PPP, led by the Barrat and also Mustapha. Their language, also to women, is the most rotten...