By Zaheer Mohamed
Danny Narayan struck an unbeaten half century to guide Ruimveldt to a three-wicket victory over Farm in the final of the East Bank Demerara Cricket Association (EBDCA) 50-over tournament which was contested on Saturday at Everest Cricket Club. 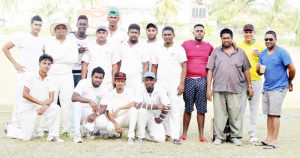 In pursuit of 173, Ruimveldt were staring down the barrel of defeat after they were reduced to 60-6, but Narayan anchored the chase with sensible batting in favourable sunshine. The right-handed Narayan shared in a 107-run partnership with Almando Doman as Ruimveldt finished on 174-7 in 41 overs to win the long awaited final.
Earlier, Farm decided to bat and openers Waqar Bacchus and Kenny Lawrence added 28 before the latter was removed by Deonarine Seegobin for 12. Seegobin then had Bacchus caught for 12 before uprooting the stumps of Ricky Debydial for five leaving the score at 54-3. Leg spinner Ershad Ali then bowled Vickram Debydial (01) before Mahendra Dhanpaul and Khemraj Singh steadied the innings somewhat with a stand of 45 before Alli ended their resistance by having Dhanpaul caught for 39 after hitting four fours and one six. Singh timed the ball well and picked runs on both sides of the pitch-he stroked five fours and one six in a top score of 57 before he fell to Tony Mootoo. Elvis Salik was the only other batsman to reach double figures with 12 as Farm were bowled out in 38.1 overs. Seegobin claimed 3-21 and Alli 3-37.
Dhanpaul and John Paton pegged back Ruimveldt chase- Dhanpaul disturbed the stumps of Avinash Bandoo (01) and Mootoo (00), while Paton trapped Don Paul (03) lbw. Dhanpaul then bowled Seegobin (00) while Feaz Mustapha was caught off Oslyn Baston for 21.
Ruimveldt then slipped into further trouble when Alli was bowled by Arif Peerbacchus for nine. Brimming with confidence at this stage Farm still had to get pass Narayan and Doman, two of Ruimveldt most experienced batsmen, and this proved a tedious task for Farm.
Narayan and Doman mixed aggression with defence and their re-union ended any hopes of a Farm victory. The duo started off watchfully and blossomed nicely as they entertained the small crowd with some handsome shots.
Narayan slammed seven fours and two sixes in his unbeaten 83 which came off 98 balls while Doman hit one six before he was caught off Bacchus for 36 with Ruimveldt four runs shy of victory, but man-of-the-match Narayan ensured Ruimveldt victory. Dhanpaul finished with 3-7.

I agree. Qatar and Dubai are good models.
3 minutes ago

Where did I mention money. There is a difference between money and livelihood. So go back in the logee. Why you even in America? This is...
9 minutes ago

The Chinese should stop eating snakes rass. Sars also came form them and was related to bats.
9 minutes ago

Undermining-- GUYANA NOT INVITED.
8 minutes ago
Exxon Mobil Seems To Be Hiding The Size Of Guyana's Gas, Cash Flow Could Exceed Expectations
9 minutes ago

Granger with Cuba's Communists.
10 minutes ago

US Congressional team meets with Opposition, Govt in Guyana
13 minutes ago

Dr Jagdeo and his team meeting with US Congressional Delegates.
14 minutes ago