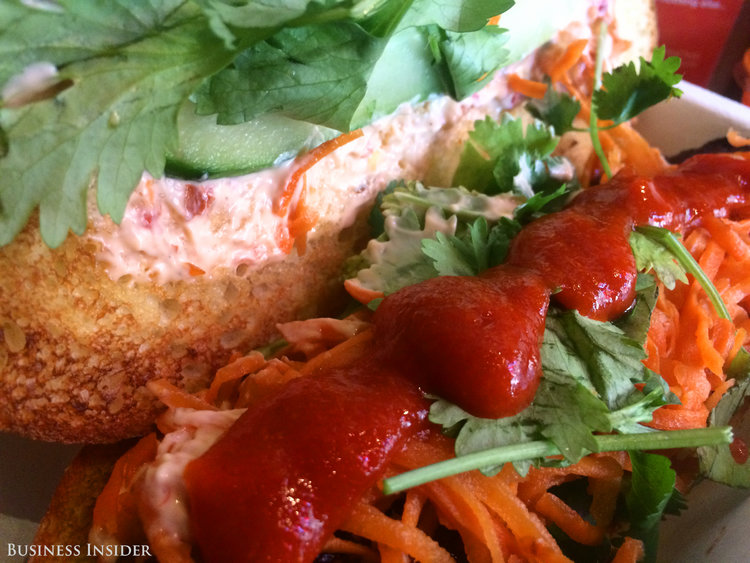 If this mouthwatering glimpse doesn't make you curious, nothing will. Hollis Johnson

Starting a business is tough — even more so in New York City. But Cambodian sandwich shop has managed to thrive and expand beyond.

And while this may not be the typical fast-casual joint — modifications are not allowed here — the chain has taken off with a loyal clientele. A new location that opened at the Prudential Center in Boston earlier this year could prove fertile testing grounds for further expansion.

It's no secret I'm a huge fan of Num Pang, and the frequency of my lunches there would be embarrassing if it weren't so delicious. I decided to head over to one and show why this sandwich chain is drawing some major attention, and why it could become a force in fast-casual dining in cities nationwide.

I headed to Num Pang's NoMad location at 1129 Broadway, which is dangerously close to our offices. Such proximity is a gift and a curse.

It's typically pretty busy, and I headed in in the prime lunchtime hours. The space is no-frills and small, but comfortable, with some wild graffiti art on some of the walls.

Despite the crowd, the line moved shockingly fast. It's a good thing I know the menu so well, or I would've been stumped when I got to the register. They offer a selection of regular sandwiches plus a bunch of seasonal specials, along with soups, salads, and both noodle and rice bowls.

The drink selection is pretty extensive, too — wine, beer, soda, and their amazing freshly squeezed juices and specialty drinks.

They bottle their own juice drinks, with delicious options like lemon gingerade, sweet mango, blood-orange lemonade, black tea, and a lemonade and tea half-and-half.

The wait was just as short, maybe five minutes. Depending on the rush and the order, it can take from four to eight minutes. I chose the peppercorn-catfish sandwich and the spicy grilled-pork rice bowl. And you have to grab their special hot sauce too.

First, the classic Num Pang sandwich. Apart from the meat or protein, the recipe is essentially the same with each sandwich. Each one is encased in a freshly baked semolina baguette with a perfectly crunchy shell and fluffy inside. There's a quinoa-bread option, too.

I can't have any of the sandwiches without Num Pang's wicked hot sauce. It's vinegary and acidic, but not unpleasantly so. It has a light chili flavor with a sharp and cutting heat that's the perfect addition to every sandwich on the menu. It's delicious as is, but the hot sauce takes the sandwich to the next level.

To see the simple beauty of Num Pang's sandwich, just open it up. The signature chili mayo is cool, yet holds a slow heat tempered by the cucumber slices and the bright cilantro flavor.

Underneath the hot sauce (applied by me) is a mound of pickled carrots atop a huge fillet of catfish lightly glazed with a sweet soy sauce and peppercorn. Despite being one of the best, it's also one of the cheapest sandwiches on the menu.

This is always my go-to favorite here. The catfish is always moist and flaky — perfectly cooked. The sweet soy sauce wonderfully compliments the strong, tangy heat of the hot sauce and chili mayo, all within the substantial baguette. The sandwich size is pretty big, but I always wish it were bigger if only to enjoy it longer.

The grilled-pork rice bowl is steaming hot, and the second the top comes off, the hypnotic smell of the jasmine rice billows out. The roasted vegetables are outstanding, and everything is lightly drizzled in a chili yogurt and chive-lime vinaigrette.

The pork is a tad tough but well seasoned, and while it's certainly spicy, it's a manageable heat made all the more pleasant by the yogurt.

Num Pang caters, too. And as a former intern myself, let me wholeheartedly agree with this napkin holder's sentiment.

The sandwiches are a perfect serving for a quick but incredible lunch — and the rice bowls are big enough to save half for later. In a word: perfection.

If Num Pang can manage to break out of the NYC region and hit urban markets elsewhere, they're sure to strike gold. Can Num Pang do it? Absolutely. Our eyes are on the Boston outpost — if that goes well, expect to see more soon.

Sign In To Reply
Post
Current Visitors: 209 (15 members, 194 guests)
Welcome to the Original Guyanese Discussion Forums, first established in 1996. Here you can discuss, ask questions or generally debate anything related to politics, movies, music, health or just gyaff away your day/night here. A note of warning, the Political forum is not for the faint of heart.  We do have some rules, so please adhere to them.
Privacy Statement - Rules
Join Now
Miss Ivy Leggs knows everything. Even before it happens.
6 minutes ago

Looking forward to Dave's early release.
7 minutes ago
The question is, will Pompeo and observers still be around by the time these frigen creeps do a recount or will they be so fed up they...
15 minutes ago

You don't want to give Guyana's policemen that power. They might become millionaires overnight.
24 minutes ago

I and everyone this site knows that being on this site is voluntary.
30 minutes ago

Indians in charge of Great Britain!!
6 minutes ago
Where's Dave?
7 minutes ago